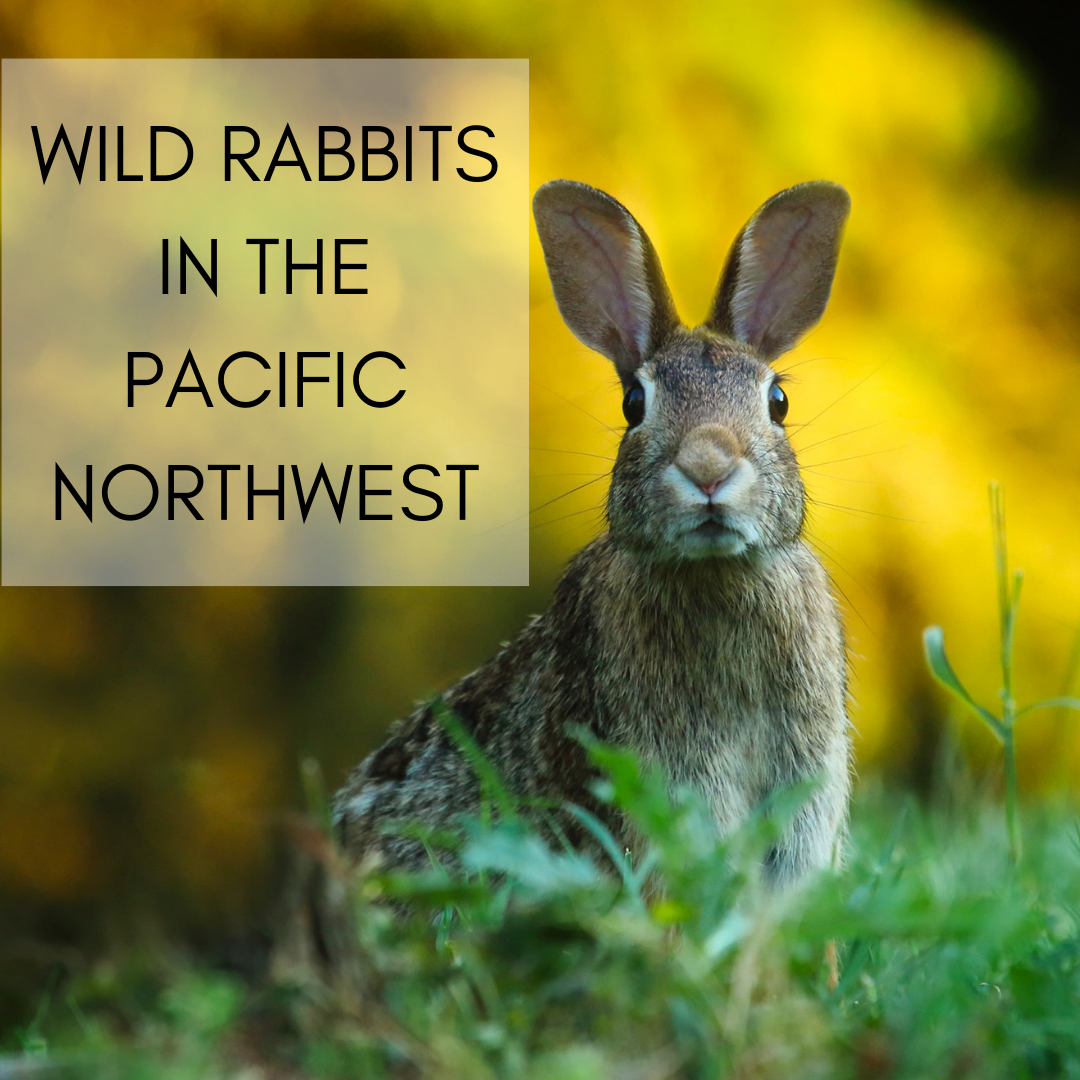 During the spring time, it’s particularly difficult for me to go a day without seeing a wild rabbit and on more than one occasion, Rooster has tried to catch a rabbit that ran by (he’s luckily had no success in catching anything but still tries every single time!). There are a few different wild rabbits that exist in the Pacific Northwest – some are native, others have been introduced. Two of the native rabbit species in the area are the pygmy rabbit and the nuttall’s cottontail.

The pygmy rabbit (Sylvilagus idahoensis) is the smallest rabbit species in North America and unfortunately, it’s also endangered. It primarily lives in the sagebrush areas of south-central Washington and this native species has long been struggling with their population numbers. In addition to helping other endangered wildlife, the Oregon Zoo had a recovery program for the Columbia Basin pygmy rabbit (Brachylagus idahownsis). In 2002, this recovery program was started in a partnership of the Oregon Zoo, Washington State University, Northwest Trek Wildlife Park, the Washington Department of Fish and Wildlife, and the US Fish and Wildlife Service. And the program has been pretty successful in increasing the pygmy rabbit population!

Another native rabbit in the Pacific Northwest is the Nuttall’s cottontail (Sylvilagus nuttallii), a rabbit that’s also known as the mountain cottontail. During the spring and summer times, they’ll eat grass, flowers, and farm or garden crops but in the winter, they’re significantly less picky and will eat almost any plant. As these rabbits often live where it gets quite cold in the winter, they have long, dense hair on their feet and like the pygmy rabbit, these rabbits also live in sagebrush areas or in patches of tall grass.

There are so many issues that impact native wild rabbits in the Pacific Northwest. As you might expect, habitat loss from ever expanding development is a huge issue for these animals (as it is for many others). The massive wildfires that happened this past summer also had a huge impact on pygmy rabbits and many other flora and fauna. And pets like cats and dogs have been known to have negative interactions with rabbits.

It’s also important that we leave wild rabbits alone if possible, even if you find a little burrow of baby rabbits. Like many other wild animals, mother rabbits will leave their babies alone for some time and this means that even if you find baby rabbits all by themselves, there’s a very good chance that they’re not orphaned. The best thing to do is leave them be! Their mother will come back for them.

If you are worried about a wild rabbit (whether that’s because an injury or the like), it’s important to contact a licensed wildlife rehabilitator instead of trying to fix the problem yourself.

But one issue that’s unfortunately too prevalent both here in the Pacific Northwest and many other places is the introduction of non-native species, usually by people who are tired of their pets. Many pets, like domesticated bunnies, aren’t meant to be wild and in addition to facing threats like predators, these abandoned pets greatly impact the local wildlife. Both Washington and Oregon actually have laws against abandoning animals; in Washington, it’s a gross misdemeanor to do so and in Oregon, it’s a Class B misdemeanor.

I’ve said this before but instead of releasing your pet of any kind into the wild, there are other options for you if you find yourself unable to care for the animal. One is to contact local humane societies to see if they’re able to help rehome the animal. Whatcom county in Washington, for example, has several humane societies like the Whatcom Humane Society and the Alternative Humane Society.

Another option is to do your research on the animal before getting it and make sure you’re ready for a long-term commitment. Adopting a bunny seems like a great idea each spring/Easter but I promise that taking care of these animals is a huge commitment that lasts well beyond the initial cuteness.

I love seeing wild rabbits while out and about because at least for me, they’re one of the many reminders that we share this earth with many kinds of wildlife and that even if we don’t realize, our actions have an enormous impact on animals. Plus, I know I’m not the only one who thinks that rabbits (especially the pygmy rabbit!) are cute as heck. These animals, like many others, face a litany of issues but have been able to survive with help from organizations like the Northwest Trek Wildlife Park and Oregon Zoo.