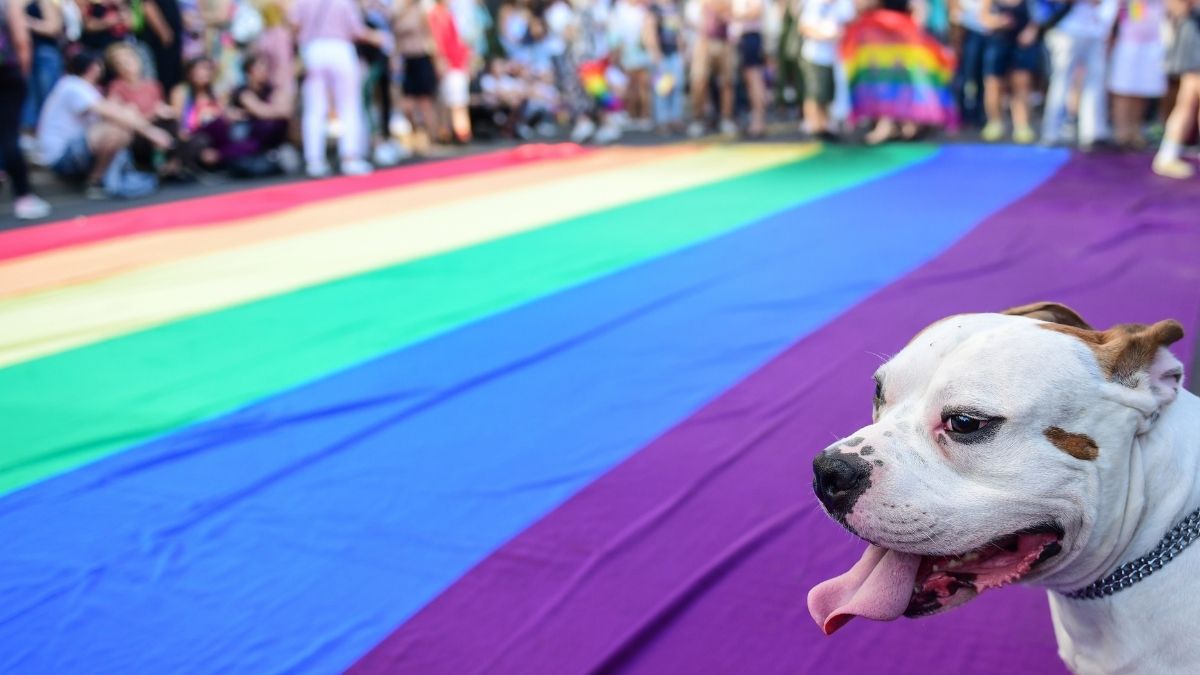 Commemorating the anniversary of the Stonewall Inn Riots that happened in June, 1969, Pride Month is a dedication to celebrating and fighting for the entire LGBTQ+ community. Here at Animals of the Pacific Northwest, we wholeheartedly support LGBTQ+ folks (and fully believe that Black Lives Matter). LGBTQ+ folks are an incredible part of the animal world, whether if it’s in dog training, teaching, or scientific research.

Pride Month can be a happy celebration and many have included their pets. The hilarious and wonderful Twitter account, WeRateDogs, has #PrideMonthPuppo for folks to share their dogs dressed in their finest rainbow gear. In addition to some incredibly well dressed dogs, there are LGBTQ+ folks that work in the pet care field, including as dog trainers. Sassafras Lowrey, for example, is a gay dog trainer, awarded winning author, and Certified Trick Dog Instructor. Back in June of 2019, she wrote about being a part of the dog world as a member of the LGBTQ community.

Scientific fields like wildlife conservation, zoology, marine biology, and evolutionary biology are all incredibly important and help further our understanding of the natural world. It can often feel unwelcoming for LGBTQ+ folks in the STEM field and workplaces but things seem to be changing. There are plenty of LGBTQ+ scientists (both now and throughout history) that have worked on various issues and there are even conferences for LGBTQ+ folks in STEM, like the LGBTQ+ STEM Conference.

In addition to being an openly gay woman, Dr. Ruth Gates was a renowned marine biologist that has spent her life trying to understand and save the world’s coral reefs. After receiving her PhD in Marine Sciences and Biology in 1990, Gates joined the faculty and research staff at the University of California, Los Angeles. She eventually joined the University of Hawai’i in 2003 and eventually became the director of the Hawai’i Institute of Marine Biology. According to family and colleagues, Dr. Gates was a passionate advocate for coral reef conservation.

As an ecologist and conservation biologist, Dr. Alex Bond’s scientific focus is on marine birds and oceanic islands. Over the years, he has published academic papers on topics like the impact of introduced insects on endemic finches at the Tristan da Cunha archipelago, the intentional killing or lethal handling of albatrosses and petrels at sea, and the detection of ultrafine plastics ingested by seabirds. Beyond his scientific and academic work, Dr. Bond lives in the UK with his husband Jeremy, works to encourage diversity in STEM fields (particularly with women and LGBTQ+ folks), and has spoken to high school, undergraduate, graduate, and faculty groups.

As a bisexual evolutionary biologist, Dr. Jessica Ware studied zoology at the University of British Columbia before receiving a PhD in Entomology from Rutgers University. She now works at the American Museum of Natural History as an Assistant Curator in invertebrate zoology and her research has focused on the evolution of behavioral and physiological adaptations in insects, particularly in dragonflies, damselflies, termites, cockroaches, and mantises.

LGBTQ folks are a vital and important part of society and have been for millennia. That includes STEM fields and conservation work, dog training, education, and so much more. Despite the hurdles and struggles, there are so many LGBTQ+ folks who have thrived in their professional and personal lives and I am personally grateful for that.

So to all those celebrating, happy Pride. 🌈💞

0 comments on “Happy Pride Month! Here Are Some Pride Month Puppers and LGBTQ+ Folks Working in Pet Care and STEM”