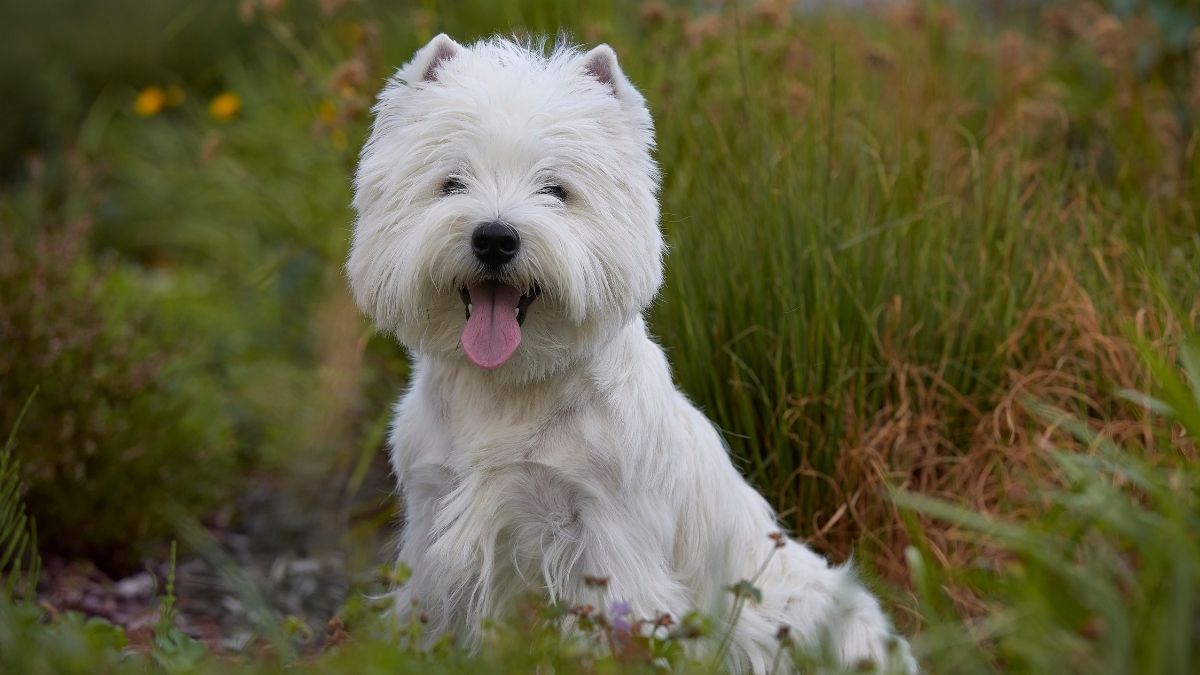 Also known as Westies, West Highland White Terriers are small but confident dogs with a lively and affectionate nature. These dogs are affectionate and energetic, making them great additions to families and active homes. With plenty of exercise and activity, Westies can adapt to any sort of living situation and they get along well with people, children, and other dogs. However, they can be emotionally sensitive and don’t do particularly well when left alone for long periods. And because of their compact stature, they’re also not meant to be strictly outdoor dogs.

As terriers, Westies were originally bred for hunting vermin, like rats, and other small mammals, as well as providing companionship to humans. These dogs hail from the British Isles and Colonel Malcolm of Poltalloch, Scotland is credited for officially establishing the breed in the 19th century. Lore suggests that Colonel Malcolm developed the iconic white coat that Westies are known for after a hunting accident that resulted in the death of one of his favorite dogs. That dog was a terrier but has a red coat and looked similar to a fox. After the fatal accident, Colonel Malcolm allegedly swore to breed white dogs so that the accident would never happen again. But there also seems to be some evidence suggesting that little white dogs that were similar in stature to Westies can be traced back to the early 17th century in the English Monarchy.

These sturdy little dogs have a slightly rectangular shape, stand 10-12 inches tall, and weigh 13-20 pounds. Their white double coat is easy to groom and rarely sheds but it still requires regularly brushing and trimming around their feet, ears, and eyes. Routine exercise, play, dog sports, puzzles, and other types of enrichment can keep this lively breed happy and engaged. Despite their small size, Westies can get destructive when bored and don’t actually like being lapdogs, which means that they’re often not couch potatoes and love having something to do. The care and personality of individual dogs will, of course, vary but if you’re looking for a small but active partner in crime, a Westie just might be the right breed for you.

While there are so many wonderful things about this breed, there are some terrier traits to look out for! These dogs will dig, bark, and go after vermin. Chasing rodents and other small mammals is, unfortunately, a trait that’s hard-wired into many kinds of terriers, which means they’re not great with other pets like rabbits or guinea pigs. On the other hand, the barking and digging can be mostly trained out of individual Westies. Training can really go a long way with this breed but Westies can be strong-willed and can have great self-esteem. That means positive reinforcement, consistency, and interesting training are all necessary. However, that stubborn, independent nature many Westies have means this breed isn’t particularly great for novice dog owners.

Health-wise, there are some conditions to look out for in a West Highland White Terrier. Westies can develop skin allergies or have sensitive stomachs, meaning what’s in their diet is very important. Your vet should have a better idea of what your dog will need as far as nutrition but feeding them high-quality food with added supplements like pumpkin or salmon oil can help with skin or stomach issues. Other issues include patellar luxation and other joint problems, deafness, and even something called ‘shaker syndrome‘.

Like any breed, Westies thrive in an environment that understands and caters to their needs. These dogs are small but mighty so don’t let their size fool you into thinking they’re just a lap dog. Westies do really well with regular exercise and often love activities like sports, walks, or puzzles. With their stubborn but lively personality, this breed can be a bit difficult to handle and train at times but positive reinforcement and consistency are key. If you’re looking for a fun companion in a small package, a West Highland White Terrier just might be for you!

0 comments on “Behind the Breed: West Highland White Terrier (Westies)”