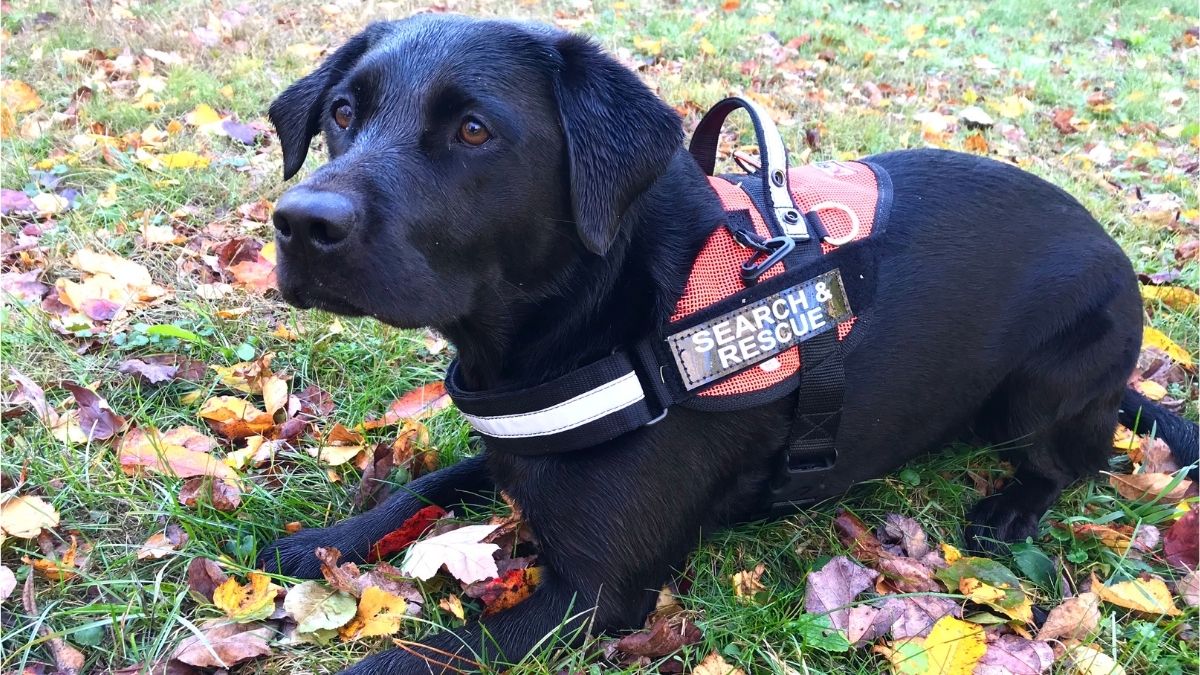 Dogs are incredible animals and with thousands of years of selective breeding behind them, dogs today often have traits and instincts that make them great in certain jobs. Over the centuries, dogs have spent a significant amount of time working in agricultural settings. Guardian breeds like Great Pyrenees and Bergamascos have helped to protect livestock like sheep while herding dogs have an instinctual ability to control the movement of other animals. But working on farms isn’t the only job that dogs have had! Among the many, many jobs that they’ve had over the centuries, dogs have worked as service animals, therapy animals, search and rescue, scent detection, and cadaver dogs.

Service or assistance dogs have been trained to help disabled people or folks with certain illnesses. Examples of this type of working dog are a guide dog for someone with a visual impairment, hearing dogs for deaf or hard of hearing people, and diabetes assistance dogs, who help detect their owner’s blood sugar highs and lows by scent. Additionally, seizure alert dogs can sense a seizure coming on before it happens and alert their handlers. In addition to their job, research has shown that these dogs help their handlers in many different ways, including having measurably positive effects on the health and wellbeing of people with disabilities.

It should be noted that not every dog is suited to be a service dog and while there are highly trained psychiatric service dogs, therapy/emotional support dogs aren’t considered service dogs under the law. There American Disabilities Act defines service dogs “as dogs that are individually trained to do work or perform tasks for people with disabilities. … Service animals are working animals, not pets. The work or task a dog has been trained to provide must be directly related to the person’s disability.” There is a lot of training and work that goes into a dog becoming a service animal.

Another job dogs have is search and rescue, a field in which dogs assist in a variety of emergencies and settings. Search and rescue dogs have been used during mass casualty events, natural disasters (like Frida during the 2017 earthquake in Mexico), avalanches, and finding missing people. Because of their strong sense of smell, dogs as a species are particularly suited for this field but its one that still requires a certain type of mindset and training.

Dogs have an incredible sense of smell, something they use in a range of jobs. While macabre, some dogs are even trained to use their noses to find the remains of people who were murdered or went missing. This work may seem similar to search and rescue but cadaver dogs have their own specialized training and are used to find decomposing flesh rather than the general scent of humans. And unlike search and rescue dogs, who are often trained to bark and claw at the ground when they sense someone in need, cadaver dogs are trained to sit or lie down quietly if they detect human remains.

It’s suggested that dogs have been used to find burial sites for thousands of years but nowadays, each cadaver dog actually receives roughly 1,000 hours of training before going into the field. These dogs need to be able to identify hundreds of different scents and how to follow the most important. In fact, cadaver dogs are trained to ignore decomposing animals and to focus solely on human remains. Recent research also shows how cadaver dogs can help archaeologists uncover buried remains from centuries ago.

Wildlife and urban development don’t always get along and airport runways are just one place where this is particularly evident. The infamous landing of US Airways Flight 1549 on the Hudson River is just one example of how the collision of airplanes and birds can be dangerous to humans and wildlife alike. But the good news is that at least on some runways, there are canine wildlife control officers that help keep the area clear of wildlife for the planes to safely take off. Piper the border collie might be the most famous dog to work on an airplane runway but he’s not the only one. The Vancouver International Airport, for example, has a wildlife management team that has used canines in their work! (They also have trained raptors on their team but that’s a story for another time.)

Of course, it goes without saying that dogs have been vital in agricultural work for centuries. From guarding against predators to helping move animals from one area to another, dogs of all kinds have long been a vital part of many farms and ranches all over the world. For many farm dogs, these jobs are a source of joy and they’re motivated not by the desire to please their owners but their love for the job. And because of artificial selection (selective breeding done by humans), many breeds have been developed specifically to heighten certain instincts.

Border collies and Great Pyrenees dogs might be two of the most iconic farm dogs and both have been used for very different jobs. Border collies are intelligent, athletic dogs that often naturally take to herding behaviors and even have the intense gaze needed to intimidate some livestock. Great Pyrenees dogs, on the other hand, are large, independent dogs with a protective and territorial nature. These fluffy white dogs easily blend in with sheep but they’ve been known to protect a variety of farm animals. Their thick double coats help keep them warm on cold nights, meaning they’re able to spend all night outside guarding livestock, and their deep, commanding barks are often enough to keep predators at bay.

Herding and guarding aren’t the only jobs that dogs have had on farms! Some dogs, particularly terriers, have been used as a safe, eco-friendly type of pest control by farmers to help keep fields and orchards of fruit, vegetables, and grains safe from rodents or other pests. Ratters, as these pest control dogs have been called, are definitely some of the smallest dogs working on farms. Breeds like Yorkshire Terriers, Dachshunds, and Jack Russel Terriers have all been used to either kill or chase off rats and other rodents. While this type of work isn’t as well known (or considered fun by humans…), ratting is still so important on farms because rodents and other pests have been known to spread disease, damage structures, and eat crops.

There are, of course, so many other jobs that dogs have had over the centuries and once you look at all that dogs have helped us with, it’s particularly evident why the species is called “man’s best friend”. After centuries of artificial breeding, some breeds are, naturally, better for certain jobs; a Border Collie could do really well herding, a German Shepherd could thrive as a cadaver dog, and a Golden Retriever could really help someone as their service dog.

A dog’s breed isn’t always a clear indication that an individual dog will be good at a certain job; it just means they’re likely to have some instinctual behaviors that help them in that job. But a dog’s temperament, personality, history, and specific genetics all come into play when it comes to whether they’d be good at a job. Labrador retrievers, for example, are very popular dogs in service animal training facilities because of their intelligence, trainability, and general demeanor. While the breed’s general characteristics often make these dogs good candidates for guide dogs, there are plenty of individual labradors that have been “career changed” for one reason or another but still end up having a great life in another job (often as a companion!).

Ultimately, many dogs throughout history have used certain skills and senses to work in a variety of different fields. While they definitely don’t understand the concept of money and getting paid for their work, most dogs seem to feel a certain level of love for their jobs and seem to appreciate getting paid in belly rubs and treats. If you treat your working dogs well, there’s a very good chance those dogs will repay you with a lot of hard work!

0 comments on “Working Dogs: What Jobs Do Dogs Have?”