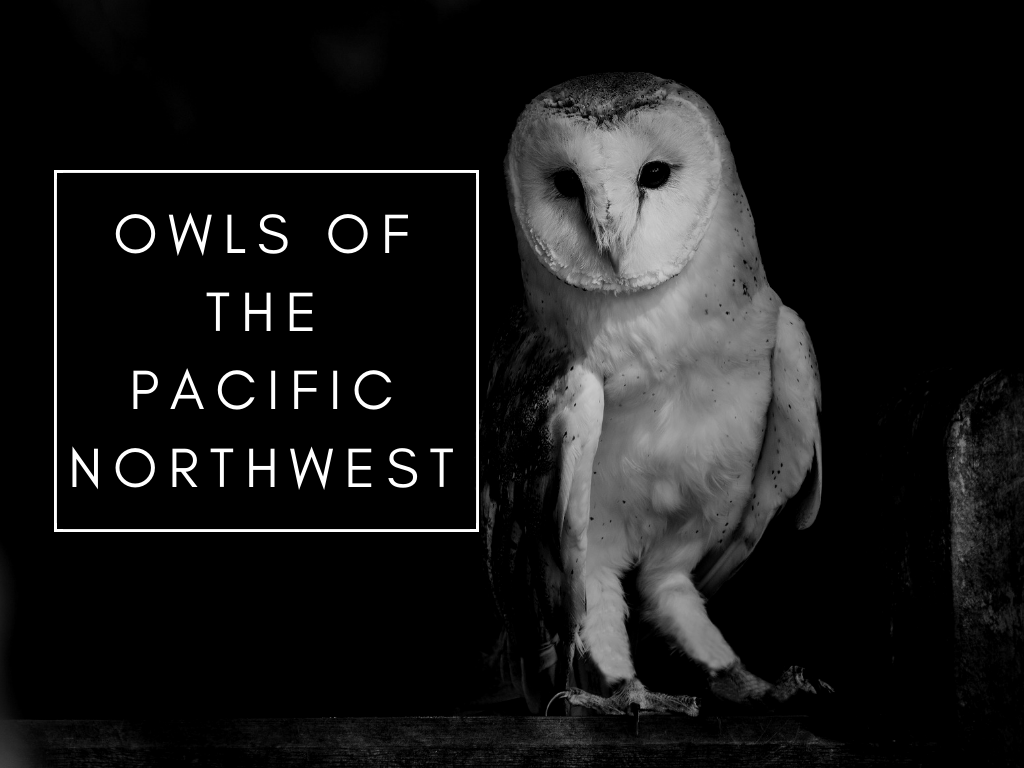 All the birds that call the Pacific Northwest home make this region even more amazing. I’ve seen bald eagles roost on trees near the Salish Sea while seagulls and crows fly by. Turkey vultures have flown overhead while stellar jays have sat in apple trees. And some of the amazing birds that also call this place home are many kinds of owls!

Of the 19 species of owls in North America, 15 can be found in the northwest at different points in time during the year! Many owls are nocturnal (although there are a few exceptions) and hunt at night. They’re some of the most skilled night hunters, as their wings are set up to beat in silence, their eyes are large to let in more light at night, and their dark coloration helps them blend in with their surroundings. While it’s relatively rare to actually see different owls on a regular basis, I’ve had a few fly over my head at different times and they’re so quiet!

Here are some of the owls that call the Pacific Northwest home:

This large, dark brown owl has these distinctive ‘ear-tufts’. It often finds a home in places like parks, open woodlands, and agricultural areas, as its diet consists of other animals like mice, rats, rabbits, hawks, and snakes! Newborn Great Horned Owls will often start flying when they’re about 9-10 weeks old and both parents will actually take part in caring for young owls.

These owls are speckled birds that are only slightly smaller than the Great Horned Owls. Their markings, in my opinion, make them look similar to tree bark! This makes it easier for the owls to blend in, as they prefer dense and thick woods and swampy areas. In the Northwest, they can be found in woods with mature coniferous trees.

Their diet consists mostly of small mammals like mice, small rodents, squirrels, rabbits, and opossums. They’ve also been known to eat animals like frogs, salamanders, and even aquatic animals like crayfish and fish!

These beautiful owls have a rather ghostly appearance to them, as they’re often white or light colored with a rather interesting shaped face. Their appearance combined with their raspy shrieks and a habit of roosting in places like church belfries means that barn owls have attracted their fair share of superstition! They’re also one of the most widespread land bird and found on six continents and multiple islands.

Barn owls often eat rodents (like voles, mice, and small rats), other mammals, and the occasional bird, lizard, and fish! They will almost exclusively hunt at night and their hearing is so good that they can strike prey in complete darkness!

These owls are medium in size and are aptly named after their long ears! And because of these ears, they often seem to have a somewhat surprised look on their face. Like other owls, long-eared owls will often feed on small mammals like common rodents and have been known to swallow their prey whole! The indigestible parts, like tiny bones and fur, are then regurgitated in pellets.

Many other owls also occasionally call this region home and there are so many interesting things to know about these birds! Owls of all kinds face all sorts of issues that affect their populations. They can be hurt or killed by flying into buildings (especially those that have a lot of glass) or being hit by vehicles. But a significant threat to these birds has been rodenticide, as the poison that’s meant for rats can be indirectly ingested by owls (when they eat a poisoned rat) and can, in turn, also kill the owl. If possible, consider not using rodenticide to deal with unwanted pests!

It can often be difficult to see different owls but there are ways to spot them if you know what you’re looking for! Plus, you can learn to identify different owls based on their calls. The National Audubon Society, for example, has a guide for five different owl calls.

Have you seen an owl out in the wild? Or do you have a favorite owl? Let me know in the comments!

2 comments on “Owls in the Pacific Northwest.”