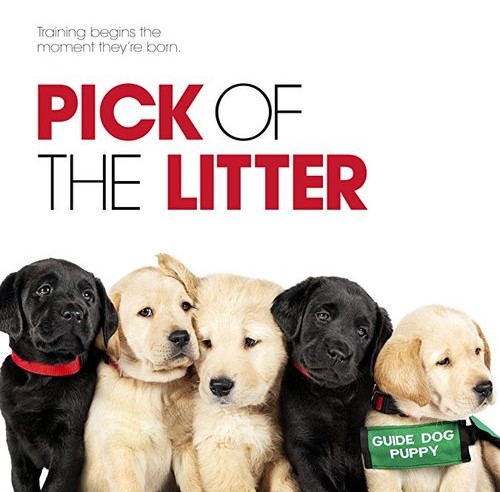 Pick Of The Litter is a recently released documentary that follows five puppies born at Guide Dogs For The Blind (GDB) as they train to become guide dogs for blind and visually impaired people. The litter of Labradors is cuter than can be but the work they might do as a service dog can provide an exceptional difference in someone’s life. However, the work is intense and out of the 800 or so born at GDB each year, only 300 eventually become guide dogs.

Potomac, Poppet, Patriot, Primrose, and Phil are the five labs (three black and two golden, lovingly referred to as the P-litter) at the center of the film and after being born, they are sent to live with volunteer puppy raisers until they’re 15-17 months old. During this time, the volunteers work with the puppies on simple manners (like walking next to a person on a loose leash) and socialization, two fundamental things for dogs but especially for guide dogs!

After that, the dogs return to GDB’s campus for a more rigorous 10-week training period, including learning ‘intelligent disobedience’ (learning to ignore a command if it might lead its owner to danger). The dogs learn to heel, lead their owners around all sorts of environments (like sidewalks, roads, and businesses), and learn how to interact with ever-changing situations like traffic and large crowds without getting distracted or running into something. This part is intense but essential because guide dogs are vital in helping their owners interact safely with the world. Things like consistently being distracted while out or being too rambunctious can be deal breakers for dogs in the program.

For those who might not make it through the training phase (or even to this phase), they are ‘career changed’, a polite way of saying they either become someone’s pet, a different kind of service/therapy dog, or become a breeder at GDB. Throughout the film, you’re rooting for the puppies as they grow and train to become guide dogs but not all make it through. Even so, all the dogs end up with a happing ending and a loving home.

In addition to the dogs, the film shows the humans behind raising and training the dogs, as well as two blind/visually impaired people who end up with two of the p-litter dogs at the end! You really get to know just how intense the entire process is and a greater appreciation for the work that the work these dogs and their trainers/raisers do. The film interweaves testaments to how important these dogs are to their owners and even starts with interviews of people who share how their dogs saved their lives in dangerous situations.

Pick Of The Litter is a sweet, informative, and well-made film about an issue that many may not think about on a regular basis. Throughout the film, you’re reminded that service and therapy dogs, especially guide dogs, provide an invaluable service to people (and indirectly serves as a reminder as to why you shouldn’t pet or distract service dogs while they’re working). The film also shows both the importance of these dogs and how much work that goes into training them, leaving you with a deep respect for working dogs of all kinds.

0 comments on “Pick Of The Litter [review]”