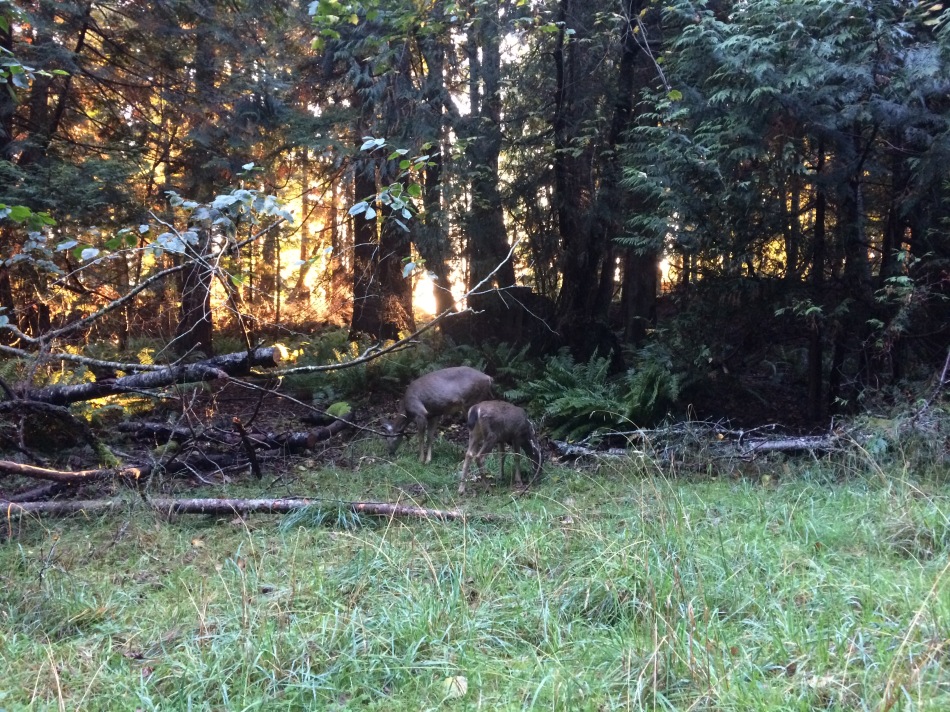 One of the reasons I wanted to start this project was to learn about the wildlife of the Pacific Northwest. We share this region with a plethora of wild animals, animals that rely on the same ecosystem we do and are significantly affected by human action and intervention. And there are so many animals that also live here, whether we realize it or not!

There are plenty of animals that you can see fairly easy, depending on where you live. There are robins, seagulls, squirrels, deer, raccoons, salmon, and stellar jays. But there are also blue herons, orcas, coyotes, cougars, otters, and so much more. If you keep your eyes open and always curious, there are so many animals all around us!

Here are just some of the amazing wild animals that call the Northwest home:

Roughly the size of a bus, these whales are some of the world’s greatest migrators and some make the 12,500 mile round trip from Alaska to Mexico. Gray whales are roughly 40-50 feet in length, weigh around 30-40 tons, and live in pods. Because they’re covered in parasites and other organisms, they often look like a crusty ocean rock.

Last spring (around March of 2018), gray whale sightings were actually up along the coasts of the northwest! This was in part because of the beautiful weather we had last spring (which resulted in more people out and about and noticing the whales) but according to the American Cetacean Society, there seems to be a population growth in some gray whale pods over the last couple years!

One great place to learn more about the gray whales that pass by the northwest and to potentially see some would be the Whale Watching Center in Depoe Bay, Oregon. It’s open Wednesday to Sunday from 10am to 4pm.

In addition to sea otters, the Northwest also has river otters! While they might look strikingly similar, these otters are different from their seagoing cousins. River otters can be found in fresh, brackish (mix of fresh and salt), and/or salt water while sea otters are almost always found in salt water. Plus, sea otters will spend most of their lives in the sea and generally come to land for the occasional rest or to give birth. River otters, on the other hand, have been known to travel on land for considerable distances.

River otters are also much smaller than sea otters, weighing around 30 pounds compared to a sea otter’s weight of 50-100 pounds. River otters are less social than sea otters, with family groups generally consisting of a mother and her pups while adult males are solitary. Some family groups might include an adult male and female with a litter of pups or even a group of bachelor males. Female river otters can also experience delayed implantation, which means that the fertilized egg doesn’t immediately attach to the uterine wall for some time. Because of that, a river otter’s gestation can range from 285 to 375 days!

Named after Theodore Roosevelt, these elk are the largest of the North American elk subspecies and primarily live in the forests of the Pacific Northwest. Roosevelt elk often migrate seasonally, usually moving from the mountains in the summer to lower elevations in the winter to avoid storms. However, there are a few herds in the Hoh Rain Forest on the Olympic Peninsula that generally stay in the forest year round. The Olympic National Park is also home to the largest unmanaged herd in the Pacific Northwest. There are almost 5,000 elk in that herd!

Roosevelt elk are large in size, often weighing 700-875 pounds but bulls in Alaska have been known to weigh almost 1,300 pounds! Their antlers are also large, beautiful, and serve a variety of purposes. Males will grow their antlers in the spring and will often use them to fight with other males during the fall over the right to mate with female elk.

These cute black, white, and orange birds were once considered to be prevalent birds in the northwest, with around 44 nesting colonies documented in the state of Washington at one point. Over the last few decades, their populations have been declining and now, these birds are considered endangered. Currently, there are an estimated 2,958 tufted puffins in Washington state, compared to the ~25,000 birds that lived in the area in the early 20th century.

Tufted puffins are a unique bird and look like a cross between a parrot and a penguin. Their bright orange beaks, white face, and black body make them quite indistinguishable!

While these birds are endangered and their populations are low, it is possible to see them in the wild if you’re lucky! Like with any wild animal (and especially those who are endangered), it’s important to give these birds and their habitats some space. These birds are seabirds and have been known to spend long stretches of time out on the ocean. However, tufted puffins do come back to the Pacific Northwest coast (and other areas) during the spring and summer to breed and raise their young.

One great place to see tufted puffins is Oregon’s Cannon Beach during the summer (especially in early July). But if you’re not able to see the puffins in the wild, there are a few places around the northwest that care for a couple puffins!

This animals, of course, are just some of the many animals that also call the Northwest home and numerous others coexist with humans and animals alike. I’ll continue to write about all kinds of wildlife that call this place home and I hope you’ll join along.