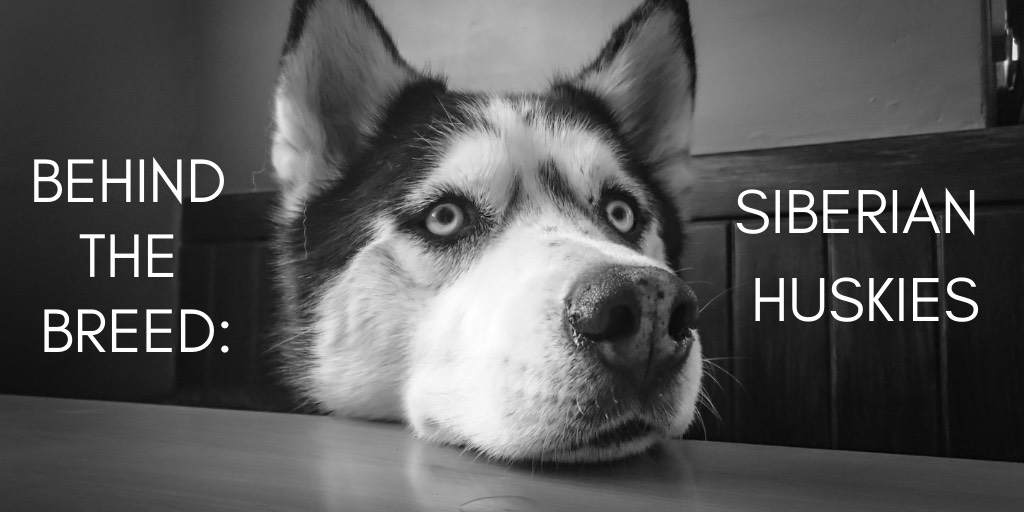 Siberian Huskies are friendly, medium-sized dogs with a thick coat and an ability to help pull light loads over a long frozen expanse in freezing temperatures. These dogs are pack dogs, which means that their friendly demeanor and love for family life and other dogs makes them rather indifferent watchdogs. They’re also loyal, outgoing, mischevious, and rather stubborn!

Ancestors of today’s Siberian Huskies were bred by the Chukchi people in northeastern Asia and were called Chukchi Huskies! The semi-nomadic Chukchi people kept dogs as companions for their families and as endurance sled dogs. The changing climate eventually forced the Chukchi people to expand the land they covered, which meant that their dogs became capable of hauling small sleds over large, frozen distances in sub-zero temperatures. These dogs played a huge role in everyday life and survival for the Chukchi people for thousands of years.

By the end of the 19th century, Alaskan traders discovered Chukchi Huskies, imported into the Northwest Terriority, and renamed them Siberian Huskies. A team of these dogs driven by a man named John ‘Iron Man’ Johnson actually won the 400-mile All Alaska Sweepstakes Race in 1910 and many Siberian Huskies were on numerous winning teams for a decade after that!

Plus, a dog team made up of Siberian Huskies helped deliver life-saving medication to Nome, Alaska in 1925 after a diphtheria epidemic. The 1995 animated film Balto is actually based on that story!

Siberian Huskies are usually 35-60 pounds with large snowshoe paws. Their light frames, double coats, and hairy paws allow for these dogs to be great sled dogs in cold areas. Often, these Huskies will have blue or brown eyes but many have had one blue and one brown eye! Common colorings include: black and white; red and white; brown, gray, and white;  silver, wolf-gray, sable and white; red-orange with black tips; dark gray and white. Many are piebald, meaning that they have irregular patches of two colors.

They do have a double coat that heavily sheds twice a year. During that time, they’ll need to be brushed daily to help keep their coats healthy. During the rest of the year, weekly brushings and occasional baths are the most care their coats will need.

As mentioned, Siberian Huskies are incredibly friendly and because they were bred to be sled dogs, they’re also incredibly energetic and will need plenty of exercise and training in addition to a fully fenced yard. A fully fenced yard with part of the fence also buried at the base is important because they will try to dig their way out to go exploring! A daily walk or jog will help keep a Husky happy and healthy, as long as it’s not too warm/hot outside.

Huskies are very social and trainable but also very intelligent, mischievous, and stubborn. This means they’ll often only obey a command if the human is a strong-minded and firm leader and you’ll have to be a completely confident and consistent leader if you don’t want your Husky to take advantage. Plus, without enough mental and physical exercise/enrichment or social interaction, Huskies could get destructive.

Siberian Huskies are beautiful, intelligent, and social dogs who love being around people and other dogs. They may not be the best for apartment living but it could potentially work if they have consistent exercise and training.

0 comments on “Behind the Breed: Siberian Husky”