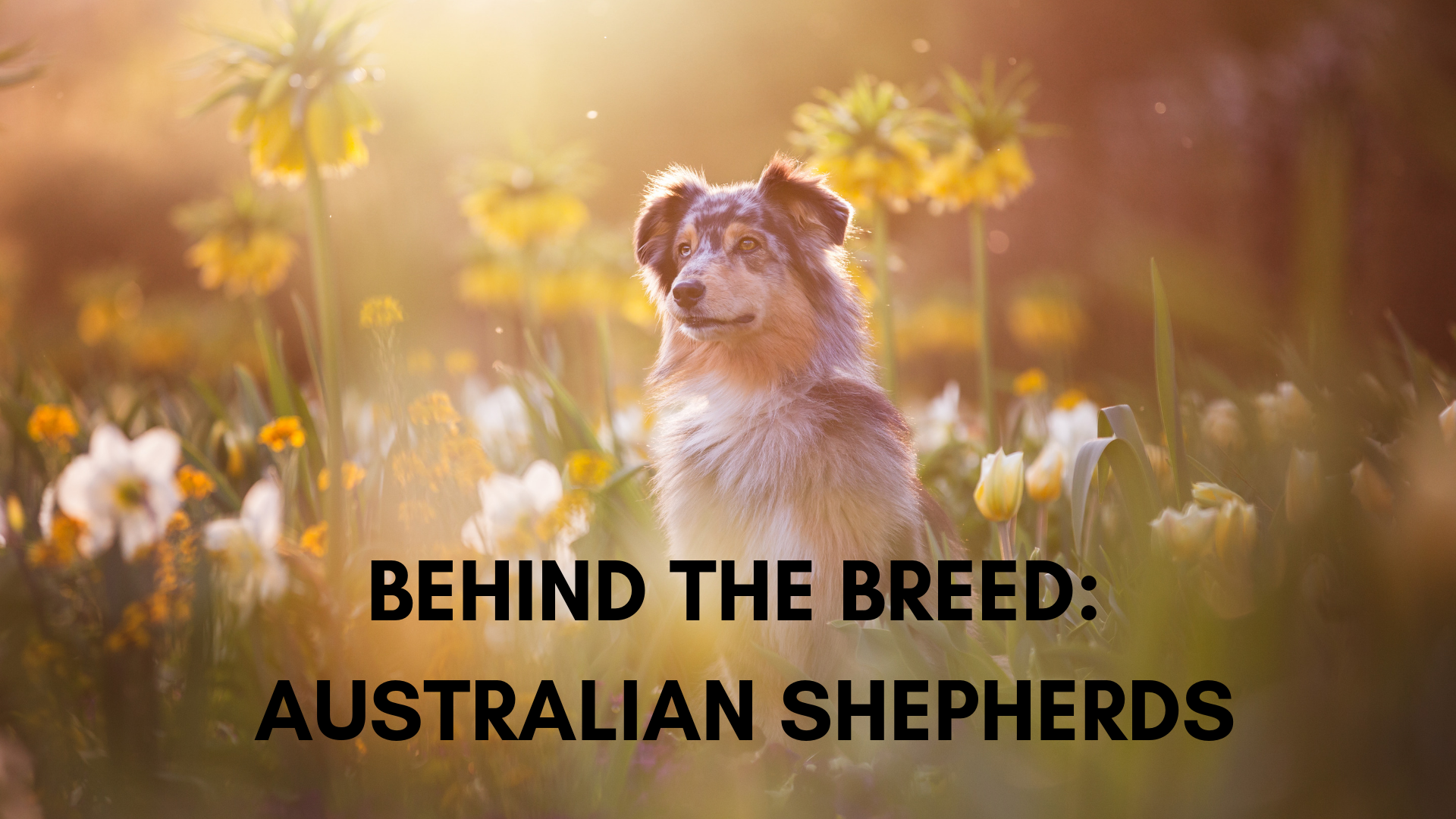 Not only are Australian Shepherds incredibly adorable, they’re also known to be smart, exuberant, and work-oriented! These dogs are medium in size and are usually 40-65 pounds. Aussie coats come in different colors and patterns; one Aussie pattern is merle, a spotted/smeared pattern with shades of blue or red. These dogs were bred to be working dogs on ranches and farms, which means that they have a strong work drive and intense herding instinct.

This dog breed has ancestors in Europe’s finest herders, where their lineage begins near the Pyrenees Mountains. Indigenous people called the Basques had a herding dog called the Pyrenean Shepherd, a long distant ancestor of today’s Aussies! The Basque people have roots in southern France and northern Spain but a few made their way over to Australia in the 1800s with some Pyrenean Shepherds. These dogs were bred with Collies and Border Collies in Australia before many Basque people left Australia for California. It was in California that Australian Shepherds eventually became their own breed!

While in California, Australian Shepherds caught the attention of ranchers, who assumed the breed was strictly Australian in origin (which is why they’re called Australian Shepherds) and started using the breed to help with herding. Eventually, Aussies became an iconic part of rodeos and cowboy culture! Nowadays, there are many Aussies all over that work as herders, in rodeos, as therapy or service animals, drug detectors, or search and rescue.

Not every dog in this breed is a working dog, as there are many Aussies who are just loyal and happy companions and a wonderful part of families. However, it’s important to note that these dogs are intelligent, active, and able to learn complicated tricks, which is a big reason why they have been featured in rodeos. This also means that an Australian Shepherd wouldn’t be a great fit for someone looking for a couch potato dog. Instead, these dogs would be great in an active home with people willing to work on training and enrichment!

If you love running, hiking, or being outdoors, an Aussie would be a great breed for you. The combination of intelligence and high energy means that these dogs will want to do a lot with you and won’t be great at entertaining themselves. Similarly, some have been known to trick unsuspecting and novice owners! Consistently working on training and exercising regularly will mean that your Australian Shepherd stays happy and healthy.

As far as other care, Australian Shepherds will need nail trimming, brushing, and dental care like any other breed. They don’t shed excessively and occasional brushing should help keep their coats healthy. There are some common health issues like hip dysplasia and cataracts. Some Aussies might also be more sensitive to some medications but talking with a vet can help figure out the best course of action with anything medical.

Australian Shepherds are often great dogs with a strong work ethic and loyalty to their people. This breed would be great for any active person or family looking for a dog to join in on activities like hiking and running! Enrichment and training will help keep these dogs engaged, happy, and healthy.

0 comments on “Behind The Breed: Australian Shepherds”