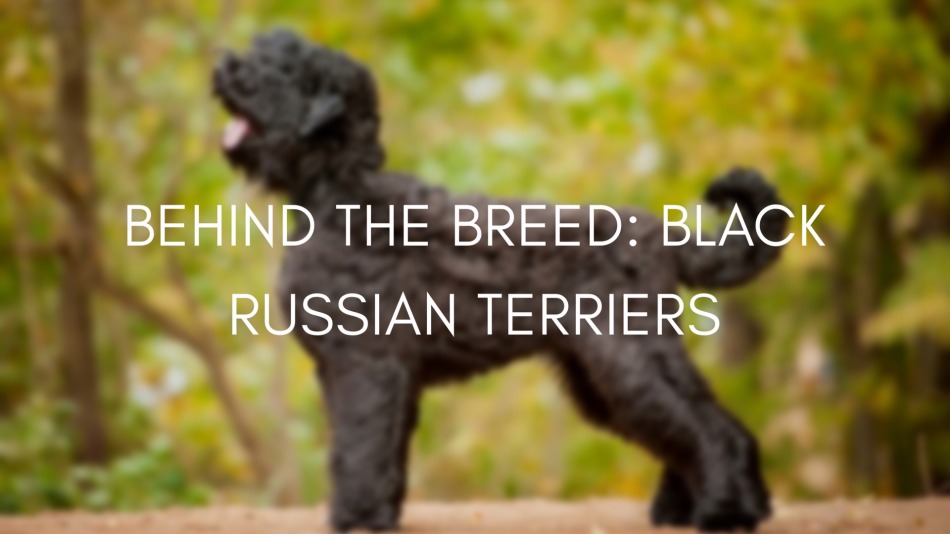 Black Russian Terriers are, despite having the name of terrier, large and powerful dogs! They have long, coarse all-black coats that don’t shed that much but need weekly brushing. This breed is relatively new and still fairly rare but given the right training and attention, they’re a fantastic family dog and quite loyal to their families/people.

These dogs are a part of the working dog breed group and will usually be 2ft-2.5ft tall at the shoulder. They’ll also often weigh 80-140 pounds, making them a large dog and similar (to an extent) in size to breeds like Bernese Mountain and Great Pyrenees. Their long, black coats are double coats and tousled, meaning their coats look wiry or curly. Because of that, Black Russian Terriers will need weekly/regular brushing to keep their coats healthy and to prevent matting.

This breed is a working dog and was bred in the Cold War era by Soviet Army scientists to be the perfect working dog. The Black Russian Terrier’s ancestors include Giant Schnauzers, Airedales, and Rottweilers but there are traces of 17 other breeds! Up until the 1950s, this breed worked at rail crossings, prisons, and assorted military venues. And the breed eventually made its way over the United States around 1989/1990. Nowadays, most Black Russian Terriers in the US “guard” family homes and are loyal companions.

Despite the breed’s large size and working abilities, these dogs would make great additions to a family and great companions. They’re often calm, confident/self-assured, and loyal, making them great around children if trained well. Additionally, these dogs are also incredibly smart and take well to firm direction. However, training, attention, and dedication to this dog will be a necessity, as their intelligence and breeding history means they need to feel like a part of the family. Not enough attention and socialization could lead one of these dogs to be withdrawn or even dangerous.

That sounds scary but given the right training, socialization, and attention, a Black Russian Terrier should be a happy and wonderful part of your family! It will be important to remember that these dogs are large and active, meaning that even the nicest one might unintentionally and accidentally knock over very young and small children. And because of their history, they can also be good guard dogs, as they’re naturally a little suspicious of strangers.

If you’re looking for a great companion dog to keep you company and be active, a Black Russian Terrier would be great! As long as you’re okay with a large dog that loves to spend time with you, these dogs are loyal, easy to train, and playful.

0 comments on “Behind the Breed: Black Russian Terriers”