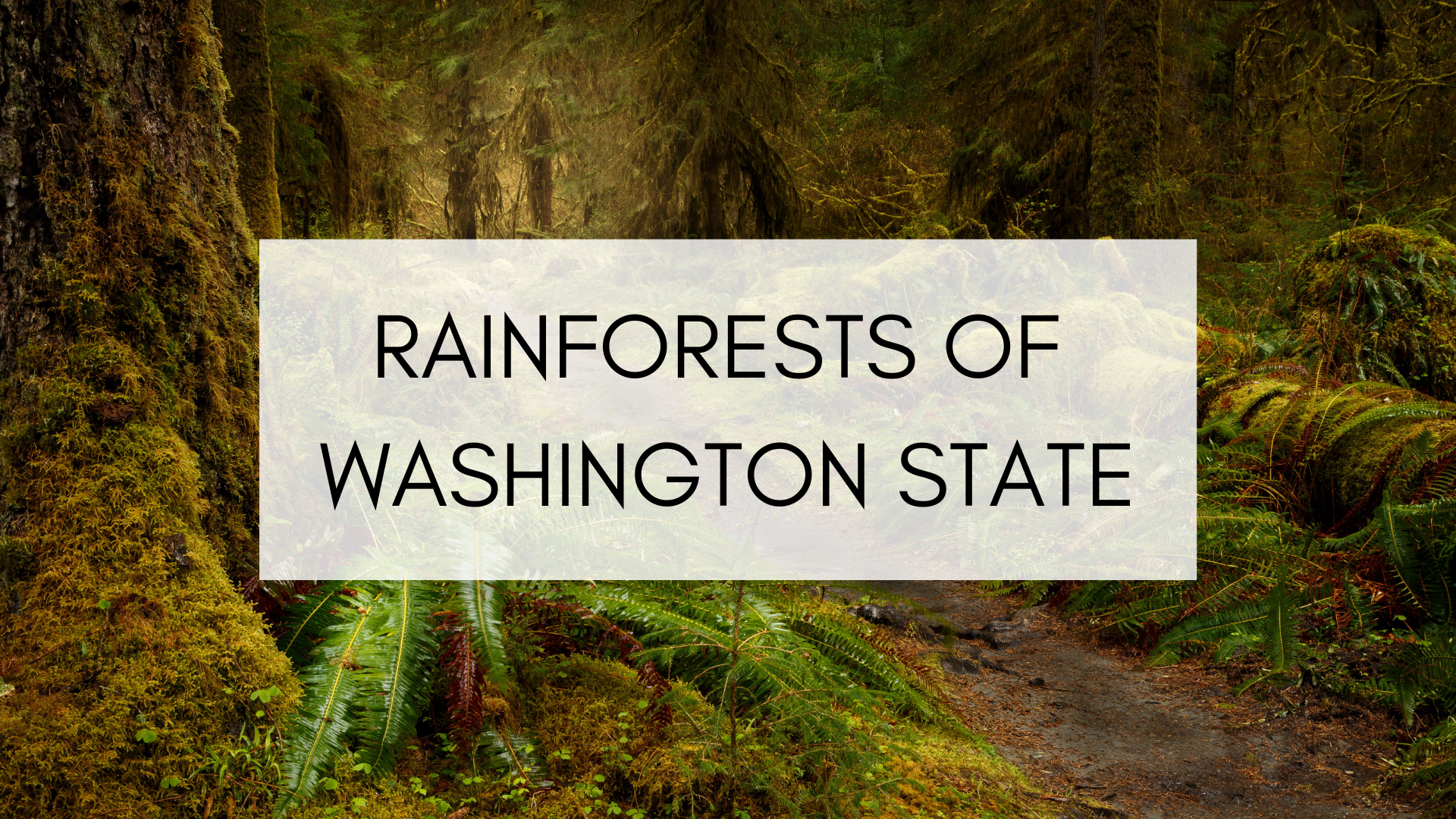 If you’d like to learn more about these forests and the many others, The Weather Channel actually has an informative article about them!

Rainforests exist all over the world, including here in Washington state. The Hoh Rainforest on the Olympic Peninsula is just one of four rainforests in the area but is the only one to be a UNESCO World Heritage Site and Biosphere Reserve.

The other rainforests in the area are the Quinault, Queets, and Bogchiel. These rainforests are distinct and magical in their own ways. As temperate rainforests, they get 12-18 feet of rain each year and temperatures rarely drop below freezing or go above 80F. This climate allows for a unique ecosystem to grow, with all sorts of plants and animals calling these forests home.

Many rainforests in the world are self-watering, in addition to receiving immense amounts of rain, as plants often release water into the forest atmosphere through transpiration. For many tropical rainforests, a single canopy tree can release 200 gallons of water annually. That moisture helps to create a thick cloud that hangs over the forests and keeps them humid and warm.

There is no shortage of tall evergreen trees in the Olympic rainforests. Douglas firs, red alders, Western hemlocks, and Sitka spruces are just a few of these trees and there are some in the area that are around 1,000 years old. The National Park Service actually has a record of some of the tallest trees in the Olympic National Park and how to identify the different kinds you’ll encounter.

While no longer living, nurse logs (fallen trees) and other forms of dead wood help other plants and a few animals. Tree seedlings will often grow on nurse logs as they decay and dead wood provides a habitat for moss, fungi, insects, amphibians, and small mammals.

There are a few shrubs that also grow within the Olympic rainforests. Salmonberry and huckleberry are the two most common.

These mollusks aren’t your typical garden slugs, as banana slugs stay mostly in forests and prefer wet, cool forests. They do require a moist or wet habitat, as they’re very sensitive to desiccation (the removal of moisture from something). There are a few main species and subspecies of banana slugs but generally speaking, these slugs are the second largest in the world. They can grow to be six to ten inches in length and can live to be seven years old.

Threatened by habitat loss, forest fragmentation, and an increase of barrel owls, Northern Spotted Owls aren’t very common in Olympic National Park these days. In fact, there appears to only be around 500 pairs of these owls found in the entire state of Washington.

These owls are often found in old-growth forests in northern California and the Pacific Northwest and each pair needs a large amount of land for hunting and nesting. These owls are very territorial and do not deal well with any interference with their habitats.  So any disturbance, like logging, can cause issues for them.

The Olympic National Park is actually home to the largest unmanaged herd of Roosevelt elk in the Pacific Northwest. The best place to potentially see these animals is the Hoh Rainforest, as there are a few non-migratory herds of 20 or so elk that stay in the forest year round. Named after President Theodore Roosevelt, these elk are the largest variety in North America and feed mainly on ferns, shrubs, and lichens. Because of their diet, they often shape the appearance of the forest, especially the understory.

If you do want to visit any one of these rainforests, there are so many amazing hiking trails to explore. The National Park Service has resources on planning your trip to Olympic National Park (including to forests like the Hoh Rainforest), including things to do and places to stay. Finding a place to stay will be important, depending on where you’re coming from. The Hoh Rainforest, for example, is a 4-5 hour one-way drive from both Seattle and Portland.

Like with any adventure into the great outdoors, it’s important to respect the environment you’re visiting. Pick up and carry out any litter (including dog poop!); stay on trails; avoid taking any ‘souvenirs’ like shells, animals, or plants. Take only photos and leave only footprints. Respecting the wilderness may make things a little more boring but doing so allows for these forests and the plants/animals that call them home to survive and thrive.

Some trails and parks will only be open during part of the year or hours might vary depending on the season. Before going, check to see if you’ll be able to visit. The Washington Trails Association and official National Parks Service website are both great places to check. It’s also important to note that many of these rainforests require your car having a Discover Pass. It’s $10 a day or $30 a year. If you live in Washington or planning to go to several parks over a few days, the yearly pass is definitely worth it! There are a few ‘free days’ for state parks; you can find a list of those dates on the Discover Pass Washington website.

Here are some great resources on exploring the Hoh Rainforest:

Have you been to any of these forests before? What did you think? Let me know in the comments!

0 comments on “Rainforests of Washington.”