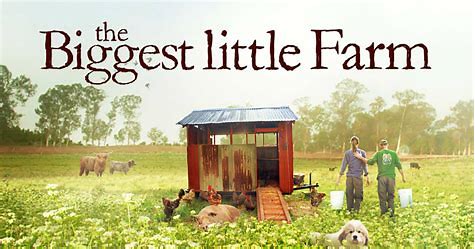 Two disclosures before the review: one, this post contains affiliate links that I may gain a commission off of. All opinions are my own. Two, this film does deal with the ups and downs of traditional farming, including the death of many animals.

In 2010, John and Molly Chester made the bold decision to move out of their Santa Monica apartment and to a 200-acre farm an hour outside Los Angeles. This decision was motivated in part by the eviction notice they got because their rescue dog, Todd, would not stop barking when left alone and they were determined to keep their promise that he was with them until the end. But the larger reason was to bring back traditional farming and work in harmony with nature.

Released in May 2019, ‘The Biggest Little Farm’ is a documentary chronicling their eight-year journey of turning a barren, abandoned farm into a successful agriculture venture that worked with the ecosystem around them. In just an hour and a half, the film shares some of the farm’s hardest moments and some of its most successful ventures. The film is truly the definition of ‘bittersweet’, as its honesty on the many ups and downs shares the emotional and physical investment the Chesters put into the project.

There is no sugarcoating in the film, as John and Molly share the many challenges they had to face over the years. The soil on Apricot Lane Farms when they first arrived was truly barren and disastrous. Between years of monocrops and recent abandonment, almost nothing was really growing on the land and the soil was tough. Even the beehive had collapsed and many bees had died.

Determined to go back to more traditional farming that worked with the land and ecosystem, the Chesters worked with Alan Young to build biomimicry methods and biodiversity. They managed to rebuild the soil on the farm through regenerative soil methods that cycle nutrients in many ways. Cover crops throughout the farms act as a sponge during rainstorms and provide nutrients. Some of the livestock, like the ducks and chickens, help with pest control and their poop provides microorganisms for the soil. Additionally, other livestock, like sheep and cows, help keep cover crops under control and like the ducks and chickens, their manure provides vital nutrients and microorganisms for the soil.

With Young’s advice, the Chesters used a portion of the farm’s land to build an orchard with 75 different stone fruit varieties and use the animals to help maintain balance throughout the property. While John and Molly believed in Young’s vision of more traditional farming and biodiversity, things weren’t quite as simple as planting a variety of plants and trees.

The film does not shy away from the challenges that the farm faced the first few years and the creative solutions they had to come up with. Snails were eating the leaves off the trees in the orchards, making it difficult for the trees to grow their fruit. The upkeep of constantly removing the snails wasn’t sustainable but eventually, John realized the solution was just to move their ducks from the pond to the orchard, where they would gladly eat up any snail they found. They also encouraged owls and other birds of prey to call the farm home, which helped keep the starling and gopher populations under a manageable level. Even the gophers were mostly welcomed, as they helped aerate the soil.

Coyotes proved to be a consistent problem for the farm, as they kept killing the chickens and ducks. While some were killed, the eventual solution was having Great Pyrenees guard dogs stay with the different livestock, as the dogs would often chase off the coyotes. The coyotes would then, hopefully, turn to other food and help keep the gopher and rodent population at a manageable level.

At every challenge, there seemed to be a creative solution that worked in favor of the farm and its dedication to biomimicry and biodiversity. As the film progresses, it’s difficult to not get more and more invested in the Chesters’ vision for the farm and inspired by their dedicated and optimism. Ultimately, the film is a sobering and enlightening viewing that shares the necessity for balance between humans and nature and the importance of thinking outside the box.

You can watch ‘The Biggest Little Farm’ on many online platforms, including Amazon Prime. You can also read the companion picture book ‘Saving Emma the Pig’ by John Chester and illustrator Jennifer L. Meyer. You can also tour Apricot Lane Farms if you’re in the area but make sure to check their website and make sure they’re open to the public. Sign up for their mailing list to get updates on the farm.