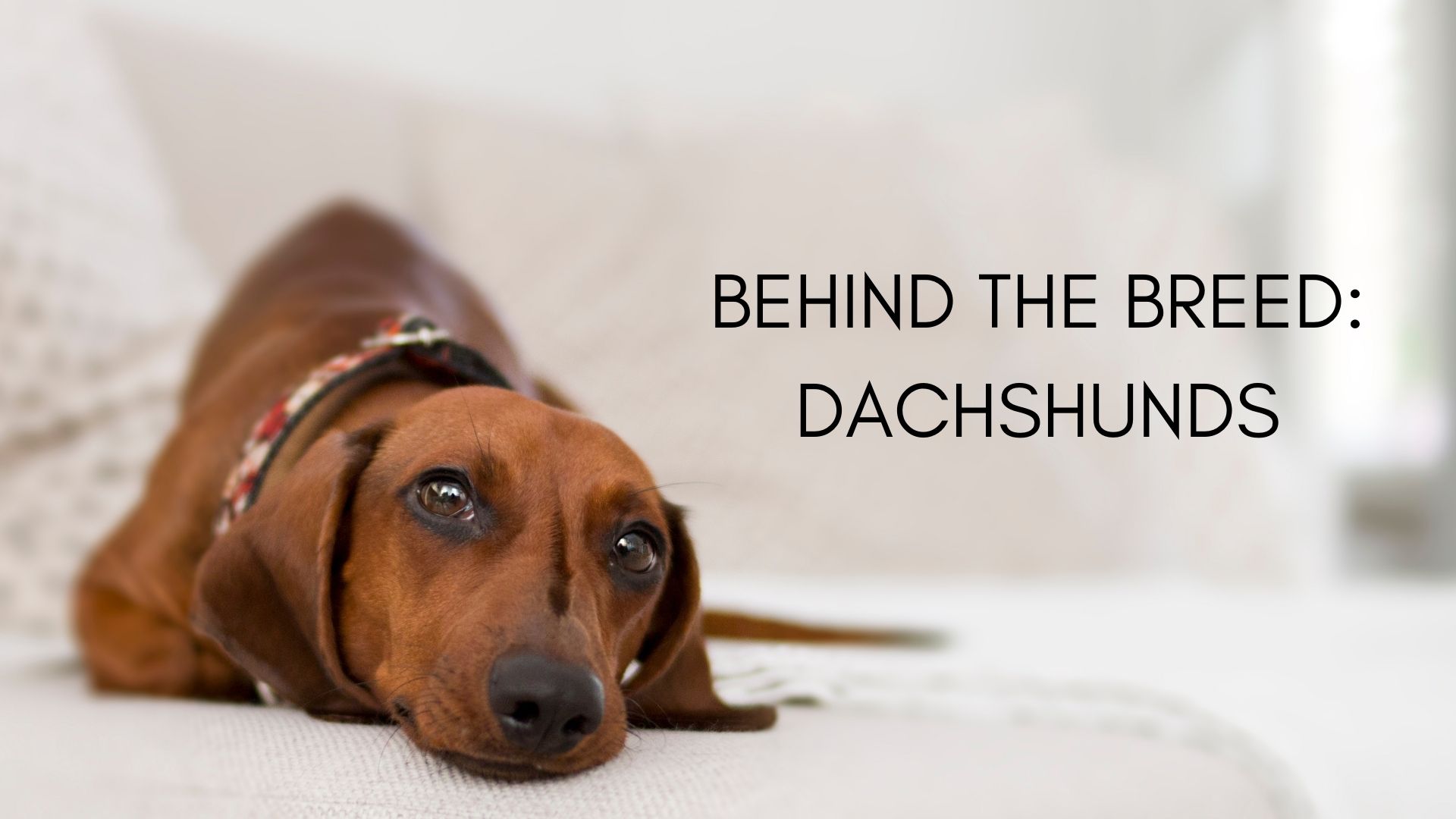 These small and spunky dogs were originally scent hound dogs that hunted animals like badgers and foxes but nowadays, they’re great family dogs! Dachshunds are short but long dogs with friendly temperaments and high prey drives/wandering potential. They’re intelligent, brave, and playful but can be stubborn and independent. As a small dog, dachshunds would be great in an apartment or tiny home but one without a lot of steps, as their long back is prone to disk problems.

The meaning of the name for this breed is indicative of their history. In German, ‘dachshund’ means ‘badger dog’ and dachshunds were developed to dig into a badger den to root it out! They also hunted foxes, rabbits, weasels, and even wild boars. Many of the prey they hunt are significantly bigger than they are, a disadvantage that dachshunds made up for with a tenacious and fearless attitude and clever mind. While standard dachshunds today are usually 16-32 pounds (with miniatures weighing 11 pounds and under), there historically were several sizes of the breed used for different prey. Larger dachshund hunted boar and badgers, medium sizes ones went after foxes and deer, and small dachshunds hunted rabbits/hares and weasels.

Nowadays, there are two sizes of dachshunds and three coat varieties. As mentioned, standard dachshunds are usually 16-32 pounds while the miniature weighs 11 pounds or less. Dachshunds that are between 11-16 pounds are actually called tweenies (but this isn’t an official classification with the American Kennel Club). In Europe, classification is based on chest circumference and fall into three sizes (Standard, Miniature, and Rabbit).

Despite their small size, dachshunds have plenty of stamina and energy. They love playing, walks, and digging! Training also needs to be fun, interesting and positive, as dachshunds can get bored easily and are quite stubborn. Their coats do shed a bit but regular brushing and the occasional bath can help keep them clean. If you live in an area with cold winters, sweaters will help keep your dachshund warm. Smooth coat dachshunds are relatively intolerant of the cold. Additionally, their droopy ears are susceptible to fungus, bacteria, and mites so regular cleaning will be necessary.

Like any dog with a long back, dachshunds are prone to back problems and there are plenty of ways to prevent something bad from happening. Having lots of stairs in your house isn’t a deal-breaker for dachshunds but you have to be willing to put in some work to make things safe for the small and long dog. Ramps on furniture and carrying them on stairs can help prevent the strain that jumping and climbing put on a dachshund’s back. Baby gates can prevent a dachshund from attempting to climb the stairs alone. Acute injuries, age, and intervertebral disc disease are all ways that dachshunds can hurt their back. Jessica Rhae, the author behind ‘You Did What With Your Wiener?’ has a plethora of resources and tips on owning Dachshunds, including the truth about their back problems and info on intervertebral disc disease. Any dog owner can learn plenty from Rhae’s work but her site is especially helpful for dachshund and other small dog owners.

Ultimately, dachshunds can be a really great companion, especially for families or those living in apartments. These dogs are active, playful, and really bond with their people. They love digging and burrowing so don’t be surprised if you find your dachshund snuggled up in some blankets! There are some possible back problems that can happen but treatment and prevention can really help.

Do you have a dachshund?

0 comments on “Behind the Breed: Dachshunds”