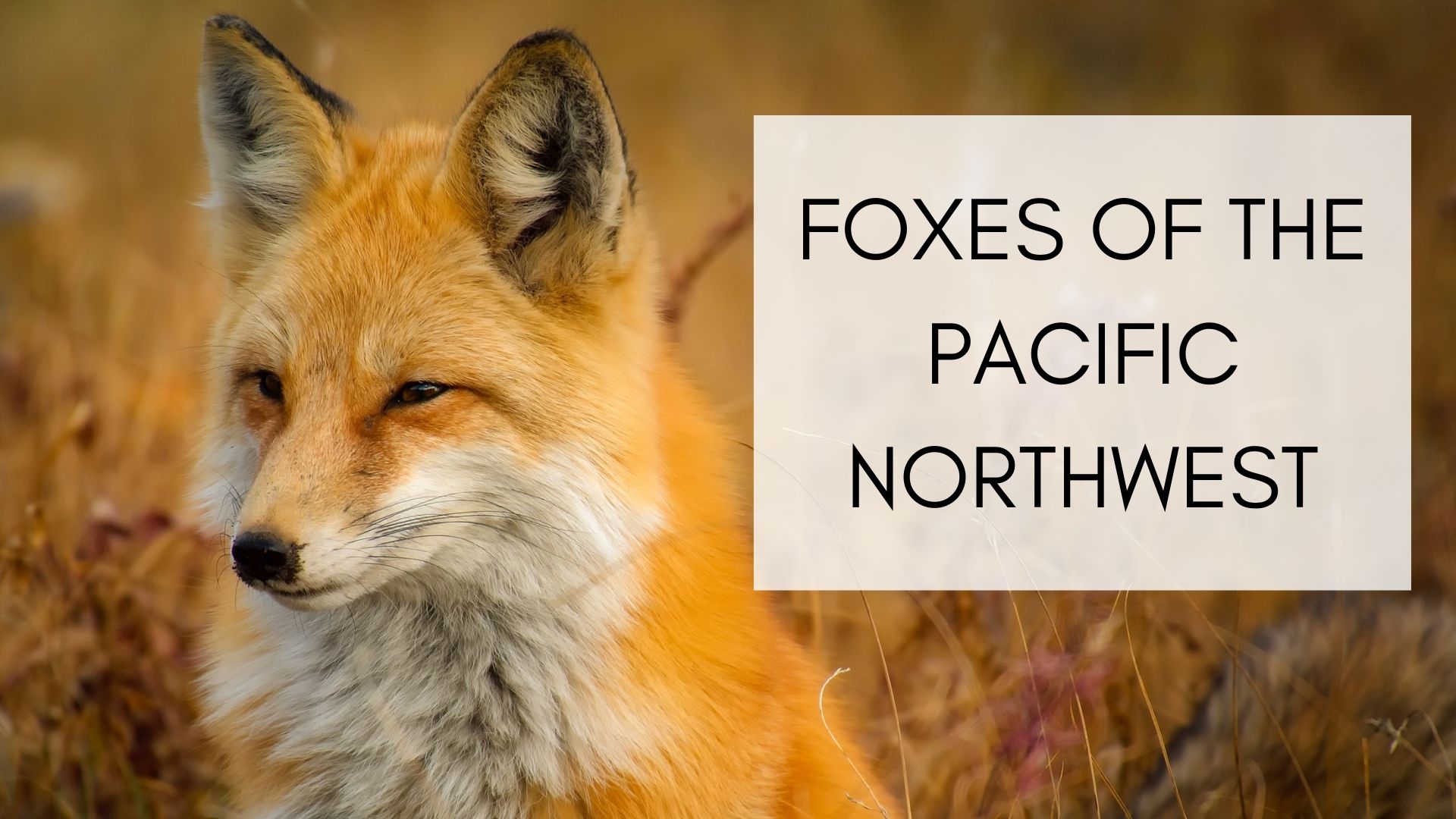 The Pacific Northwest is home to many mammals, including a couple fox species! There are 12 different extant fox species found all around the world but the red fox, arctic fox, gray fox, and kit fox call parts of the northwest home. There is even a small population of Cascade red foxes that are considered a subspecies of the red fox. As a member of the Canidae family, foxes are related to wolves, coyotes, and even domesticated dogs. While there are some domesticated foxes found in the world, they can make terrible pets and there are plenty of fox behaviors that you’ll never be able to manage.

There are some similarities between the different types of foxes. First and foremost, foxes are great hunters, in part because of their great senses. Foxes have heightened hearing that helps them pinpoint small mammals, even under snow. Foxes will also have litters of pups in the spring after a relatively short gestation period (roughly 53 days) and litters can consist of 4-14 pups (also known as kites). In the wild, foxes will usually live 3-5 years but some have been known to live 10-12 years in captivity.

Red foxes are resourceful animals with a reputation for being intelligent and cunning. They’ve been found in a variety of habitats, ranging from the Arctic tundra to the arid desert. Like coyotes, red foxes can easily adapt to living around humans and can strive around farms, cities, and other urban places.

They’re relatively small and can stand up to 15 inches tall. Their tails make up for a good portion of their body’s length and can be 14-16 inches long. These foxes are able to adapt to different environments and often live on a diet of small mammals, like rabbits and rodents, and birds. They will also eat fruit, vegetables, fish, frogs, and even garbage and pet food!

Many red foxes, as you might imagine, have a red coat but some have been known to have golden, reddish-brown, silver, or black coats. Some will have a cross/brant coat, which is a yellowish-brown coat with a black cross extending between the shoulders and down the back. They have double coats with guard hairs and a soft undercoat.

Their coats have actually resulted in humans hunting or breeding red foxes. Around the world, there are fur farms where foxes are bred specifically for their coats. Conditions at these farms can be particularly awful, like one fur farm in Poland where some foxes had sadly resorted to cannibalism after being left without food.

The Cascade Red Fox is actually an endemic subspecies of the red fox in Washington’s southern Cascade Mountain Range. There is no known resident population north of the I90 corridor. This subspecies has three color phases: red, cross (a yellowish-brown coat with black cross extending between shoulders and down back), and silver/black. They prefer the open, drier subalpine forest that’s east of the Cascade crest and are prey generalists of small and mid-size mammals, fruits, insects, birds, and carrion/decaying animals like pocket gophers, voles, and hares.

Kit foxes are found in desert semiarid regions and are most often found in the southwestern United States. There is a small population found in eastern Oregon but little is known about the northern range of this particular fox species. However, biologists from the Oregon Department of Fish and Wildlife spent a few years studying the kit fox population in the state.

Kit foxes are small and slim, with long legs and large ears. Their coats are grizzled brown and gray, with a few white spots. Seeing these foxes during the day is relatively rare, as adult kit foxes are often nocturnal. Young ones have been known to be occasionally active in the late afternoon.

As mentioned, this fox species can be found in different parts of the southwestern United States, like Joshua Tree National Park and the San Joaquin Valley in California. However, kit foxes are all facing threats like urban and industrial development, loss of native habitat, pesticides and rodenticides, fatal human interactions (primarily being hit by cars), and climate change. As the agricultural and energy industries grow in the US, the grasslands that kit foxes rely on are being segmented or built on.

Gray foxes, as you might imagine, have a grizzled gray coat with a black patch on the side of their faces and a few white patches on the inside of their legs, throat, and belly. They’re solitary most of the year but while pups are young, both parents help care for them.

This fox species calls the very northern parts of Alaska and Canada home and can survive in the frigid Arctic temperatures that can get low as -58°F. Its white double coat, furry feet, short ears, and short muzzle all help the arctic fox deal with the cold and camouflage into the snow. Its coat also changes to brown during the summer.

Threats to arctic foxes include the fur trade, offshore drilling in the Arctic, and climate change. These foxes are mostly found on the tundra and pack ice so warmer temperatures and melting ice greatly impact their daily lives.

Foxes of all kinds are incredible animals that can often adapt to different environments. Their keen sense of sight and hearing help them hunt small mammals but they’ve also been known to eat fruit and vegetables. Some have been bred to be more friendly to humans and they’re in the same family as domestic dogs, which has led to some being pets. But the legality of keeping a fox as a pet depends on where you live and there are so many other factors to consider too.

*Scientists have a taxonomic rank of living and fossil organisms as a way to biologically classify both fauna and flora. While all the foxes listed here are a part of the Canidae family, the gray and island foxes are a part of the Urocyon genus and there are twelve different species in the Vulpes genus.