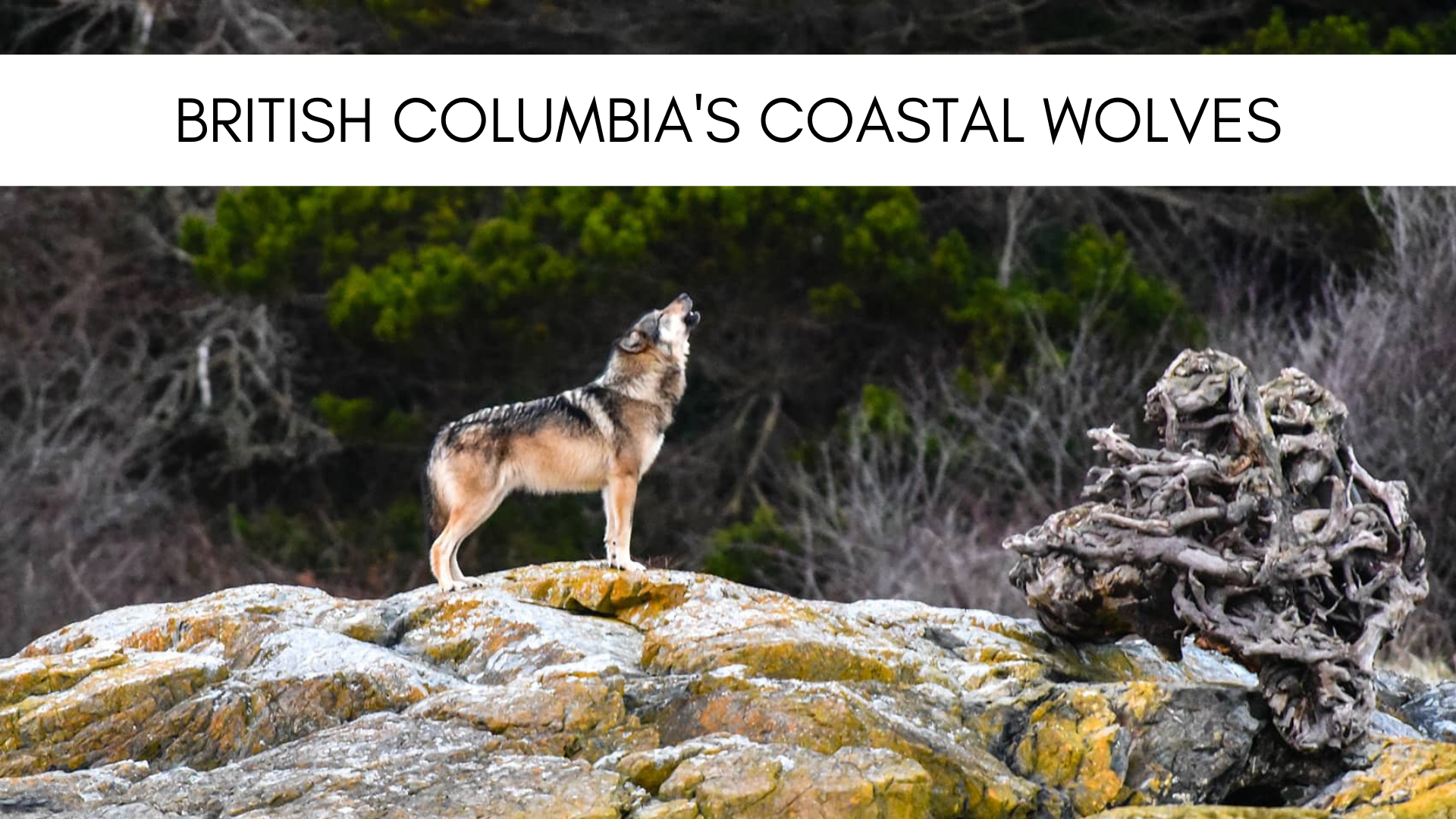 Coastal wolves are found west of British Columbia’s Coast Mountain Range, in the Great Bear Rainforest (a large but remote temperate rainforest), and on many islands and archipelagos in the Salish Sea and along BC’s coast. They’re able to move between the islands and the mainland by swimming, even swimming as far as 7.5 miles to get to a new area.

There are actually two types of coastal wolves, island coastal wolves and mainland coastal wolves. Both coastal wolf populations rely heavily on seafood, particularly salmon and other fish, for their diet and are proficient swimmers because of that. They’ve also been seen foraging for barnacles and clams, hunting otters, and scavenging whale and seal carcasses.

Their diet and swimming capabilities aren’t the only factors that distinguish these wolves from other gray wolves. Coastal wolves are also much smaller, usually weighing 75-80 pounds, and have a coat that’s more reddish-brown in color. In North America, gray wolves often stand 26-32 inches tall and can weigh over 100 pounds, making them around the size of a Great Pyrenees and about 20% bigger than coastal wolves.

These wolves are elusive and rare so seeing one can be quite an experience. British filmmaker Bertie Gregory once described coastal wolves as having “this magic and aura around them”. Many are seen in British Columbia but there are a few populations in southeastern Alaska and some once roamed down to California for a short spell.

One of the most famous coastal wolves is Takaya, a wolf who lived on Discovery and Vancouver Islands and stole the hearts of many people around the world. He was a solitary wolf and spent almost nine years by himself, unusual behavior for wolves. These animals, like other canines, are pack animals and yet, Tayaka was usually seen alone and his howls left unanswered. Cheryl Alexander, a conservation photographer, spent a lot of time with him and was the one to name Tayaka. She even produced a documentary about Tayaka, titled “Takaya: Lone Wolf” (2019), and wrote a book about him with the same name.

In 2012 and 2013, his popularity grew to the point where people began trying to just catch a glimpse of him in the wild. This left some worried about a possibly dangerous encounter between Takaya and humans. The British Columbia Conservation Officer Service even warned the public about keeping their distance but that warning was often ignored. While most people did keep some space between them and Takaya, repeated human contact could have resulted in the wolf losing his fear of humans. Habituation, as it’s called, can be dangerous for both humans and wild animals, as close interactions can still result in serious injuries.

In late January 2020, Takaya was nearly 11 years old and eventually left Discovery Island for Vancouver Island. There are a few theories why he ended up on the large island near Victoria, BC’s capital city, including trying to find a mate, food loss, and a misjudgment of ocean currents. He spent two days wandering Victoria before being cornered and sedated by police.

Conservation officers relocated Takaya to a thick inland forest along the west coast of Vancouver Island more than 100 miles away from Victoria a couple days later. Over the next few months, there were a few sightings of Takaya, including some near the fishing community of Port Renfrew. After years of interacting with people, Takaya lacked that fear of humans, a trait that sadly led to his death.

On March 24th, 2020, Takaya was shot and killed by a hunter after getting too close to the hunter’s dogs. People around the world were heartbroken over his death and artists even started sending Cheryl Alexander artwork they made of Takaya. Eventually, Alexander founded Takaya’s Legacy, an organization that tells his story and helps wolf conservation in British Columbia.

The coastal wolves of British Columbia and southeastern Alaska are an incredibly unique subspecies of gray wolves and like other wild animals, have had unfortunate interactions with humans over the last few decades. It’s still legal to hunt wolves in the Canadian province and according to the Raincoast Conservation Foundation, more than 1,200 wolves are killed each year just for recreational purposes. Even the coastal wolves’ diet of salmon and seafood hasn’t saved them from the seemingly mismanaged wolf cull program that the government implemented to save the local and endangered caribou.

Coexisting with wild animals like the coastal and gray wolves found in British Columbia and Alaska is vital for the planet. As apex predators, wolves play an important role in their environment and can actually help stabilize ecosystems (although there’s no simple solution to the man-made problem of wolf extermination in certain parts of North America). In fact, the reintroduction of wolves in Yellowstone has even changed rivers in the park.

Wolves are an important part of the North American environment and we need to find a way to coexist with these apex predators. This goes for the elusive coastal wolves as well.

Have you ever seen or even heard of coastal wolves before? Let me know in the comments!