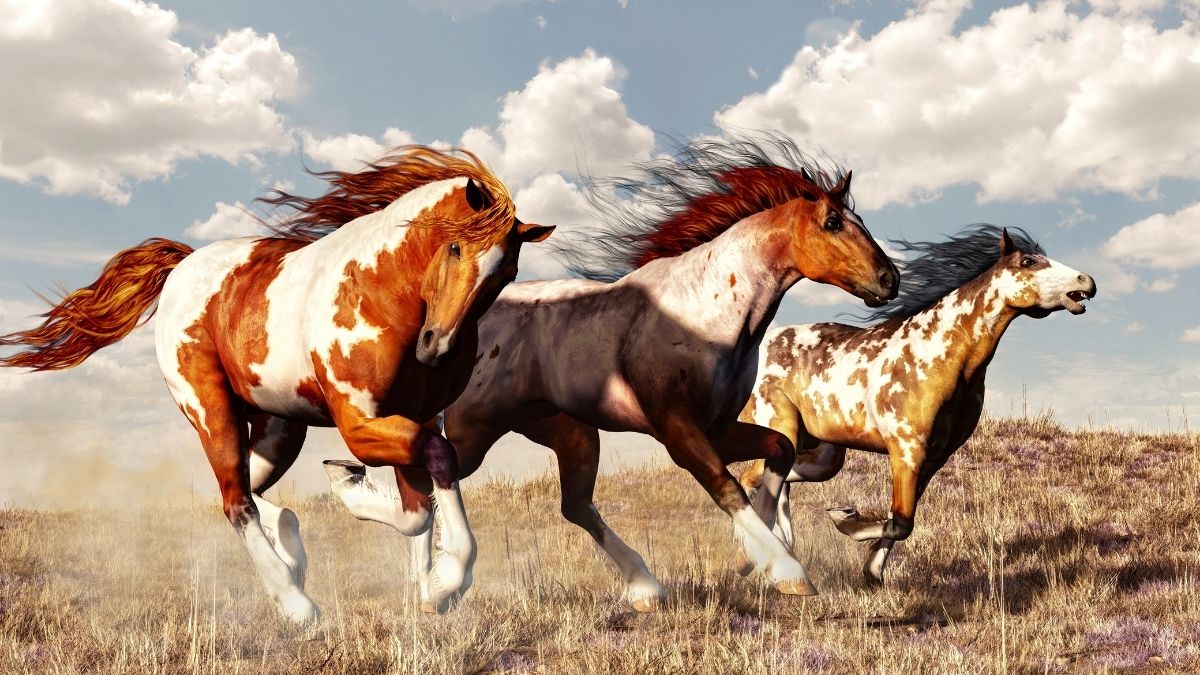 In the world, there’s only one species of domestic horse (and 400 different breeds) and our relationship with this animal goes back roughly 4,000 years. Before the industrial revolution and advent of engines, horses were essential and integral to many societies. They helped us pull wagons, with transportation (especially over long distances), and even plow fields. Humans have developed a strong bond with horse over the millennia and they’ve played a large role in history around the world.

But nowadays, it’s not unusual for folks to not interact with horses for years (or even their whole lives). Horses were integral in history but technology over the last century or two has changed the way we do things. Less face time with these large animals can easily lead to common misconceptions. Here are just a few.

Most horses are domestic but there are wild/feral ones. Free roaming mustangs in North America are said to be feral descendants of domestic horses brought to the continent 400+ years ago. The wild mustangs in the American West are thought of as a species of cultural importance, though there’s debate around whether these horses are wild, feral, or a reintroduced species in North America. Fossil records indicate that horses did exist in North America but these animals went extinct from the continent roughly 10,000 – 12,000 years ago. The horses we know today were domesticated 4,000-5,000 years ago in Asia before moving to Europe and beyond.

The arrival of Spanish conquistadors/colonizers in the Americas during the early 16th century also brought the horses we now know. Wild mustangs have existed in North America for centuries but have only recently been somewhat protected by US federal law. Only wild mustangs that live on land managed by the Bureau of Land Management and US Forest Service are protected by the Wild and Free-Roaming Horses and Burros Act of 1971.

Ponies aren’t actually baby horses, as baby horses are actually called foals and colts! The major difference between horses and ponies is size, as horses are generally taller than 14/14.2 hands and ponies are shorter than that. Horses and ponies are measured in hands, a unit that’s only used with this species and the current hand is 4 inches. Height for the species is measured from ground to withers, the highest part of a horse’s back that lies at the base of the neck and above the shoulders. In addition to different proportions, ponies usually have thicker coats, manes, and tails than horses. As far as proportions, ponies have shorter legs, thick heads with broad foreheads, and overall stockier proportions.

There is a bit of a grey area with ponies and horses. The Connemara Pony, for example, is widely considered a pony, despite its average height of 13-15 hands. And then there are miniature horses, which are under 34 inches tall but not considered ponies. Mini horses are also bred to resemble a full sized horse on a much smaller scale and are more refined than ponies. In an article about the differences between horses and ponies, Kerry Wolfe even described mini horses “as if they’d been shrunk in the evolutionary dryer” because their proportions were more similar to horses than ponies.

It’s true that both dogs and horses are companion animals to humans and have played a big role in our history and evolution. But the two species are drastically different in almost every other way. Horses have their own social structure that’s quite different from dogs and humans. As strict herbivores, their diets are rather disparate from canines of all kinds too. Horses are also a prey species, making them just a bit more skeptical of new situations or possible dangers. (Although, this TikTok has me doubting whether or not horses are just big dogs…)

Horseback Riding is Just Sitting on a Horse

If you’ve ever taken horseback riding lessons or ridden a horse, you know how absolutely untrue this misconception is. While good riders make riding look easy, being on a large animal like a horse takes plenty of work, both with your muscles and mind. Every part of your body is used while riding a horse and even just a simple trail ride can easily make you feel sore after! Plus, you have to be in constant communication with your horse while riding.

Horseback Riding Is Not Exercise Nor Is It A Sport

Again, this is wildly untrue. Equestrian sports, like dressage, jumping, cross country, and even rodeo, all require strength and training. While on a horse for any reason, you’ll be working your core and leg muscles and certain work outs can help improve your riding.

Horse Are For Rich People

It’s absolutely true that owning and riding a horse can be incredibly expensive and thus, generally inaccessible to those without a sizable disposable income and plenty of time. This has become particularly apparent as wealth inequality continues to grow. But, that doesn’t mean that interacting with horses is strictly for rich folks or those who are young and athletic. There are programs and facilities across the country that make horseback riding more affordable and that use horses in various types of therapy, as there are countless physical and emotional benefits to interacting with and riding horses.

Animals as Natural Therapy (ANT) and the Northwest Therapeutic Riding Center (NWTRC) are two such organizations in Washington’s Whatcom County. ANT offers behavioral and mental health programs for young folks, veterans, families, and elders, with the belief and knowledge that animals can teach us important life skills. While there are many types of animals that call ANT home, horses are particularly integral to the nonprofit’s work. NWTRC, on the other hand, provides adaptive horseback riding lessons to individuals with disabilities. These lessons are tailored to individual needs and skills but provide many benefits like improved physical strength, self confidence, and social skills. Both ANT and NWTRC are just two of the many organizations that work to bring horses and humans together.

This is sort of untrue, as horses can sleep while standing up. But in order to get REM sleep, they do need to lie down and some with do so just to be comfortable! Horses require less REM sleep than other species and will spend more time standing while sleeping, as doing so allows for a quick getaway if predators are nearby. They’re actually able to do this because of something called a “stay apparatus”, a system of ligaments and tendons that keep them upright while asleep.

Riding Horses is A Phase That Just Girls Go Through

While there is a common association between horses and girls in pop culture, riding lessons aren’t just for girls and women. People of all genders and ages can benefit from riding lessons and should be encouraged to try it! For many, riding is a lifetime activity and it’s not one you have to start early on in life. It’s entirely possible to start lessons as an adult.

When you think of horses and the wild west, you might think of westerns made in the 1950s and 1960s, like ‘The Good, the Bad, and the Ugly’. Or of John Wayne, a name that’s culturally synonymous to cowboy in the US, as out of the more than 140 films he made, 83 were Westerns! You might also think of clashes with Native Americans, bank robbing, the iconic cowboy hats, or guns.

In reality, actual cowboys in history were far different than the stereotypical ones we might think of today. First, there were a significant number of black, indigenous, and Mexican cowboys. There are estimates that 1 in 4 cowboys were black and a bigger proportion were Mexican. Cowboy history also has strong ties to the lives of Mexican cattlemen known as vaqueros.

Horses have played an important role in human history since domestication ~5,000 years ago. While the industrial revolution slowly fazed out horses from work they had done for centuries, these animals are still incredibly important! There are plenty of misconceptions about them but hopefully, you learned a little bit about these large animals.

2 comments on “A Few Misconceptions About Horses (And What’s True!)”