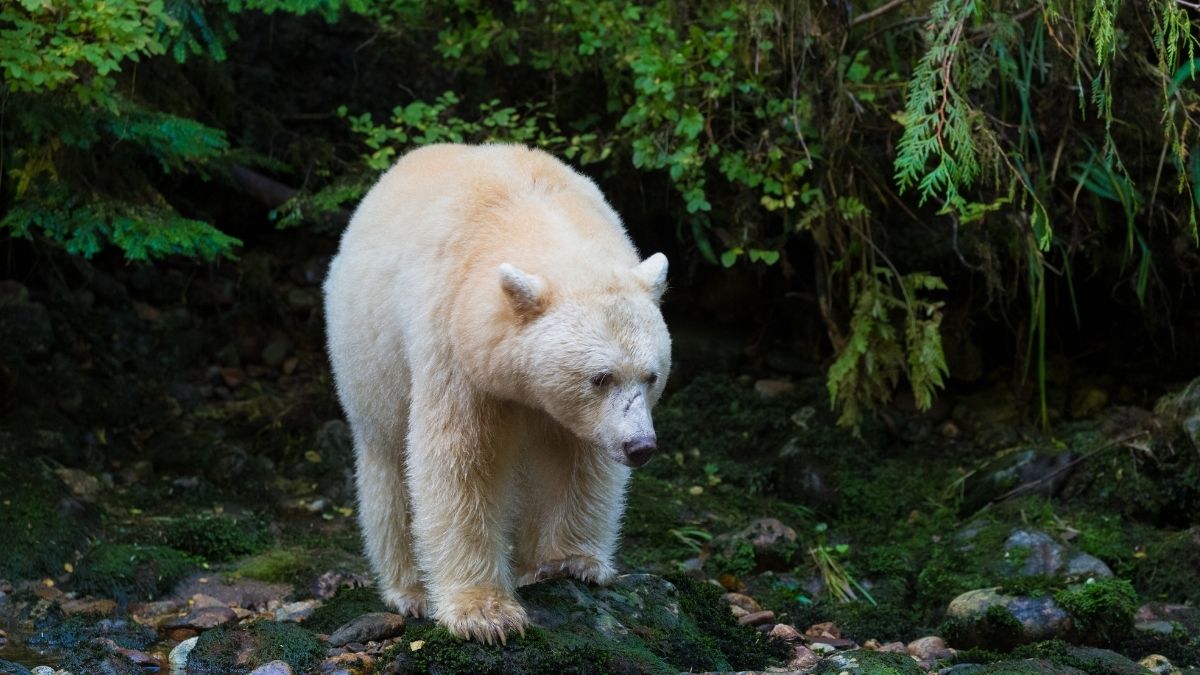 Covering 6.4 million hectares (15.8 million acres) along British Columbia’s north and central coast, this forest is home to vivid landscapes and a highly diverse collection of plants, animals, and marine life. The Great Bear Rainforest is just one of the temperate rainforests in North America but is about the size of Ireland and is the largest coastal temperate rainforest in the world. And it also happens to be the only home to a rather special kind of bear.

One of the most iconic animals in the Great Bear Rainforest is the spirit bear, an all-white black bear that’s sacred to First Nations communities in the area. These bears, known as kermodes, get their white/creme coat when their parents both have the recessive gene and are exclusively found in this forest. While kermodes aren’t albino bears, as they do still have pigment in their eyes and skin (something that albinos of any species don’t have), they are incredibly rare.

These bears thrive on an omnivore diet of Pacific salmon, fruits, grasses, roots, fawns, insects, berries, nuts, and more. Like the other black bears in the forest, kermodes are incredibly important to the ecosystem and growth of the forest. They’ll often take salmon they caught deep into the forest and what they don’t eat decomposes and turns into important nutrients for the surrounding plants and trees.

Kermodes aren’t the only animals in this forest, as the Great Bear Rainforest is home to a variety of ecosystems and species. The Great Bear Sea is home to some of the largest kelp forests in the world and species like whales, sea otters, and salmon call the bodies of water in and around the forest home. You can also find bald eagles, rufous hummingbirds, little brown bats, coastal wolves, northwestern salamanders, and American pikas in various parts of the massive forest.

Unfortunately, the Covid-19 pandemic has made travel to the Great Bear Rainforest virtually impossible for those in the United States, as the Canadian/US border has been closed to all nonessential travel since March 2020. But once the border opens (whenever that may be) and travel is much safer for all involved, you can visit the Great Bear Rainforest and see it’s beauty for yourself.

Roads can only get you so far in this forest but there are other options and several remote lodges on the coast you can stay at. Hiking is a great activity in the forest, as there are many great trails! Salmon return to local rivers from late August to mid-October and draw in wildlife like Kermode bears, making it more likely you might see an elusive spirit bear during that time. Like any wild animal, keep your distance! Photos from afar are the best souvenirs.

If you can’t visit the Great Bear Rainforest, consider watching Great Bear Rainforest, a documentary that highlights the wildlife of the forest. This film took its creators three years to film and it’s narrated by Canadian actor, Ryan Reynolds. Unfortunately, it’s currently only being shown in a few IMAX theaters in the US and Canada but keep an eye out to see if it’ll be showing somewhere near you!

The First Nations of the Great Bear Rainforest

When visiting or learning about the Great Bear Rainforest (and much of North America as a whole), it’s important to learn about and support the indigenous peoples that call that land home. Around the world, indigenous people make up less than 5% of the world’s population but protect 80% of the world’s biodiversity and the Pacific Northwest is no exception. In British Columbia, First Nations have called areas like the Great Bear Rainforest home for thousands of years and many coastal First Nations still consider the area homes, as they never signed treaties that gave up their land rights. People like MaryAnn Enevoldsen of the Homalco Nation and Doug Neasloss of the Kitasoo/Xai’Xais have fought against trophy hunting in the forest, particularly hunting of Kermode bears.

Caribou restoration in British Columbia, as another example, has several First Nations to thank for its success. The West Moberly and Saulteau Nations took a holistic approach to the declining caribou restoration and won major conservation battles, including expanding the Klin-se-Za Provincial Park. Local First Nations have and continue to protect the Great Bear Rainforest and many other areas, as their past, present, and future is tied to the land. Any sort of conservation work needs to include the indigenous people of the area.

Logging in the Great Bear Rainforest

The Pacific Northwest, as a region, has been used for logging since the mid 19th century. In fact, the first mill was set up in Fort Vancouver in 1828 by the Hudson Bay Company and the California Gold Rush of 1848 created a surge in demand for lumber from the Salish Sea area. There are plenty of towns in the northwest that can thank the lumber industry for their beginnings but clearing old-growth forests did have massive effects on the environment we’re still dealing with. And once these old-growth forests are gone, they’re gone.

Unfortunately, the Canadian and US governments have put logging old-growth forests back on the table. In British Columbia, recent approvals for logging projects in old-growth forests have gone up despite the provincial government’s promise to protect those same areas. After decades of fighting, most of the Great Bear Rainforest is, thankfully, protected from logging and permanently off-limits to the timber industry. That sadly doesn’t mean all is well in this rainforest, as there are still loopholes being exploited. Speaking to The Narwhal, Tavish Campbell said the logging industry is still in business in the area and it’s been greenwashed. Campbell also said that

“For us on the ground, I don’t even know the words to describe it. It’s pretty devastating for us to see what’s going on … and to know at the same time that people think that the Great Bear Rainforest is saved… [There are] so many different loopholes and ways for industry to make everything look good on paper, but still give the industry what it wants to cut, which is the most valuable wood, which is the big trees.”

Why The Great Bear Rainforest is Important

Areas like the Great Bear Rainforest are incredibly important for numerous species, biodiversity, and in the fight against climate change. Trees store a massive amount of carbon (something like 1,000 tonnes is stored in a single acre of the Great Bear Rainforest) and thanks to black/Kermode bears, salmon provides roughly 80% of the trees’ nitrogen, an essential nutrient for trees and other plants. But with trees being logged and salmon being wiped out by climate change, things are not looking good. And these things can easily have a domino effect on other species.

The key to a safe and promising future for all of humanity is fighting climate change. This can be done by supporting biodiversity and protecting areas like the Great Bear Rainforest, holding the world’s top polluters (the richest of the rich and 100 major corporations) accountable, planting native flowers and trees in pollinator friendly gardens, and supporting legislation like the Green New Deal.

The Great Bear Rainforest is an amazingly beautiful temperate rainforest on the coast of British Columbia. It’s home to some truly iconic species, including two that can only be found in or around the forest (spirit bears and coastal wolves). Like other rainforests and ecosystems, this forest needs our support and protection, as it provides so much for humans and animals alike.

Have you’ve ever been to this forest? Let me know in the comments!

2 comments on “Spirit Bears and The Great Bear Rainforest”