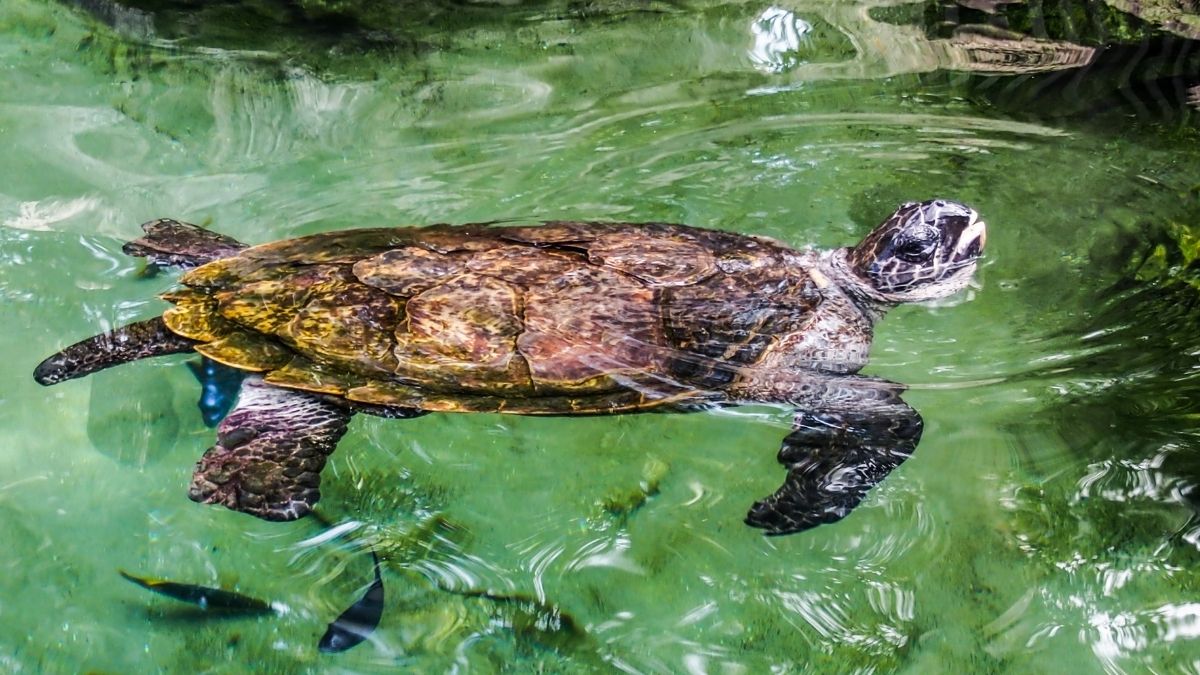 When I think of sea turtles, I think of more tropical waters, like off of the Hawaiian islands or in the Gulf of Mexico. This is for good reason, as sea turtles prefer the warm waters between 30 degrees north and 30 degrees south. In the western hemisphere, that area covers as far north as Mexico and southern California to the middle of Chile. However, winter currents can push many of these sea turtles north and they can sometimes be found off the coast of the Pacific Northwest.

Existing since the time of dinosaurs, there are seven types of sea turtles and six (leatherback, loggerhead, Kemp’s ridley, green, olive ridley, and hawksbill) can be found in every ocean except the Arctic and Antarctic. Most sea turtles travel long distances between their feeding and breeding areas and the leatherback can travel an average of 3,700 miles each way. As marine reptiles, sea turtles need to surface in order to breathe but can often stay underwater for an extended period of time.

Because sea turtles have such an expansive range and many spend most of their life in the water, it can be difficult to study sea turtles at times. It’s estimated that many sea turtles are long-lived, with some reaching the age of 100 years old or more. And while they tend to favor the warmer waters around the tropics, there have been massive changes in the ocean that have to lead some sea turtles finding their way up to the coasts of the Pacific Northwest.

These endangered sea turtles are a rare visitor to the outer Washington coast, as loggerhead sea turtles mostly occur in the tropical and temperate regions of the Atlantic, Pacific, and Indian Oceans. The west coast of Mexico and the Baja Peninsula are particularly important habitats for juveniles of this species and southern Japan is the only known nesting area in the North Pacific.

As adults, they weigh 200-350 pounds and 2.5-3 feet in length. The name ‘loggerhead’ references their large head and their strong jaws allow for them to have a primarily carnivorous diet, which includes horseshoe crabs and conchs. They’re some of the most abundant marine turtles in US waters but are still considered threatened and endangered.

Green sea turtles are the largest of the hard-shelled sea turtles and can weigh up to 700 pounds. They can get up to 5 feet long but most are roughly 3-4 feet long and weigh 300-350 pounds. Their name comes from the solid layer of green-colored fat that lies beneath its shell, which is caused by their strictly herbivorous diet of seagrasses, seaweed, and algae.

In the US, they’re primarily found around the Hawaiian Islands, Pacific Island territories like Guam and American Samoa, Puerto Rico, the Virgin Islands, and Florida. Nesting happens every year along the coasts of Georgia, South Carolina, North Carolina, and Texas. A population has also been seen in San Diego Bay in California and there’s a large population in Australia’s Great Barrier Reef.

These sea turtles are some of the smallest found in the ocean, as they can weigh up to 100 pounds and be 2 feet in length. Olive Ridley turtles primarily feed on jellyfish, crabs, shrimp, and algae in a pinch. They can often be found in shallow soft-bottomed seas near the shore but they also spend time out in the open ocean.

Along with green sea turtles, olive ridley sea turtles are the most commonly encountered sea turtles on the Oregon coast. One was even seen as far north as Tofino on the west coast of Vancouver Island. According to Jim Burke, the Director of Animal Husbandry at the Oregon Coast Aquarium, these sea turtles likely originate off the west coast of Mexico and they usually only reach Oregon beaches unless sick or injured.

Leatherback sea turtles are by far the largest sea turtle and the largest on record was one found in 1988 that weighed 2,015 pounds. This sea turtle species can be found all over the world but the leatherback sea turtles that are sometimes found off the US west coast are currently in a rapid decline. In fact, one study found that leatherbacks foraging off the coast of California have been declining at a rate of 5.6% every year and scientists estimate that these turtles could be gone from the west coast within three decades.

Just the tiniest percentage of the many sea turtle eggs laid actually make it to the sea after being born. Predators, illegal harvesting, and light pollution are some of the biggest threats to sea turtle eggs and hatchlings. Humans have had an immensely negative impact on sea turtles through hunting, fishing net accidents, pollution, and climate change.

Turtles have been known to be bycatch in fishing nets, which is another incredibly harmful human activity to sea turtles. Longlines, fishing lines that can be kilometers long with hundreds or thousands of baited hooks. Sea turtles have, unfortunately, been caught in unattended longlines or other fishing equipment and subsequently drowned.

If You Find A Sea Turtle

If you find a sea turtle on the Oregon or Washington coast, admire it from a distance (roughly 150 feet) and try contacting officials for a rescue, as sea turtles usually show up on our beaches when sick, injured, or stuck in cold water. Attempting to rescue a turtle without the proper training and education can be dangerous to you and the turtle. According to the Oregon Coast Aquarium, olive ridley sea turtles are the most frequently stranded turtles in the Northwest.

One place to call is the West Coast Marine Mammal Stranding Network at 1-866-767-6114. NOAA also has a Dolphin and Whale 911 app available for Apple devices that allows you to report any stranded marine mammals. For more regional-specific resources, check out NOAA’s page on how to report a stranded or injured marine animal. When reporting, make sure to note the exact location and description of the turtle and the state it’s in.

The Seattle Aquarium is the only permit-holding sea turtle stabilization facility in Washington and even helped out with a stranded olive ridley sea turtle that was spotted on a beach in the Cape Disappointment State Park back in 2017. The Oregon Coast Aquarium is the only other sea turtle rehabilitation facility in the northwest authorized by the US Fish and Wildlife Service. It has partnered with other organizations and agencies to rehabilitate and then release several stranded sea turtles found on the coasts of the Pacific Northwest.

The good news is that sea turtles are federally protected under the Endangered Species Act and the US Fish and Wildlife Services and NOAA Fisheries are the lead agencies on sea turtle conservation and recovery on the beach and in the marine environment respectively. Organizations like the Sea Turtle Conservancy, The Ocean Project, and Oceanic Society all work on sea turtle and ocean conservancy. The time to act is now. Fighting against climate change, including reducing the amount of plastic and fishing lines in the ocean, can help sea turtles and many other species.

Have you ever seen a sea turtle before? Let me know in the comments!

2 comments on “Sea Turtles of the Pacific Northwest”