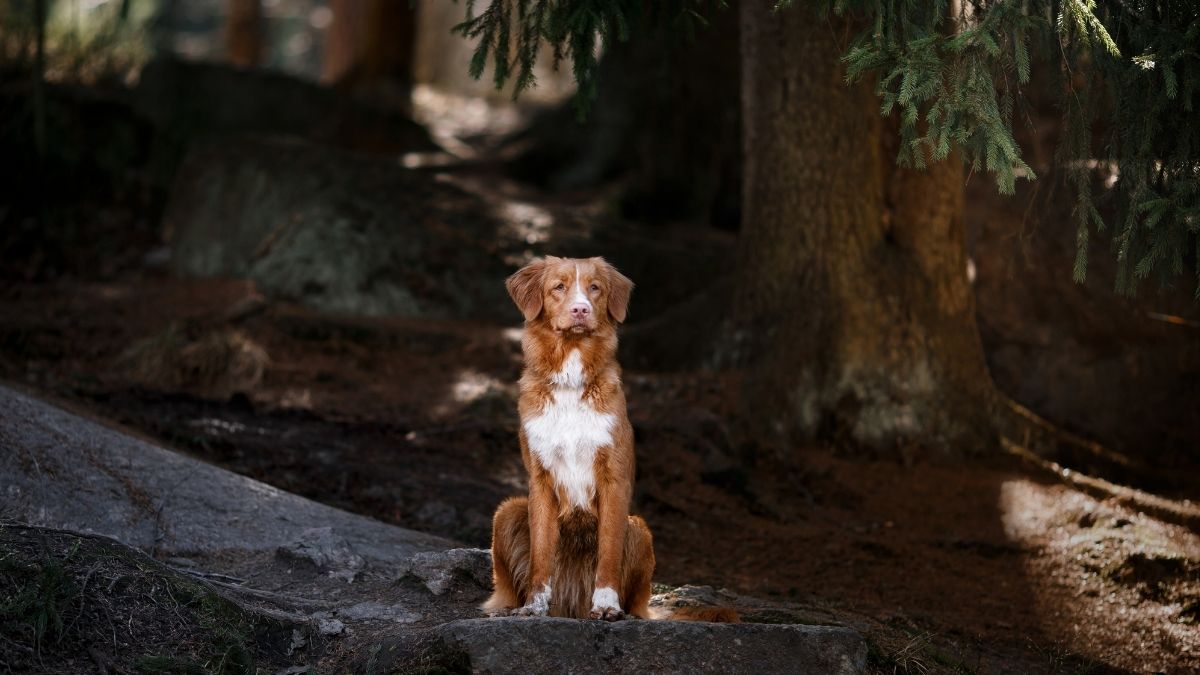 As the smallest of retriever breeds, the Novia Scotia Duck Tolling Retriever were bred as hunting dogs and originated in the Little River district of Novia Scotia in Canada. Nicknamed ‘tollers’ and originally called Littler River Duck Dogs, these dogs helped lure ducks to a certain area, making it easier for hunters to shoot them. Like other retrievers and hunting dogs, tollers are incredibly intelligent, energetic, and affectionate. They’re also adaptable and great in any weather, meaning they’re great in apartments, homes, and in urban or rural places. For those with an active life and time to train, a Novia Scotia Duck Tolling Retriever would be great!

These dogs, as the name suggests, have a history in Canada’s Novia Scotia province. The people of the Mi’kmaq First Nation were inspired to develop a hunting breed by the behavior of foxes in the area, who patrolled the shores of rivers and lakes to snatch any ducks that came close enough. In the 19th century, the Acadian community of the Little River area in Nova Scotia’s Yarmouth County was then inspired by the Mi’kmaq’s tolling breed and developed the Novia Scotia Duck Tolling Dog from breeds like cocker spaniels, retrievers, collies, and Irish Setters.

Toller might be a word you’ve never heard of but it comes from the Middle English word ‘tollen’, which means ‘to entice, lure, attract’. In this case, tolling is the act of luring ducks to a certain spot, which is exactly what Tollers do. Tollers will play at the edge of a body of water, romping and retrieving as a way to draw the attention of ducks. Hunters are nearby but usually hidden and once the ducks get close enough, tollers will run back to the hunter, who will stand and scare the ducks into flight before firing. Tollers will then retrieve any of the fallen birds.

Tollers usually stand 17-21 inches at the shoulder and weigh 35-50 pounds, making them much smaller than other retrievers and closer in size to border collies. These dogs look like if you mixed an Irish Setter, Golden Retriever, Border Collie, and Corgi all together. Their thick, double coats come in copper, crimson, and golden crimson with white markings found on some chests and faces. While they are relatively small compared to other breeds, Tollers still need plenty of care and their water-repellant coats will need regular brushing.

Their personalities and temperaments make these dogs wonderful companions, as some have described them as having a personality that “lies somewhere between that of a Golden Retriever and a terrier”. If you’re looking for a goofy, adaptable, active, and curious dog, a Toller might just be for you! These dogs live life with lots of enthusiasm and are goal orientated, which can make training and dog sports a lot of fun. But without consistent, fun training and something to keep them occupied, they can become a bit of a problem.

While these dogs can be fantastic, Tollers aren’t for everyone. If you’re looking for a couch potato, this breed won’t be for you because while they are happy to be where their people are, tollers need plenty of exercise. They also have a high prey drive, meaning that they might chase cats, chickens, or other small animals. Tollers also have a high pitched, frantic scream that they use when excited and it can sound a bit concerning if you’re not expecting it.

If you’re looking for a dog to join you on runs, hikes, hunting trips, or participate in dog sports like agility courses, a Novia Scotia Duck Tolling Retriever might be for you! Their medium size and adaptability make them great in all sorts of living situations, from farms to family homes to apartments in a city. There are some downsides to this breed but with the right information, training, and schedule, a Toller can be a fantastic companion.

0 comments on “Behind the Breed: Novia Scotia Duck Tolling Retriever”