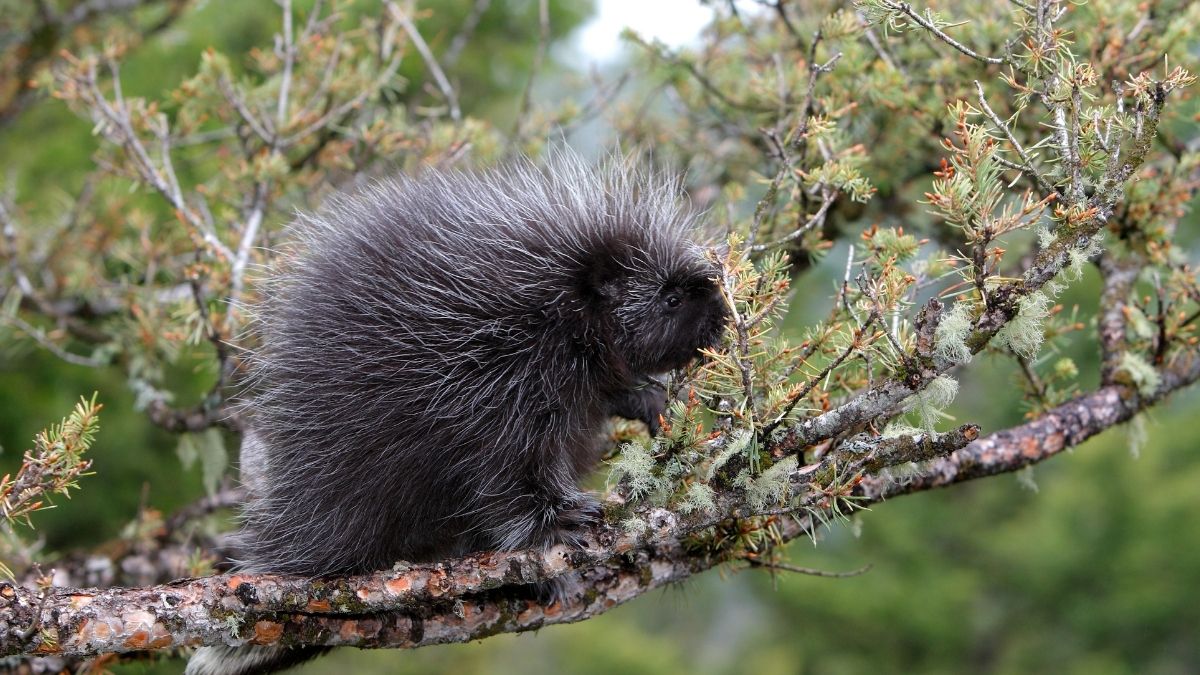 The North American porcupine is one of the largest rodents on the continent and can be easily recognized by its coat of 30,000+ quills. These mammals can be mostly found in forested areas around Washington state but have been known to thrive in brushy wetlands and riparian zones. Porcupines are one of the largest rodents in North America, second only to beavers, but they can be difficult to find because they spend days or even months in the same tree. iNaturalist does have records of over 300 observations of porcupines along the west coast!

The average weight of a North American porcupine can range from 15 to 27 pounds and they can get to be 25-31 inches long! They have relatively short legs but are surprisingly good climbers and swimmers and rely on a diet of plants, fruit, leaves, and the inner bark of trees. Porcupines are also nocturnal animals that are nearsighted and slow-moving, which means they rely on their quills and strong odor to protect themselves.

These porcupines have two distinguishing defense mechanisms, their quills and their strong odor, which has been described as being like strong human body odor, goats, or even some cheeses. The chemical compound responsible for the smell is R-delta-decalactone and the smell gets particularly pungent when porcupines have raised their quills. This smell serves as a warning to potential threats that these rodents have painful quills and aren’t afraid to use them.

There are roughly 30,000 quills on a porcupine, covering almost its entire body (excluding its underbelly, face, and feet). These quills are modified hairs that are formed into sharp, barbed, hollow spines that are used as a defense and a way to insulate them against the cold. Porcupines can’t throw their quills but when threatened, superficial muscles cause the quills to stand up and out. It’s in this position that the quills are able to detach from the porcupine and the barbs on the end lodge into the attacker’s flesh.

Removing the quills can be incredibly difficult, as the barbs are actually designed to further dig into the skin with normal muscle movements. Some dogs have gotten an entire face full of these quills when trying to catch a porcupine! Immediate treatment is necessary to avoid lasting harm, like possible infections. Veterinary care is important, as removing the quills can be a painful process and removing them at home should be an absolutely last resort.

Unlike some other herbivores, these rodents are fairly solitary and will often only come together for breeding in the fall. Porcupines are able to tighten their skin and hold their quills flat in order to not injure each other during the mating process. However, with so many sharp quills, the occasional self-quilling or quilling from another porcupine can happen but the North American porcupine can release a topical antibiotic that allows them to avoid infection. This antibiotic is great for times when they might prick themselves with one of their own quills or are pricked by another porcupine.

Threats to this species include predators like fishers, wolverines, coyotes, and cougars. Fishers are one of the biggest threats to porcupines, as their ability to move down a tree trunk head first makes it easier to escape the quills and attack the porcupine’s quill-less head. Humans are also threats to these large mammals, as porcupines are considered pests because of their tendency to damage trees and wooden or leather objects. And like some mountain goats, porcupines are also infamous among backpackers because of their love of salt and propensity to eat road salt-covered boots. Lastly, because of their slow movement and nearsightedness, porcupines don’t fare well on roads and some have unfortunately been fatally hit by cars.

North American porcupines are one of the largest rodents on the continent but it’s their tens of thousands of quills that serve as their unique and primary defense against predators. These quills can’t shoot out but they can embed themselves into any predator’s skin and muscles if the porcupine is grabbed. Removing these quills can be an arduous task, as the ends of the quills have barbs that dig deeper into a predator with any sort of muscle movement. Because of that, it’s always best to leave these rodents alone and that includes keeping an eye on your dog while out hiking.

Have you ever seen a North American Porcupine? Let me know in the comments!

0 comments on “Porcupines of the Pacific Northwest”