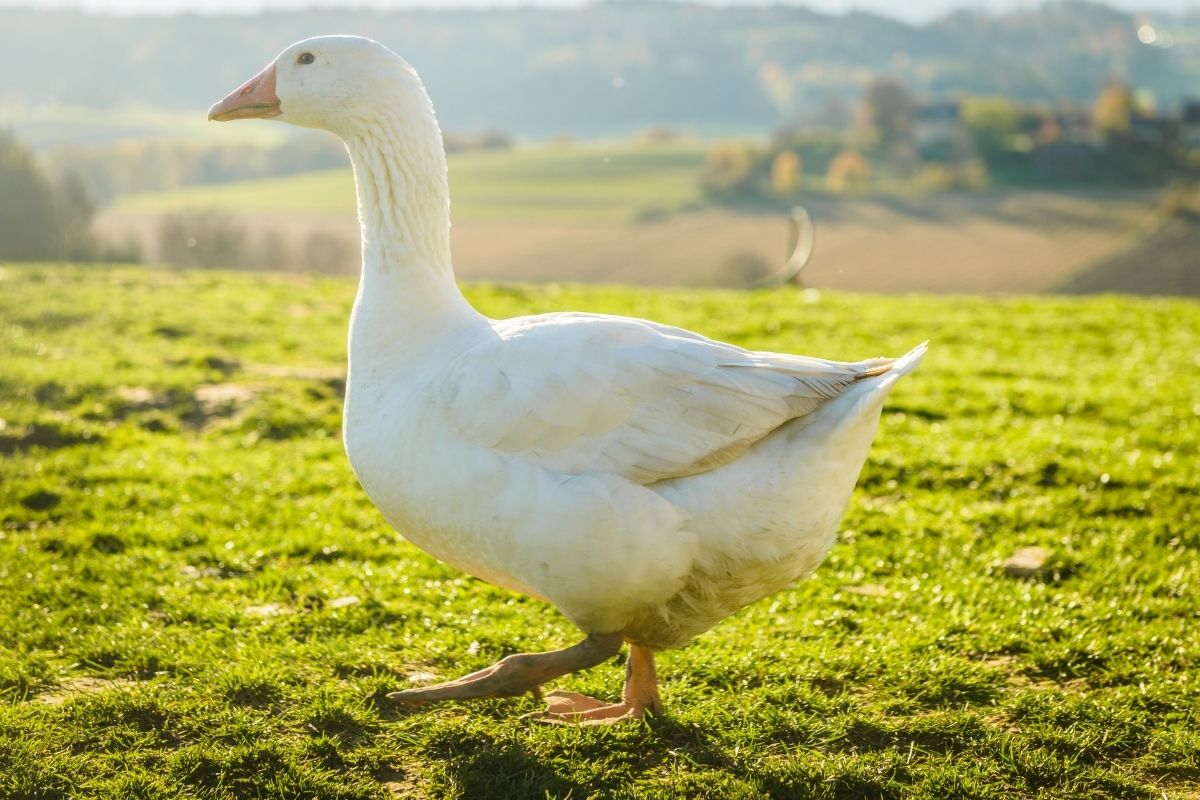 Backyard chickens have become popular over the last few years and more municipalities have allowed homes to have small flocks! Some folks have even gotten domestic geese and while these birds have a reputation for being mean, there are actually a few great reasons to add some to your backyard flock! And while geese can be messy and protective, they can also be fun, loyal, and easy to care for.

Geese can actually be friendly, affectionate, loyal, and intelligent! Some geese will even snuggle up to their owners and love being held. If raised by the same person from a gosling, a goose has a particularly good chance of being attached to someone. Breeds like African browns and American buffs are especially docile and people-orientated, but plenty of domestic geese breed that will bond with the people who raise them.

While geese can be friendly and affectionate, there’s a reason they have a bit of a bad rap. These birds can be territorial and protective of their flock, even if that group is a mix of species. Their loud honks often come instinctively and they will use it at any sign of a threat. Despite their protective nature and thunderous honk, geese aren’t much of a match for large predators so they can’t be the only protection for your birds.

It’s true that geese will visually imprint on their parents, as they don’t automatically know what species they are when they hatch and will identify with whatever species they first see on for life. For wild birds, particularly birds that can feed and move independently almost immediately after hatching, imprinting is a vital process to follow the right adult bird that provides safety. For birds in the wild, this is a vital process that helps give newly hatched birds the right skills to survive.

It’s entirely possible for some birds, including geese, to imprint on humans and while that may sound like a ton of fun, there can be some problems. Imprinting on a human can make it difficult for a goose to communicate with other birds, as vocalizations and postures are things that they learn from their parents and other birds. The odd behaviors that birds who imprinted on humans develop can often mean they’re not accepted by other birds. This is less of a problem for domestic birds or those cared for by humans. But for wild birds, this inability to communicate with their own species and a few other issues means they’re often unable to be released back into the wild.

Like other domestic birds, geese will need shelter to keep them safe at night and in extreme weather, food, and water. Unlike chickens, geese don’t need a place to roost and aren’t particularly nimble, meaning these birds need a safe, comfortable place on the floor of a coop to sleep and an easy way to get in and out. With delicate, webbed feet, geese often need a sturdy ramp if their coop is off the ground.

As waterfowl, these birds love swimming and need some water to both properly swallow their food and to help clear their nares (the holes in their beak that allow birds to breathe). So bowls of water deep enough for that to happen are important and a swimming pool or pond can be fun too. However, that love of water means things can and probably will get muddy.

It is possible to incubate goose eggs and have goslings hatch right at home but the process can be time and labor-intensive. If you decide to start off with goslings, you’ll still need to provide a brooder for the first few weeks of their life to help protect them, particularly since they don’t have enough feathers to help regulate their body temperatures. Like chicks, goslings will need formulated starter feed that provides them with the nutrients they need. Some folks have also added brewers yeast to their feed or water to supplement niacin, a much-needed nutrient for geese.

They’re Relatively Easy To Care For And Are Quite Useful

While the initial cost of getting geese can be a bit expensive, they are relatively inexpensive to care for during the rest of their lives. Geese aren’t as prone to accidents or illnesses as other domestic birds, which means that care for them can be fairly easy. There doesn’t seem to be an exact consensus on how much space these birds need but 6-10 square feet per bird in a coop seems to be a good range.

Geese are particularly fond of roaming around while eating grass and greens, making them great lawnmowers! With some wire fencing and stakes, you can create a pen to keep your geese in a particular part of your yard while they eat up grass and weeds and fertilizing it with their poop. Plus, while geese don’t lay eggs year-round like chickens do, these birds do lay some rather large and delicious eggs during part of the year.

Geese can indeed be pretty easy to care for and can be friendly, particularly with humans they’ve bonded with. But they can be very messy and protective at times, which means that there should be a lot of thought and preparation behind the decision to get geese. If you live in a city, geese might not be for you because there’s a good chance they’ll annoy your neighbors with their loud honks or try to attack something they perceive as a threat. But for those with some space and a little time, raising domestic geese can be a lot of fun!