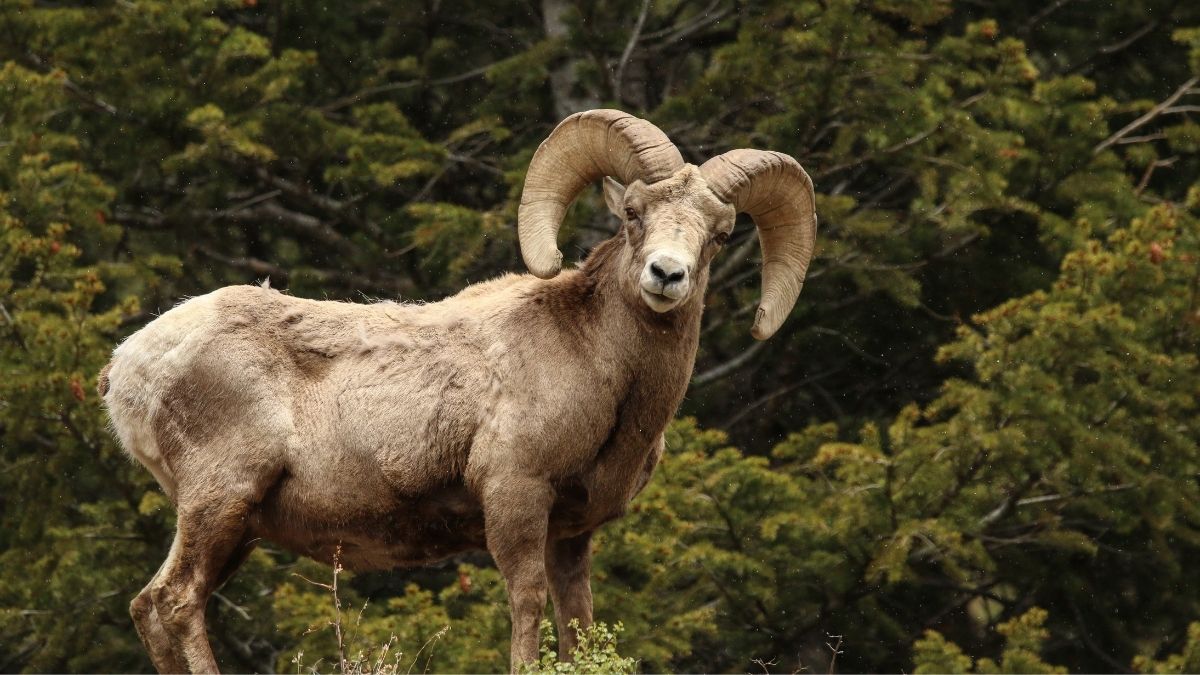 As the biggest wild sheep in North America, bighorn sheep have light brown coats, split hooves, and large horns that indicate their age. In the Pacific Northwest, the Rocky Mountain bighorn is one of two subspecies in the area and can be found in the Rocky Mountain range from British Columbia down to Arizona. The other subspecies is the California bighorn sheep, which can be found in the high desert terrain of central and southeastern Oregon. These sheep aren’t the only alpine ungulates in North America, as they do often share similar habitats with mountain goats. But there are plenty of differences between bighorn sheep and mountain goats, ranging from behavior to threats.

Bighorn sheep are compact, muscular animals that often weigh 160-250 pounds (but some males have been known to weigh more than 350 pounds) and stand 40 inches at the shoulder. Their coats are often a chocolate brown color that’s trimmed with white in certain spots and their horns can weigh up to 30 pounds. Both sexes have horns but only the males have large, curved ones that can grow to be over three feet long!

Because of the rocky terrain they call home, bighorn sheep have excellent eyesight that helps them jump from rock to rock and find the best footholds. Like some other ungulates, these sheep have hooves that are well designed for climbing the mountainous areas they live in. Their wide-set eyes also provide a wide arc of vision and with their keen hearing and sense of smell, these sheep are able to keep an eye out for predators.

Rocky Mountain bighorn sheep can often be found in alpine meadows, grassy mountain slopes, Canyonlands, and foothill country near rugged rocky bluffs. These sheep, like mountain goats, have adapted to steep, rocky areas as a safety mechanism against predators. In Washington state, there are 17 formal herds that are managed across central and eastern portions of the state. In Oregon, there are roughly 800 Rocky Mountain bighorn sheep that are found in the northeast corner of the state. In central and southeastern Oregon, on the other hand, there are an estimated 3,700 California bighorn sheep living in 32 different herds.

As opportunistic herbivores, these sheep primarily eat grasses, forbs, shrubs, and other vegetation depending on the habitat they’re in and the season. Because they are so dependent on eating what’s available nearby, bighorn sheep have a complex digestive process that allows them to ingest the maximum amount of nutrients from marginally nutritious plants. Like other ruminants, bighorn sheep have a four-part stomach that allows for them to rapidly eat large quantities before moving to a different area. This allows for the sheep to thoroughly rechew and digest their food while also traversing cliffs and ledges and getting away from predators.

Bighorn sheep, as you might imagine, are social animals and can sometimes be found in herds of over 100 (although, they’re more likely to be found in smaller herds). Bachelor herds made up of mature ram live apart from ewes (female sheep) and lambs (sheep less than a year old) for most of the year, with their breeding season as the most obvious exception to that. Rather than fight over territory, rams do get in head-to-head clashes over mating access to ewes but higher-ranking rams end up doing most of the breeding.

Like many other species, bighorn sheep face several threats to their United States and Canada populations. Historically, bighorn sheep reached near extinction by the early 20th century because of human encroachment. At the beginning of the 20th century, there were roughly 1.5-2 million bighorn sheep throughout the American West. Nowadays, there are only around 70,000 of these sheep in the western United States, with only 1,500 existing within Washington state.

In central Washington, entire herds have, unfortunately, been wiped out by disease. Bighorn sheep are evidently more susceptible to diseases compared to mountain goats and in the past, have caught illnesses like pneumonia from domestic sheep and goats (both domestic and wild). Unlike wild bighorn sheep, domestic sheep and goats carry the pneumonia bacteria with relatively minor effects to themselves. This bacteria was how the Washington bighorn sheep population managed to completely die out by the mid-1920s. There are no effective vaccines or treatments for bacterial pneumonia for bighorn sheep at the moment and complete separation of bighorn and domestic sheep has proven to be a difficult task for officials and land managers.

Bighorn sheep are iconic North American animals that are often found in alpine meadows, rocky mountain slopes, and other rugged terrains. There are a few different subspecies of bighorn sheep, at least two of which are found in different parts of the Pacific Northwest. The rams are easily identified by their curled horns that can get to be a couple feet in length and weigh up to 30 pounds. But with human encroachment bringing habitat loss, new diseases, and other threats, the survival of this species has been in flux since the mid 19th century. Having ecologically intact areas can have a major difference for bighorn sheep but being able to safely coexist with humans without the threat of pneumonia from domestic sheep could possibly be one of the best ways to help these animals.

Have you ever seen a bighorn sheep before? Let me know in the comments!

2 comments on “Bighorn Sheep of the Pacific Northwest”