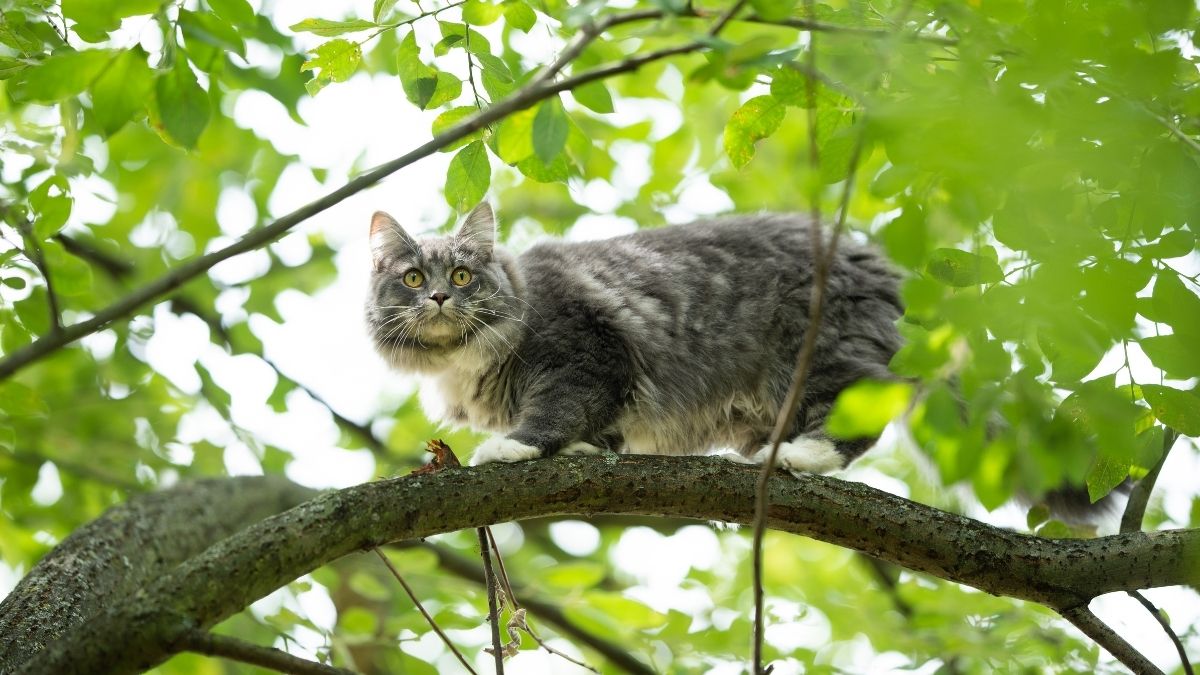 If you’ve ever had cats, you might know just how much they like being high up, even if there’s really no room for them. This behavior might be annoying at times, particularly when cats start to knock things over! But being up high is a perfectly natural thing for domestic cats for a few different reasons. While house cats have been domesticated for a few thousand years now, there are still some wild instincts left, including the need to be up high at times.

While domestic cats are often fed and kept safe by humans, house cats still have the biological instincts of a wild animal that is both prey and predator. Being up high, particularly spots near walls, feels safe for many cats and allows them to see everything without being seen. These vantage points are great for felines, as it offers them protection from predators like coyotes or eagles while also giving the cats the ability to see potential prey. These instincts and the ability to climb up high are evolutionary adaptions millennia in the making and while the domestication of cats has been thousands of years in the making, it’s going to be a long time before house cats start to lose some of that wild instinct.

Like the protection from predators, being up high offers cats a calm, safe spot away from other cats, other pets, and young children. For some cats, the chance to get away from others and just be alone can help avoid confrontation and fights. For homes with multiple cats, being in the highest spots can also be a bit of a status symbol and the cat with the best vantage point is considered to be the top cat (in more ways than one!). Having a variety of high points that cats can climb up can help prevent dominance-related fights.

Cats also like to climb, jump, and perch as a way to pass the time and burn off energy. Like many other living creatures, our feline friends need mental and physical stimulation and climbing up to high spots in the house can help with that! Having designated spots on top of the refrigerator or bookcase for your cat can help provide enrichment and prevent boredom. Cat trees/kitty condos, wall-mounted shelves, and stacks of boxes can also be great ways to provide multiple high spots.

Like kids at a playground or even folks at a rocking gym, climbing and racing all around is a great way for your cats to burn off some energy while also being mentally engaged. In fact, one gym in Japan fostered a cat named Lalah that eventually started rock climbing after watching gym members. In fact, there are even a few YouTube videos of Lalah showcasing her skills!

Safety is, of course, important and while cats are natural climbers, it’s important to do a few things to help keep them safe. You can invest in a cat tree, which provides a high spot for cats to climb up and often gives them a way to sharpen their claws without damaging the rest of your furniture. Having a variety of spots and heights for cats to jump up on or climb can also provide plenty of entertainment, particularly for senior or special needs cats.

For outdoor cats, there’s always the chance they could get stuck in a tree or other high spot. In many situations, cats are able to eventually find their way down, especially if they went up the tree to escape something and waited until it was safe. But in other situations, cats do need help. Going up something is much easier for cats, as their claws really help them go the way they’re pointed. Climbing up a tree, particularly to get a scared, stressed cat, can be dangerous if you were to slip so only climb after a cat if you’re physically able.

If you’re not able to climb up, the good news is that there are often folks who can help! Your local animal control officers or animal shelter might be able to help out or could have some ideas of how to get the cat down. In western Washington, there’s even a non-profit called Canopy Cat Rescue that helps rescue cats from trees! Canopy Cat is made up of arborists/cat lovers dedicated to helping cats and their people with their tree climbing skills.

While it can be frustrating to have your cats knock things off of high places, their climbing abilities are entirely natural. There are so many reasons why cats like to climb and be up high and by allowing them to continue these invaluable behaviors, you’re probably gaining a happier, less stressed cat.

Does your cat like to climb? Let me know in the comments!