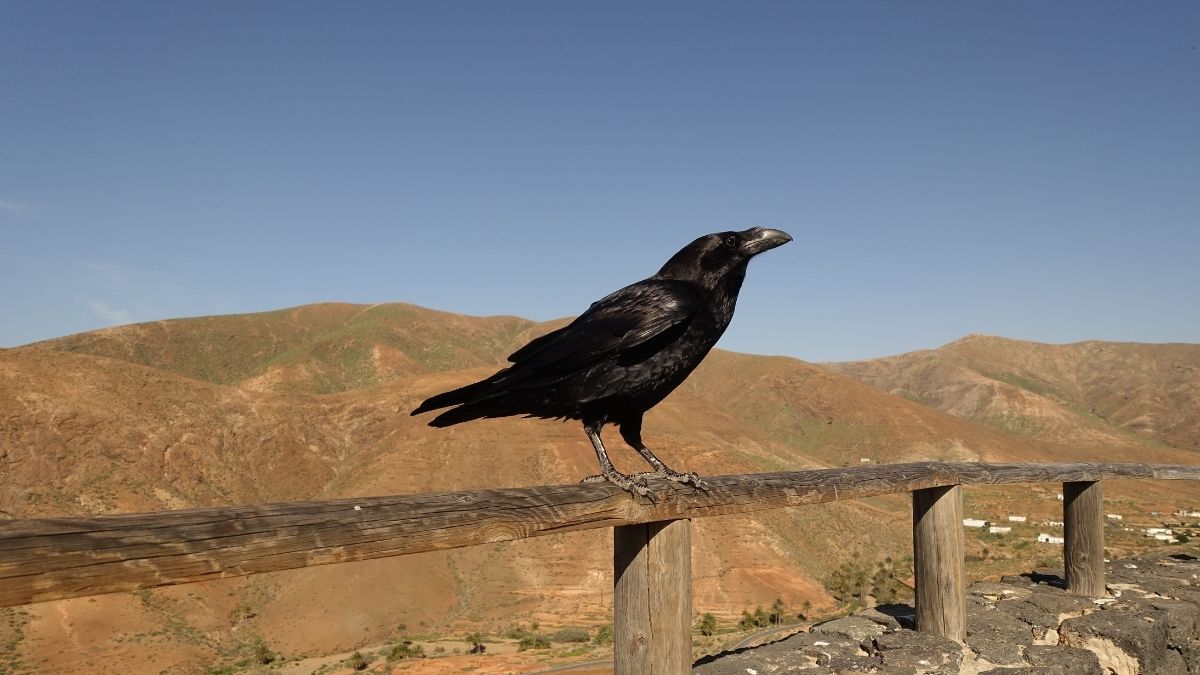 Found throughout North America in a range of ecosystems, American crows and common ravens are similarly-looking birds that are a part of the corvid family. These blackbirds do differ from each other in many ways, like their wingspan, beak curvature, and voice, but both birds are bold, playful, and clever. While these birds differ in roost numbers, they are both highly social and intelligent. In fact, many crows and ravens have been known to solve puzzles and mimic human speech.

Ravens are larger than crows, having an average wingspan of 3.5-4 feet and weighing around 2.5 pounds. These larger birds also have a heavier, curvier bill that has more feathers covering the nares and a tail that comes to a point, almost like a diamond or spade. A raven’s call is much deeper than a crow’s and sounds more like croaking than the familiar “caw-caw” of a crow. While both are found in the Pacific Northwest, ravens do tend to avoid populated urban centers and also tend to be found in smaller groups or in pairs.

Additionally, the feathers in a raven’s wing are more fanned out than crows and their wings tend to be more pointed as well. While both ravens and crows have an iridescent purple and blue in their feathers, ravens also have some sheen and green tint to their feathers as well. Ravens have also been known to glide and soar through the air while flying and tend to make more of a swishing sound with their wings. They’ve also been documented to somersault in flight!

It can be difficult to tell from a distance but American crows are smaller than the common raven. These smaller birds have a 2.5-foot wingspan and are often half the weight of ravens at an average of 1.25 pounds. The tails of a crow also tend to be fan-shaped and their wings are also blunter. A crow’s bill also tends to be slightly thinner with a more delicate shape to them.

Crows are probably one of the most common birds that people living in cities have seen and as highly social birds, they often mate for life and can live in roosts of a few dozen to tens of thousands. During the spring and summer, crows can be found in smaller family units with a defined territory so if you’ve seen a group of crows in or around your yard, odds are they’re a family. In fact, crows are such a social species, they’ve been known to hold a “funeral” of sorts for their dead.

The Intelligence and Sounds of Ravens and Crows

Scientists have found that crows and ravens have some fairly advanced cognitive abilities. They can, for example, actually tell individual people apart and will even hold grudges against people who’ve wronged them or leave gifts for people they like. Ravens will also ostrisize other ravens for cheating! Additionally, crows have some of the biggest brain-to-body ratios of birds and even have a higher density of neurons than many primates. While corvids don’t have a neocortex, the structure in some primate brains that’s thought to make advanced cognition possible, they do have densely pack clusters of neurons that allow for similar mental abilities.

Crows can also reason out cause and effect, understand water displacement, solve puzzles, and even fashion tools. It’s also been documented that ravens will use nonverbal signals and gestures to communicate with each other, something that scientists had only seen in primates before. This spectacular intelligence shown by crows and ravens is why there are so many myths and stories about them in different cultures around the world.

As far as sounds go, crows have their familiar “caw-caw” sound but also have a large range of other sounds like rattles, clicks, and bell-like notes. Ravens, as previously mentioned, have a deeper croaking sound that sounds closer to “gronk-gronk”. But both birds can also mimic human speech and other sounds! However, as Dr. John M Marzluff writes, “our words are arbitrary symbols” to corvids and these birds don’t seem to have a full understanding of what they’re saying when mimicing human words.

Once you get to know them more, crows and ravens are extraordinary birds and quite intelligent. Because both birds look so similar, it can take some time to be able to tell the difference between the two, especially from a distance. But up close, it can be easier to tell, particularly since ravens are often twice the size as crows and have different beaks and tails.

While ravens and crows are remarkable, it’s important to remember that they are wild animals and under US federal law, it’s illegal to keep a crow as a pet without a special permit. It also takes special training to care for and rehabilitate orphaned or injured birds like crows and ravens. By far the best way for anyone interested in handling these birds is to start volunteering or working with local rehabilitation organizations. Keeping these birds as pets take a lot of work and for the most part, it’s really not fair to the individual birds (particularly since crows are such social birds!).

What do you think of crows and ravens? Let me know in the comments!