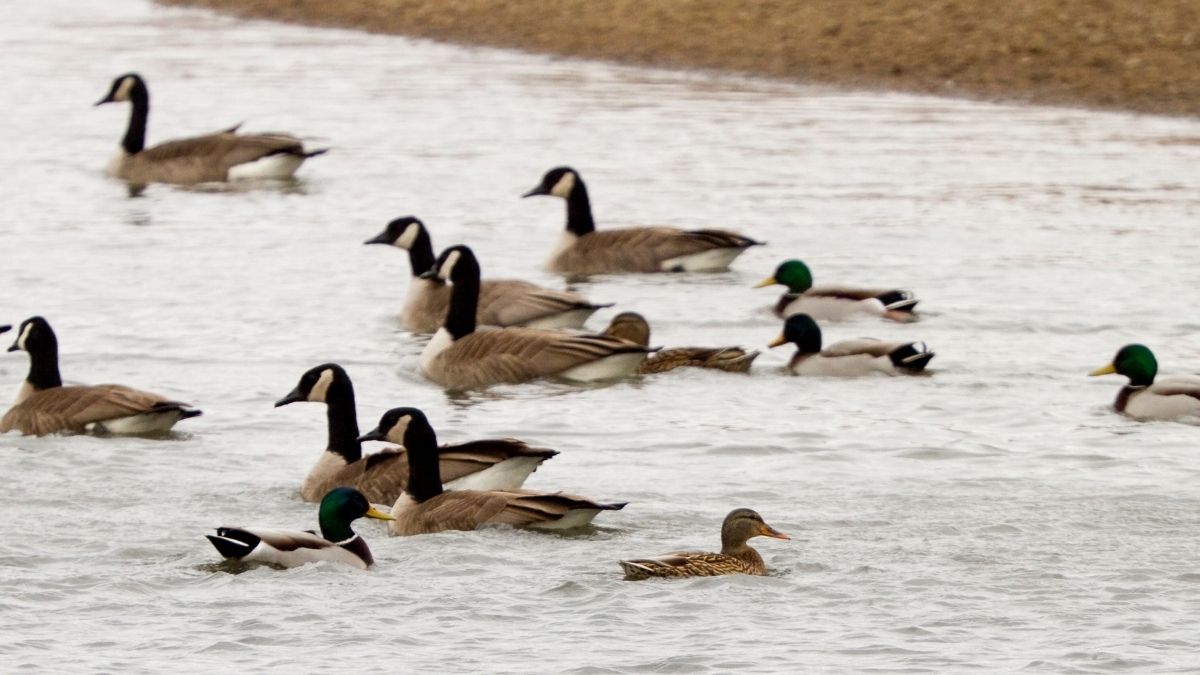 Domestic and wild waterfowl like ducks and geese are incredible birds that can be found almost all over the world. As waterfowl, both of these birds thrive around freshwater environments and are usually found around lakes, rivers, and waterfalls. The webbed feet of ducks and geese also allow them to be great swimmers! While these birds can look similar at times, there are plenty of differences between the two.

A primary difference between ducks and geese is their build and body size, particularly the number of bones in their necks. Ducks have 16 or fewer bones in their necks while geese generally have 17 to 24 neck bones, meaning their necks are longer than a duck’s. Geese are also larger in other ways, as they will often weigh 4-9 pounds in the wild and also have longer legs. Ducks are much smaller, with an average weight of 1-4 pounds. Geese also tend to lay less but have bigger eggs than ducks.

Both ducks and geese are well known for their sounds but these birds sound very different from each other. Geese honk and hiss quite loudly, with various goose breeds sounding slightly different. The honks actually sound different because the frequency is determined by the length of the goose’s neck! Ducks, on the other hand, will usually quack but have been known to make a variety of vocalizations, like chatters, coos, and squeaks.

Ducks and geese also have different diets, which is, in part, related to their bills! Geese are bigger than ducks but they do shorter, thicker bills while ducks have longer, flatter bills. Dabbling ducks, one of the three types of ducks, have round-tipped and flat bills with soft edges that allow these birds to search for food by touch. Geese have shorter bills that are better for grazing. The slight differences in diet allow for geese and ducks to coexist in the same ecosystems without competing with each other for food!

Geese are herbivores that will occasionally eat an insect or two and they will spend most of the day grazing. Grass is particularly great for domestic geese, as high-quality grass in the spring can provide all the vitamins and minerals that they need. Wild geese will eat aquatic plants, land grasses, berries on occasion, grains, and more. They will often eat more before they migrate and will also eat more carbohydrates (grains and berries) during autumn and winter to help them produce more heat to keep warm. While geese are herbivores, there are some plants that these birds can’t eat, like avocados, eggplant, rhubarb, onions, anything with caffeine, and white potatoes. But there are plenty of treats you can give domestic geese, like mealworms, watermelon, and dandelions.

These waterfowl make honking or hissing noises and they can be incredibly fierce and protective, particularly when in a flock. Domestic geese can actually get much bigger than their wild counterparts, with some domestic breeds even weighing 22 pounds (10kg)! Geese also tend to be monogamous and will often stay with their breeding partner for years at a time. Plus, both parents are involved in raising the babies once they’ve hatched!

Have you ever wondered why the plural of goose is geese but moose doesn’t turn into meese? There’s a reason for this – linguistics! Goose/geese are words in the English language with a germanic root, a system in which many words with that double ‘oo’ change to a double ‘ee’ when plural. Tooth/teeth, foot/feet, goose/geese are all examples of this! On the other hand, moose comes from a Native American Algonquin language and the word means ‘twig eater’.

Unlike geese, ducks are omnivores and in addition to eating land and aquatic plants, these birds also eat insects! For example, some domestic ducks love eating snails and they can be a great pest control system. Ducks love other insects like worms, spiders, and slugs, which can be a source of protein. However, too much protein can lead to an issue called angel wing, where the feathers turn downward.

Ducks can sometimes be a bit more flashy in color than geese, which tend to be white, grey, or black. Some duck species, like mallard ducks, have males with brightly colored heads with iridescent colors of blue and green. These bright colors tend to happen for some ducks during the winter and springtime as a way for the males to attract a mate And while these birds are also monogamous, they tend to only stay with a partner for a breeding season and the responsibility of baby care falls on female ducks.

Note: like any other wild animal, please don’t feed wild geese and ducks! Feeding these birds, even with the best intentions, can do more harm than good and bread products are particularly bad for waterfowl. Feeding wild birds can cause poor nutrition, water pollution, unnatural behavior, the spread of disease, and so much more. Plus, some wild birds have been known to become aggressive and a nuisance if they’re fed by humans too often.

Ducks and geese can, at times, look very similar and as members of the same family, these birds do have a few things in common! But there are so many differences between ducks and geese, particularly when it comes to size (including how long their necks are), diet, coloring, and sounds. Both ducks and geese can be great additions to any backyard flock but it can be just as fun to watch the wild versions of these birds out in the world.