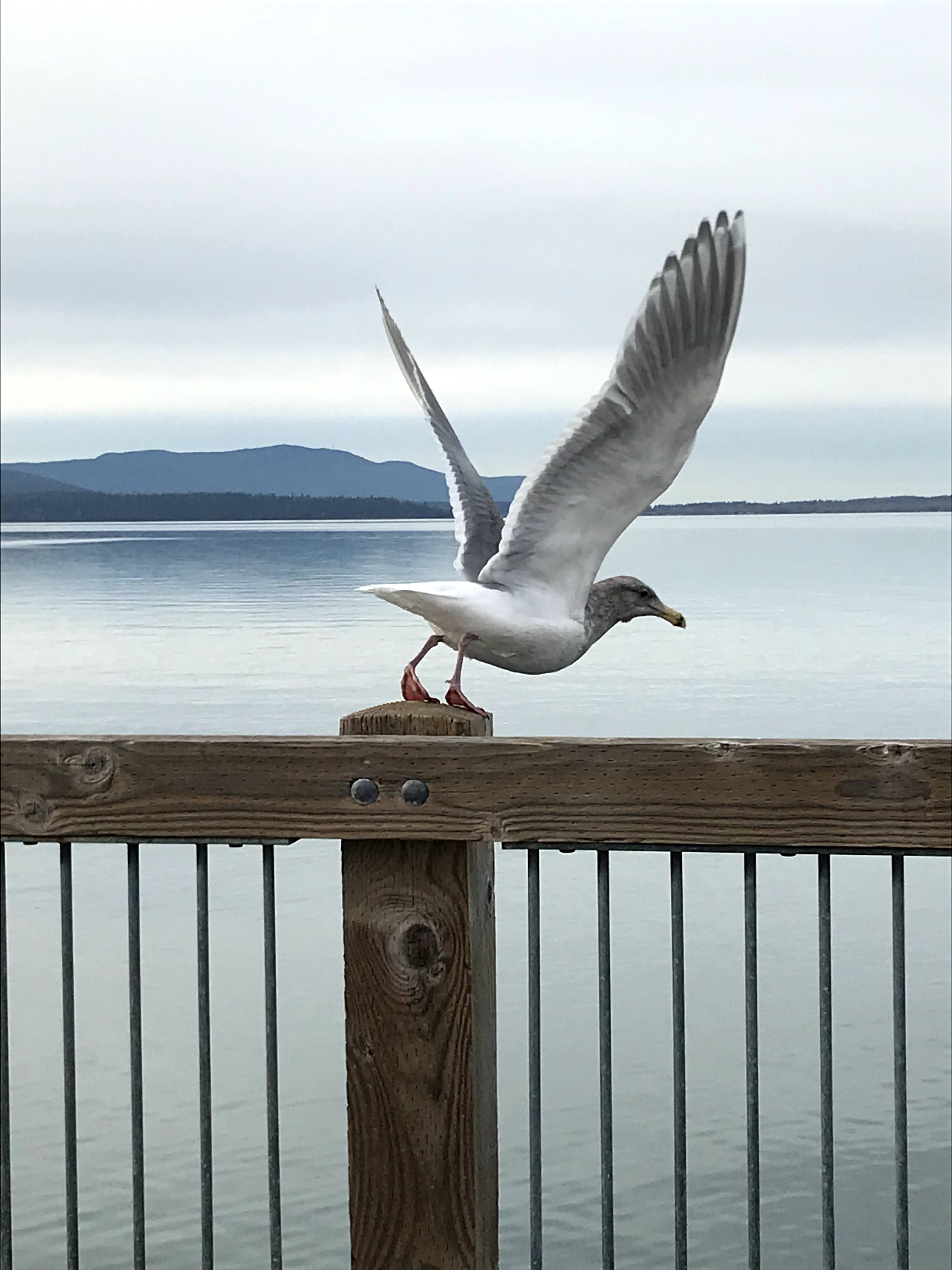 The birds commonly known as seagulls are rather notorious birds, particularly to those living along the coasts of North America. As opportunistic feeders, gulls have been known to eat a variety of things, like aquatic creatures, unattended bird eggs, garbage, and human food. There are more than fifty species of gulls around the world and a few can be found in the Pacific Northwest, including the Glaucous-winged, herring, and short-billed Gulls. These species have very similar characteristics, like large yellow bills with red spots, gray/black wings, and webbed feet, and it can be a bit difficult to tell the different species apart. Regardless of the specific type of gull, these birds are fascinating and incredibly adaptable birds.

These gulls are large, pale birds found in parts of the Pacific Northwest coastline year-round. Glaucous-winged gulls are notorious for hybridizing with other gull species, which only adds to the difficulty of telling the different gulls apart. However, they also lack the black coloration on their wingtips that other gulls have and as primarily coastal birds, they’re rarely found too far inland.

These gulls are the most common and familiar gull found in North America and are one of the few that can live both inland (particularly near large lake and major river systems) and along coastlines. In Washington state, the largest concentration of herring gulls can be found along the lower Columbia River near Vancouver, particularly during the smelt run in March.

The short-billed gull, once known as the mew gull, is the smallest of the white headed gulls and can be found on beaches and river estuaries. Along the west coast, their breeding regions are fairly confined to the far northwest and unlike other types of gulls, they tend to nest in trees.

While these birds do live in groups (which are called colonies) with an organized social structure, gulls can be particularly aggressive, territorial, and noisy. They do have a primarily fish-based diet but as omnivorous scavengers, seagulls will eat just about anything. In fact, they’ve been known to steal food straight out of people’s hands and can detect food from three miles away. Some gulls have even been seen swallowing small rabbits and others have been seen attacking right whales off the coast of Argentina.

Gulls can be quite vicious at times but there are so many really amazing things about these birds. Like other types of sea birds, many gull species are able to fly long distances and have been known to fly over open oceans for extended periods of time while looking for food. They’ve also developed the ability to drink salty ocean water when thirsty! There are special glands above a gull’s eyes that flush the salt out of their body through openings in their bills.

Like crows and ravens, gulls are clever and have a great memory. They’re able to pass on behaviors, can recognize people’s faces, and where food was hidden from a few days before. And like geese, gulls are also monogamous and will mate for life. Traditional nest sites for these birds often include sea cliffs, sand dunes, islands, and generally inaccessible areas. Many species have been known to repeatedly return to their original nest for years; some gulls have even shared the same nest for generations.

While it’s true that gulls of all kinds are adaptable birds and are often considered “least concern” by the ICUN, these types of birds still face threats, like the loss of habitats and suitable prey. Being omnivorous scavengers also means that these birds are literally digging through landfills and eating human garbage; like other seabirds, gulls have been eating and ingesting plastic and other types of debris. It’s to the point where scientists are finding deceased gulls with stomachs full of plastic, glass, metal, and even building material. So even though most gull species aren’t facing drastically low population levels, they still face threats and issues from human activity and inaction.

Between their annoying habit of stealing food and eating garbage, seagulls are a rather obvious reminder of the importance of coexisting with wildlife and dealing human caused problems like trash disposal and climate change. Their populations may not be decreasing right now but gulls are still dealing with the toxicity of pollution. As iconic sea birds, the Pacific Northwest and many other coastal areas wouldn’t be quite the same without these grey and white birds.

I actually took the photo at the top of this post back in January 2019! I remember taking it while walking Milo one day and I ended up really loving it. More two and a half years later, it’s still makes me happy to think of that walk because time with Milo always turned into something fun.