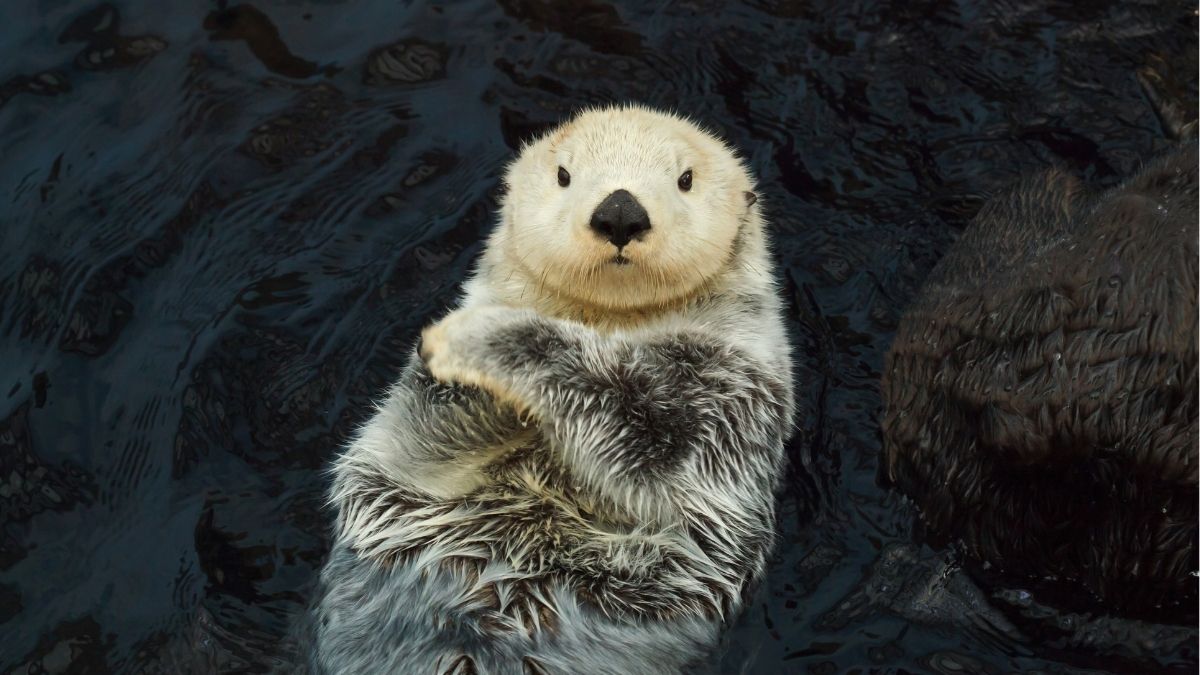 Sea otters can be found along the coastal areas of the North Pacific Ocean and range from the shores of Japan to the coast of Alaska and all along the coast of North America down to Baja, California. These cute and wonderful creatures have captured the love of many but because of numerous factors, they’re considered to be at a threatened conservation status.

These animals are incredibly important, as they’re a keystone species in the areas they live in and are often a good indicator of ocean health. National Geographic defines a keystone species as “an organism that helps to define an entire ecosystem” and for sea otters, that means helping to maintain the balance in the surrounding environment by eating sea urchins, crabs, and other invertebrates. When left undisturbed with no predators around, sea urchins tend to mow through kelp forests and will leave “urchin barrens” in the place of these foundational habitats. But with a sea otter population around, the urchin population stays in check, allowing for kelp forests to continue to grow.

Life as a Sea Otter

Sea otters belong to the weasel family, making these cute animals related to land animals like weasels, fishers, and minks. However, sea otters are the only member of the family to live almost exclusively in the ocean. Northern sea otters can be found in the cold waters along the coasts of Alaska, British Columbia, and Washington. Oregon, unfortunately, hasn’t had sea otters along its coast in over a century.

Despite living in the cold Pacific Ocean, sea otters are the only marine mammals that don’t have blubber to keep them warm. Instead, they make up for that with their incredibly thick fur coat and by eating a lot. They typically eat about 20-40% of their body weight every day to maintain their body temperature and their diet often consists of clams, mussels, crabs, mollusks, fish, and much more. They’re also apparently messy eaters! Some researchers have even seen hungry harlequin ducks trailing otters to pick up the pieces left behind. While sea otters are messy eaters, they do keep their coats meticulously clean, as a clean coat helps these mammals keep warm.

There are so many incredible things about sea otters. For example, sea otters are one of the only mammal species to use a tool when hunting and feeding! They often use a rock to help open up shellfish and have been known to use a rock to hammer abalone shells off rocks. Sea otters will even carry their rock in a little pouch between their chest and forearm. Sea otters can also spend their entire lives in the ocean and have been known to hold hands with other otters to stay together while sleeping.

There are a few factors in why sea otters are considered to be threatened. Historically, one of the biggest threats was wide-scale hunting, as the species was almost hunted to extinction for their pelts. The number of sea otters severely plummeted during that time, with their population going from an estimated 300,000 worldwide to around 2,000. Sea otters are currently protected by federal, state, and local laws and have been for decades now. That, combined with restoration effects, has allowed sea otter populations to grow up and down the west coast of the US and Canada. There have been a few successful programs but unfortunately, Oregon hasn’t had much luck. There’s even a project called “The Lost Sea Otters of Oregon” that explains more in-depth about the problem.

While hunting is no longer a huge issue for sea otters, there are other factors that contribute to the fact that this species is still endangered. A 2009 study, for example, showed that sea otters off the coast of Washington state were exposed to pathogens that have caused disease for other marine-mammal populations. Other scientists have found sea otters poisoned by a toxin called microcystin, which can appear in rivers and lakes from human sewage and fertilizer runoff. This toxin, which comes from cyanobacteria/blue-green algae, will often start in rivers or lakes before traveling downstream and into the ocean.

It’s not just human activity that causes problems, as it also turns out that domesticated cats pose an indirect hazard to sea otters and other wildlife. While domestic cats and sea otters don’t actually interact with one other, toxoplasma gondii is a parasite found in cat feces and can cause fatal infections in sea otters and other health effects in other marine mammals. A single infected cat can shed up to 100 million oocysts (egg-like structures) in its feces and studies from California estimate that cats in the United States deposit 1.2 million tons of poop into the environment every year. Similar to microcystin, Toxoplasma gondii oocysts can end up in the ocean through water runoff.

Toxoplasma gondii is usually asymptomatic in humans, although it can affect a fetus if you become infected while pregnant and serious complications might arise in those with compromised immune systems. If you do have a cat and would like to minimize the risk of this parasite for yourself and the life around you, there are a few things you can do:

Other threats to sea otters include major oil spills, limited food availability, habitat degradation, and conflicts with humans. Otters are particularly vulnerable to the effects of oil spills, more so than any other marine mammal, because of their reliance on their fur and the fact that they do spend prolonged periods of time floating and swimming on the sea surface, where oil tends to concentrate. Crude oil can rapidly penetrate an otter’s fur and eliminate the air layer trapped next to the skin; this air layer provides 70% of the insulating properties of a sea otter’s coat and without it, otters start to exhibit physiological and behavioral changes associated with hypothermia. And because sea otters spend so much time keeping their coats clean, they easily end up digesting an unhealthy amount of chemicals from the oil on their coats.

There are a few organizations that have been working on sea otter conservation, including the Monterey Bay Aquarium, Friends of the Sea Otter, Alaska SeaLife Center, and the Olympic Coast National Marine Sanctuary. You can even support the work of the Alaska SeaLife Center by “adopting” a northern sea otter; the Oregon Coast Aquarium has a similar program too. If you’d like to learn more about these cute and important animals, here are some great resources:

If you do find a sea otter, whether on a beach or out at sea, it’s important to remember that under the Marine Mammal Protection Act, it is illegal to touch a marine mammal like a sea otter without proper authorization. This is both for your safety and the otter’s safety as well, as these mammals can easily cause serious injuries to humans if handled incorrectly and are susceptible to diseases carried by humans and domestic animals. There are resources available for people who do find marine mammals they believe to be injured or abandoned. In Washington, the sea otter hotline is 1-877-326-8837. Wildlife rehabilitation centers that have been known to care for sea otters or can help in other ways in the Pacific Northwest, including:

In addition to being really cute, sea otters are a keystone species that help keep their ecosystems in balance. While their population drastically dwindled at the turn of the century, there are plenty of areas along the west coast that have seen a rebound in their numbers over the last few decades. It’s encouraging that their populations have been growing but sea otters still face numerous threats to their survival. Sea otters are vital to the health of coastal ecosystems and biodiversity, making their survival of utmost importance.

Have you ever seen a sea otter before? Let me know in the comments!