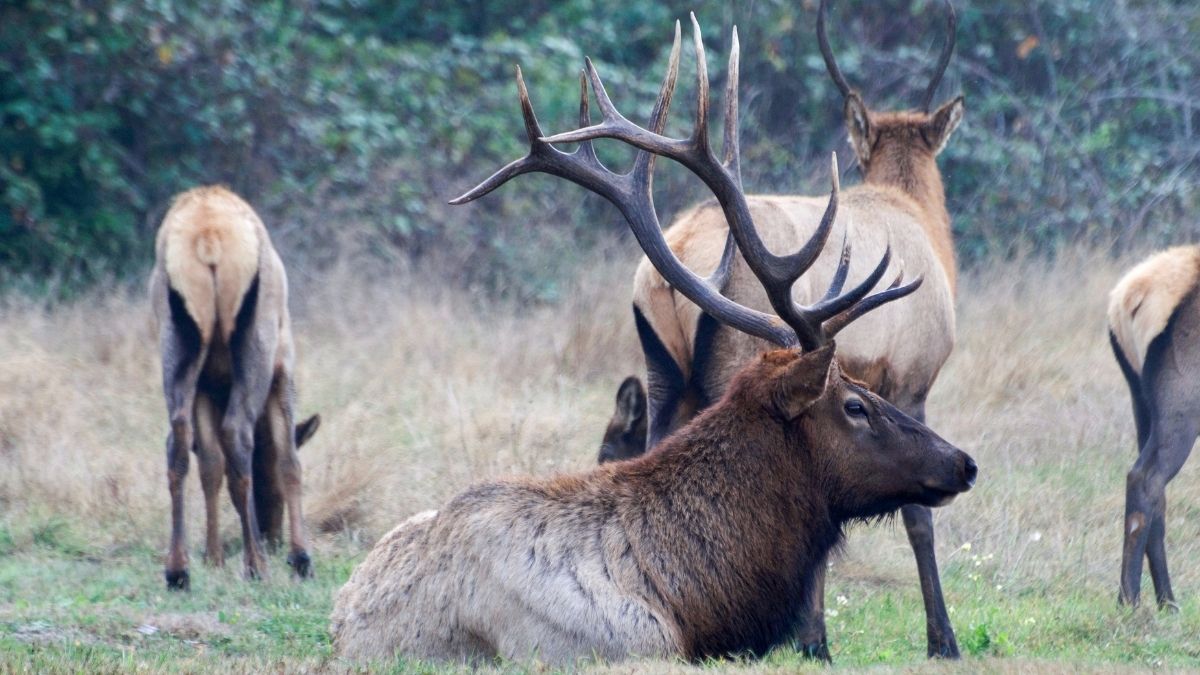 Elk are one of the largest species in the deer family; they are currently native to North America and eastern Asia but have been introduced to other parts of the world. In the Pacific Northwest, there are two elk subspecies: the Roosevelt elk and the Rocky Mountain elk. While these two types of elk look similar to both each other and their larger cousin, moose, there are plenty of differences.

Wapiti is just one of the many names indigenous American people had for elk. ‘Wapi’ meaning white in some Algonquian languages, possibly referring to some elk’s large white rump patch. There were, at one point, six different species of elk in North America but the Eastern Elk and Merriam’s Elk subspecies are now extinct. Extant species on the continent are the Manitoban Elk, Rocky Mountain Elk, Tule Elk, and Roosevelt’s Elk. Their historical range included most of the United States, the southern parts of Alberta and Saskatchewan, western Manitoba, and eastern British Columbia. Nowadays, most elk are found in the American West and around the Rocky Mountain range. As far as habitats go, elk live in a variety of different ecosystems, including rainforests, alpine meadows, dry desert valleys, and forests.

Elk are ruminants and seasonal migrators, with their diet and location changes depending on the season. During the spring and summer, elk mainly graze on grasses, sedges, ferns, and flowering plants. But in the fall and winter, they become browsers and feed on sprouts, branches (including conifers as a last resort), and grasses when available. Elk are an important part of the forest ecosystems because they help clear understory vegetation and that allows for other plant and animal species to thrive. But left unchecked, elk can have a tendency to disrupt their environment.

There are plenty of ways that elk communicate. Body language is important, of course, but so are their vocalizations, as they are some of the noisiest ungulates. Bugling, the bellow escalating to a squealing whistle heard in the video above, is used by bulls to attract mates, warn other bulls to stay away, or as an announcement that they are ready to fight. These sounds can especially be heard during the rut, the mating season for elk that happen in mid September for about a month. After mating season ends, there is a hormone decrease in bulls, which causes a weakening of the antler base. Eventually, the elk bulls do lose their antlers and begin to grow new ones in the spring.

As members of the deer family, elk bulls have large antlers that are primarily used as a defense, to display dominance, and in mating competitions. Antlers on elk are counted by the number of points they have and each one can have seven or eight points. They can also be four feet in length with a combined weight of 40 pounds each. While they are made of bone, antlers are some of the fastest growing animal tissue on the planet and can grow up to an inch a day! Every animal with antlers has a velvet phase, which is a velvet like ‘skin’ that covers the antlers and help the antlers grow by providing a blood supply to the bone. The velvet does dry up before breeding season and this drying process that usually starts around mid-August.

Named after President Theodore Roosevelt, this subspecies is the largest of the four left in North America. Weighing an average of 700-850 pounds (and sometimes much more) when fully grown, Roosevelt elk are native to the western slopes of the Coastal and Cascade ranges from southern British Columbia to northern California. These elk have also been introduced to Alaska and a bull weighing 1,300 pounds was even found in that state.

The largest unmanaged population of elk in the world can be found in Washington’s own Olympic National park, with a total of 5,000 elk living in the area. Teddy Roosevelt was actually the one to establish Olympic National Park (originally called Mount Olympus National Monument) in 1909, making the name for this elk subspecies particularly fitting. Like with any other wild animal, keeping your distance is important but you can often see Roosevelt elk in the Quinault Rainforest during the autumn. Elk are crepuscular animals, meaning they’re primarily active at dawn and dusk so the early and late parts of the day might be the best time.

The other subspecies of elk found in the Pacific Northwest is the Rocky Mountain Elk, which are primarily found in the eastern parts of Washington and Oregon. This subspecies is thought to be slightly smaller than Roosevelt elk, with an average weight of 500-700 pounds and height of 4.5-5 feet. Despite this smaller size, Rocky Mountain elk do have the largest antlers of the four elk subspecies. Most of the Rocky Mountain elk populations that now call Washington home are descendants of transplanted elk from Yellowstone National Park in the early 20th century.

Despite their seemingly similar looks, there are plenty of differences between these two deer species. As far as habitat range and behavior, moose are more common but they are also fairly solitary animals and are less likely to flee from humans. Moose are also primarily concentrated in Canada, Alaska, New England, Scandinavia, and a few other northern European regions while, as previously mentioned, elk are found in North America, particularly the American West.

Elk and moose also have several physical differences, particularly in size, color, and antler shape. Moose, for example, can be 6.5 feet tall at the shoulder; comparatively, elk are usually 5 feet tall at the shoulder and are a lot lighter in color. While the bulls of these species both have antlers, the antlers on a moose are large and flat and elk antlers are thin, elongate, and branched.

For elk in North America, there are and have been several threats to their populations. Prior to 1500, there were an estimated 10 million elk on the continent but that dwindled down to less than 100,000 in 1907. Between the 17th and 19th centuries, the eastern elk population was essentially wiped out because of overhunting or other issues. Elk was a favored wild game during that time and because they possess two ivory molars (remnants of the protruding tusks their ancestors once had), the elk that weren’t killed were left with the inability to chew food and thus, died. Forest mismanagement, habitat loss and fragmentation, climate change, and diseases like chronic Wasting Disease and elk hoof disease are all current threats to all North American elk subspecies.

Elk are incredible animals and some of the largest land mammals in North America. Nowadays, elk are mostly found in the American West and have been successfully transplanted in parts of Alaska. These animals can be seen in several US National Parks but with an average weight of 700 pounds and large antlers, elk can be dangerous when provoked and should be given plenty of space if seen in the wild. That also goes for elk calves that appear to be orphaned, as elk have been known to temporarily leave their calves in one spot to feed but do return for them. If you are concerned about an elk of any age, contact a nearby wildlife rehabilator or park ranger who has the proper training and experience to evaluate the situation.

Have you ever seen an elk before? Let me know in the comments!

0 comments on “Elk of the Pacific Northwest”