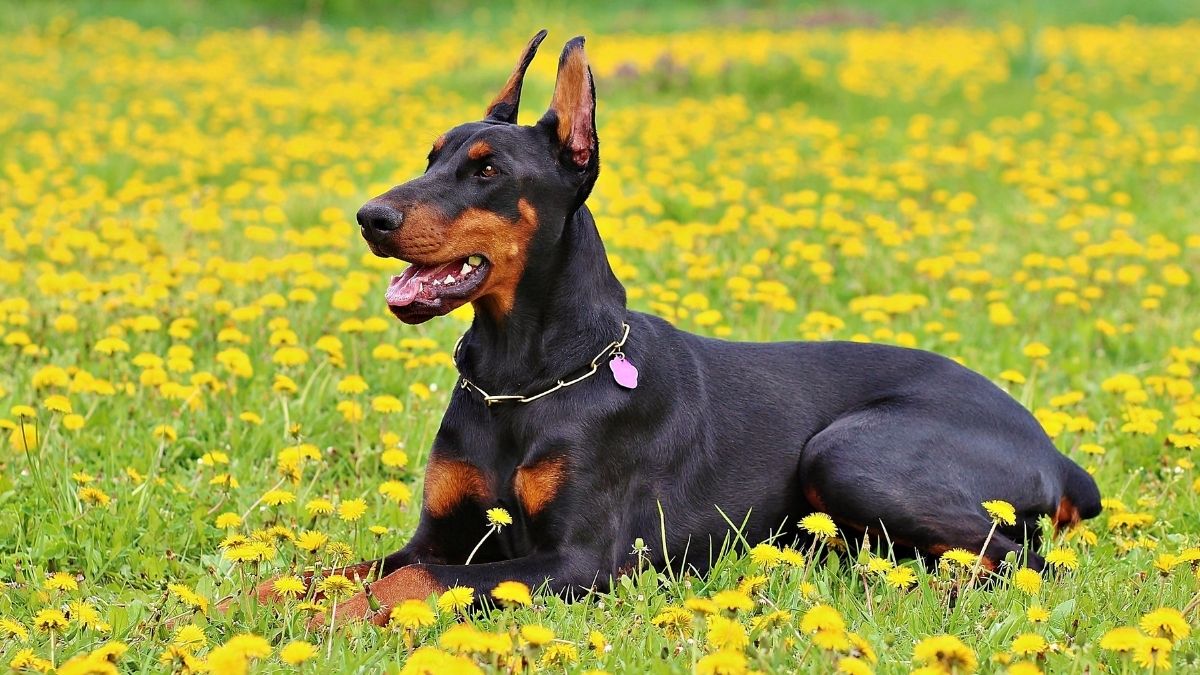 Doberman Pinchers, also known as Dobies, are fearless, loyal working dogs with sleek, muscular appearances. With a history in Germany, Dobermans have worked in a range of fields and even served as the US Marine Corps’ official war dog during World War II. Because of their tough looks and history with the military and law enforcement, this breed has a reputation for being a fierce guard dog but nowadays, Dobies can be incredibly gentle and love to be with their people.

Dobermans were originally developed in Germany in the late 19th century by a tax collector named Karl Friedrich Louis Dobermann and it’s presumed he created the Dobie by crossing breeds like German Pinschers, Rottweilers, Manchester Terriers, and Greyhounds together. Dobermann also worked part-time as a night watchman and dog catcher. The nature of all his work had him worried about his safety and so, Dobermann set out to create a dog breed that had the guts and drive to stand up to anything that challenged it. Eventually, Dobies became the formidable guard dog they’re known as today.

This breed is medium in size, with an average height of 24-28 inches at the shoulder and a weight of 65-99 pounds. While they’re not the biggest dogs on the block, they can be quite muscular, strong, and energetic so training and regular exercise are important. Dobies are also family dogs with short coats, meaning they’re not meant to spend all day, every day outside. They’re too sensitive to cold weather and develop strong bonds with their people, two things that make a solely outdoor life difficult for them.

While Dobermans can be stubborn, highly independent, and have a reputation for violence, they’re actually very nice and affectionate dogs that will only attack a person or another dog if specifically trained to do so, provoked, abused, or neglected. With plenty of love, positive reinforcement training, and fun activities, Dobies are wonderful dogs to have as companions and like any breed, do well in homes that understand canine body language and respect any boundaries a dog might have. Unfortunately, not everyone understands that and so, the breed might be listed in certain breed-specific legislation or dangerous dogs acts. These policies negatively impact breeds like Dobies and Pitbulls, are largely based on misinformation and stereotypes, and don’t make a difference when it comes to reducing dog bites.

This breed has traditionally had their tails docked and ears cropped, two practices that contribute to the breed’s iconic look. The ears that point upwards some Dobies have are that way because of ear cropping and their uncropped ears actually look more like that of a Labrador Retriever. However, both tail docking and ear cropping are elective surgeries for cosmetic purposes and are opposed by both the American Veterinary Medical Association and Canadian Veterinary Medical Association. Cropping their ears and docking their tails is, unfortunately, a part of the Doberman’s breed standard but continuing these practices solely for cosmetic reasons is unethical and unnecessary.

As far as care goes, Dobies have a short, smooth coat that needs very little grooming. Brushing once a week and the occasional bath (usually when they’re very dirty or smelly) should help keep their coats clean. Their coats is usually a combination of two colors and the most well-known colors for the breed are black and tan. If their ears aren’t cropped, they will need some attention but keeping their ears clean is relatively easy, especially if you make it a regular habit. And like other breeds, Dobermans also need regular nail trims, dental care, vet visits, exercise, and enrichment.

Despite their negative reputation, Doberman pinchers are actually a wonderful breed! Nowadays, Dobies are very affectionate and loving, especially with their families. They can be great guard dogs but aren’t meant for a strictly outdoor life like some other breeds. With plenty of exercise and training, this breed can be a wonderful companion and great addition to any family.

0 comments on “Behind the Breed: Doberman Pinscher”