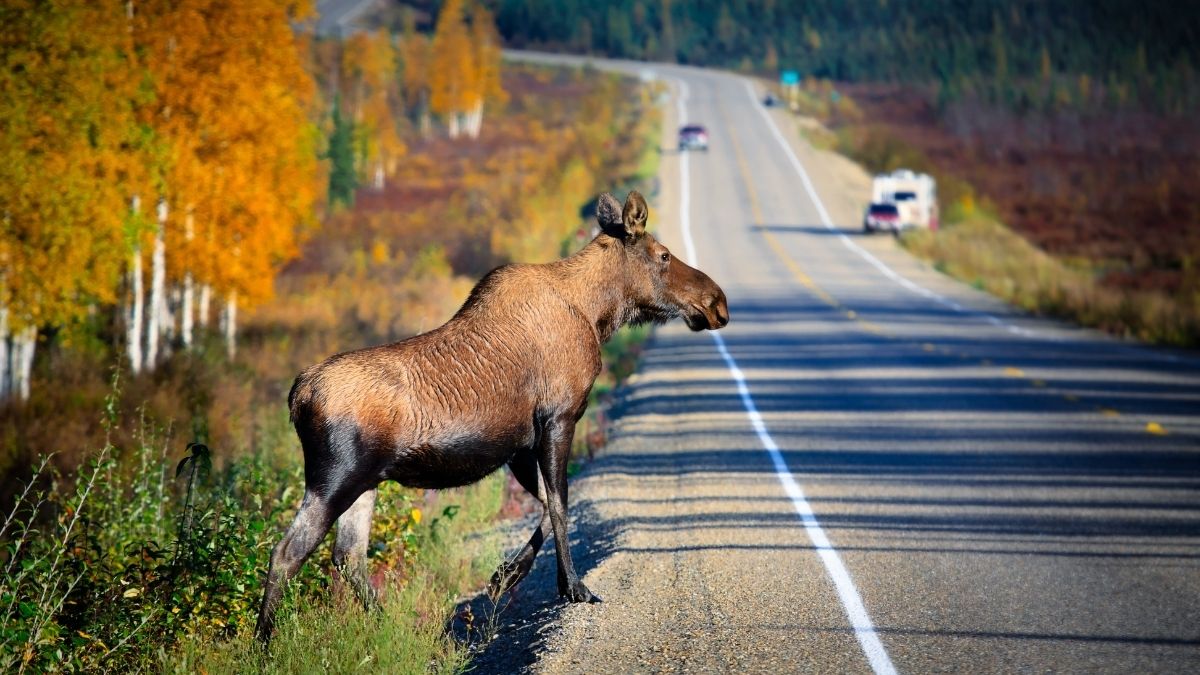 For centuries, urban development has created literal barriers to important ecosystems and segmented habitats for wildlife. This is particularly true since the start of the automotive industry and the creation of a large network of roads and highways, a trend that’s evident by the amount of roadkill that ends up on roads every year. Unfortunately, there are billions of miles of roads used all around the world and there are millions of animals that die on roadways after a collision with a motor vehicle of some kind. And here in the United States, there are more cars per capita than in any other nation.

In the US, vehicle collisions are the leading cause of death for vertebrates and more than a million animals die on roads every single day. This country is utterly car-dependent and our reliance on cars isn’t an accident, as greed and the fossil fuel industry have warped the way society has been built over the last century and a half. Public policies and infrastructure have made reliable and affordable mass transit nearly impossible in the United States and unlike Germany, Japan, or similar countries, there really isn’t a high-speed train system that could cut down on the number of cars on roads. But the negative impacts of roads on ecosystems and animals aren’t strictly a US problem, as it’s an issue all around the world. One projection from 2015 by the Brazilian Center for Studies in Road Ecology estimated that 475 million animals died in vehicle collisions just in Brazil.

Fatalities aren’t the only problem that highways cause, as many major roadways or other man-made structures have also cut up animal populations and habitats. That, in turn, has caused some populations to become isolated and unable to migrate in the same way they have for millennia. For some species, that isolation leads to inbreeding and a decrease in genetic variability, two things that can lead to localized extinction. Road crossings at rivers and streams and dams have also posed barriers to fish movements, something that’s of particular concern for salmon in the Pacific Northwest. In fact, the Skokimish River has been known to flood nearby roads after a good rainfall, which results in some chum salmon furiously swimming across roads in shallow water.

But there is a solution to the problems posed by cars, roads, and highways: wildlife crossings. Over and underpasses can help significantly reduce the number of collisions between cars and animals and have been popular in Europe since the 1950s. In some areas that already have wildlife crossings, like Canada’s Banff National Park, there has been an 80-90% decrease in animal-driver collisions. Not only does that significant cut in collisions helping the local and migrating animals in the area, but it also means fewer damaged cars and people that are injured or killed in collisions.

For the last two decades, there have been efforts to reconnect the north and south Cascades in Washington by establishing safe wildlife crossings over and under I-90. Interstate 90 is an incredibly important highway in the state and crosses over Snoqualmie pass, making it one of the busiest mountain pass highways in the entire country. As a transcontinental interstate, I-90 runs from Seattle to Boston but in Washington, it is the only interstate highway to connect the eastern and western parts of the state. Because of that (and the fact that it also intersects with several other major state highways), I-90 is very busy and depending on the exact area, can easily see more than 120,000 cars on it every day.

The Cascades Conservation Partnership and Conservation Northwest are just some of the organizations that worked on the I-90 Wildlife Corridor Campaign, I-90 Wildlife Watch, and other related programs for years. And the campaign was very successful, leading to a now finished twin arched crossing on the I-190 Snoqualmie Pass East, a few tunnels going under the highway, and several more structures (including one more giant overpass) slated for construction. The very first I-90 wildlife bridge wasn’t even officially finished before some animals started using it!

The I-90 Wildlife Crossing might be one of the biggest wildlife crossing projects in the region but it’s hardly the only one, as there are many different projects that hope to accomplish the same goals all over the world. The different types of wildlife crossings, like overpasses and underpasses, are also important because they allow for a variety of different species to utilize them.

In the United States, there are several different wildlife corridor projects that help to connect natural areas. The Wildlife Crossing at Liberty Canyon in California, Burnham Wildlife Corridor in Chicago, the Washington dam removals, and the recently completed wildlife crossing project in Jackson Hole, Wyoming are just some examples. And wildlife crossings don’t just cross over roads and highways, as there is a proposal to repurpose an already existing bridge over the Mississippi River into a wildlife crossing. And it’s not just the United States! The Banff National Park in Alberta, Canada has a very successful wildlife crossing program that has been used as an example for other projects and in the last 25 years, there have been six wildlife overpasses and 38 underpasses built in that area.

Wildlife corridors and wildlife crossings are very similar projects that work towards the same goal of providing a safe passage for animals and access to natural migration paths. Man-made wildlife crossings, like the ones discussed above, are incredibly important for providing safe passage over highways. But unlike crossings, wildlife and ecological corridors typically don’t seem to center around man-made structures and are actually routes built into the landscape. Both corridors and crossings are important in allowing access to habitats that animals might not be able to access because of human activity.

These areas don’t just benefit mammals, as plants have also been proven to benefit from wildlife corridors. Seed dispersal is improved with these natural connections between habitats, as seeds can move to different areas by hitching a ride in an animal’s fur or dispersed in their stool. Monarch butterflies and birds have also been negatively impacted by roads and other structures but the Burnham Wildlife Corridor in Chicago is one example of a wildlife corridor built with a specific focus on migrating birds and butterflies.

While these projects often have expensive price tags, the investments have proven to be worth it for the finished or nearly finished ones and there have been benefits for animals and humans alike. In addition to preventing the deaths of wild animals and people, fewer collisions also mean less damage to cars, trucks, and the freeways themselves. Some estimates suggest that wildlife collisions on roads and highways can cost eight billion dollars and the average cost of hitting an animal like a deer, elk, or moose can range from $4,000 to $30,000. Costs in these types of accidents aren’t just vehicle damage, as other factors also include tows and hospital bills, and may not even be covered by your insurance.

There are plenty of benefits to wildlife corridors and crossings, as coordinated connectivity between habitats can save localized species, individual lives (both animals and humans), promote biodiversity, and despite the initial investment, they can also ultimately help people and governments save a lot of money. With an ever-changing world and ongoing threat of climate change, any sort of investment in the environment like wildlife coordiors and crossings can be a step forward in the right direction.

Have you seen or been to a wildlife crossing or cooridor? Let me know in the comments!

0 comments on “Wildlife Corridors and Crossings”