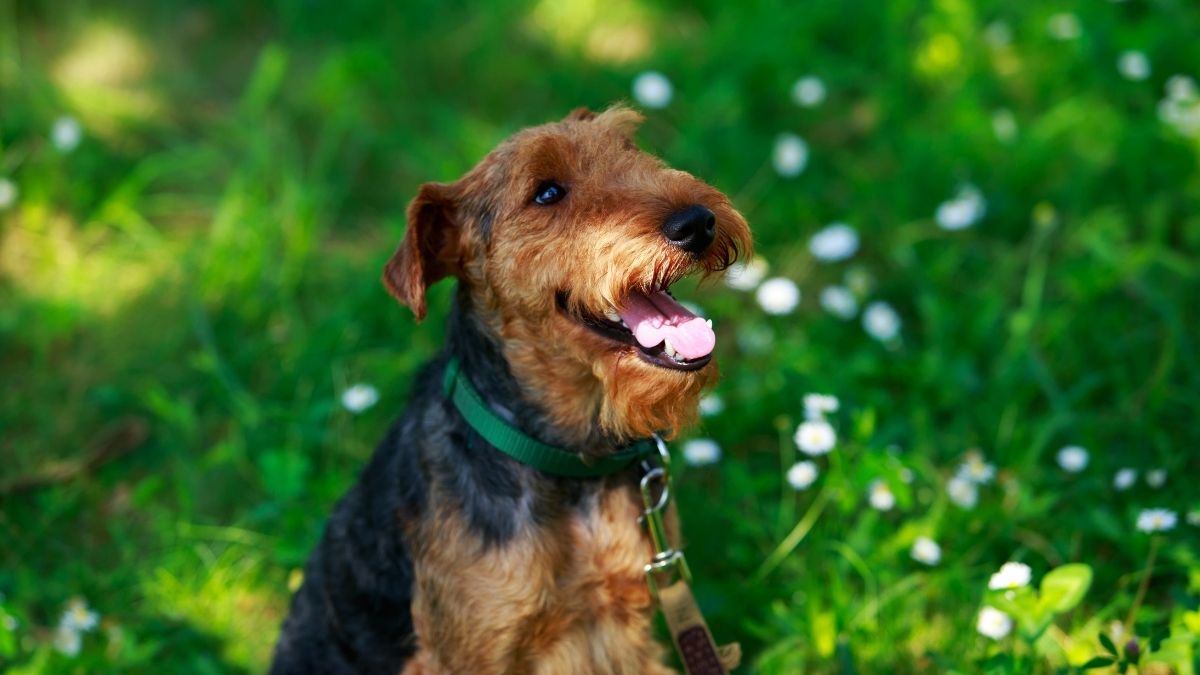 These black and tan dogs are true to their terrier name and are spunky dogs full of character. Welsh terriers were originally bred to chase and trap small animals for hunters and still remain the active, fun-loving dog that made them so great as hunting companions. While these terriers are great for an active home (as they will definitely need an outlet for their energy!), they do have some negative traits, like a high prey drive, a desire to dig, and an assertive personality. Training, exercise, and socialization are all important for Welsh Terriers!

Welsh Terriers, also known as Welshies, have a history that goes back centuries, with one possible reference dating back as early as 1450! The breed’s name refers, of course, to Wales but these dogs have a long history in all of Britain and were once categorized as an Old English Terrier. While there are some references to a black and tan terrier in Britain for thousands of years, it wasn’t until 1885 that the Kennel Club of England officially classified them as Welsh Terriers. Fans of Welsh Terriers have included JFK, who owned one named Charlie, Kin Edward VIII of Britain, and Clement Attlee, one of the UK’s Prime Ministers.

Welshies were, as mentioned, bred to hunt down small game and kill vermin, like rodents, foxes, otters, and badgers. They’ve held jobs working in fox hunt dog packs, keeping pests at bay on farms, and working as hunting companions. This history means that Welsh Terriers are intelligent, active, intelligent, and assertive, as they were often let off leash to run and hunt down small game. They’re creative and stubborn dogs that often understand a command but tend to make their own decisions, which may counter what the owner just said. And like other terriers, barking and digging are two common Welshie traits.

In addition to their temperament, this breed’s size has helped them with hunting small game. Welshies usually stand 14-15 inches tall at the shoulder and weigh up for 20 pounds, making them great for. Even with their smaller size and ability to get along with children and people, a Welsh Terrier’s strong personality and desire to not back down from a challenge means they can sometimes be a handful without constant positive reinforcement training. Sports like agility and obedience, walks, running along while you bike, and other activities are all great ways to work on training while also having a fun time with your Welshie! Plus, these activities are wonderful ways for these dogs to exert some of their mischievous energy. If left alone or without proper outlets, a Welsh Terrier can easily cause some damage as a way to channel that energy.

Like any other breed, these dogs do need regular care like nail trims, teetch brushing, and vet visits. Welsh Terriers can be prone to health issues like allergies, glaucoma, and primary lens luxation, a progressive eye issue that could lead to blindness. As far as shedding goes, these dogs have a relatively low maintenance coat and don’t tend to shed as much as other breeds. Even so, their short coats still need regular grooming; a weekly brushing plus the occasional trim should keep a Welshie’s coat healthy and untangled. While no dog is truly hypoallergenic, Welshies are one of the few dog breeds that some folks with dog allergies can tolerant being around for extended periods of time.

Ultimately, Welsh Terriers are wonderful dogs but they can be a bit of a handful, particularly for novice owners. These dogs are energetic, bold, and a tad stubborn, all classic terrier traits. While they do bark and dig more than other dogs, Welshies do really well on hikes, in dog sports, and other activities. They do have a high prey drive, which means they may not have a great recall and should be kept on a leash until that command is learned (if it’s ever learned!). If you’re looking for a smaller, very active dog and aren’t afraid of a challenge, a Welsh Terrier might just be the dog for you!

0 comments on “Behind the Breed: Welsh Terriers”