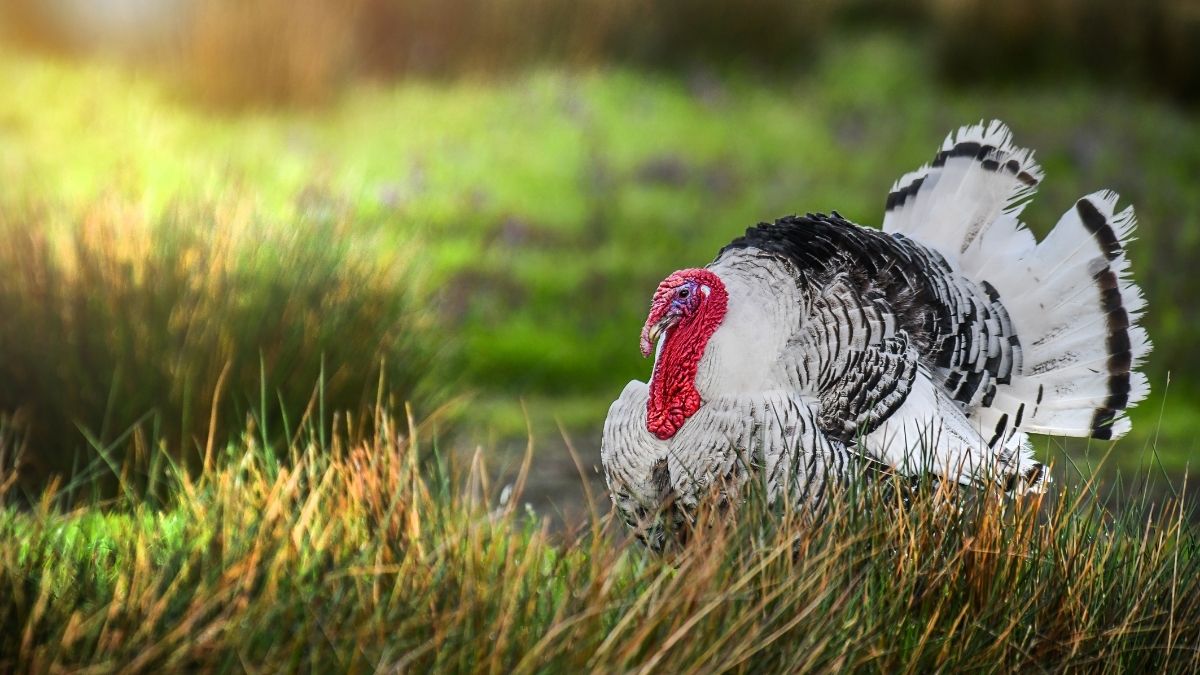 Turkeys and Thanksgiving have been synonymous for quite a while now, with the story of the holiday claiming that the bird was eaten at the first Thanksgiving meal (although, the history of the holiday is definitely not the one you learned in school!). Nowadays, millions of domestic turkeys are the center of Thanksgiving meals but did you know there are several turkey varieties/breeds? The American Poultry Association recognizes eight varieties in its own Standard and these birds come in a range of colors.

Current domesticated turkeys are descendants of wild turkeys native to North America. These birds belong to the Galliforms order, which includes other heavy, ground-feeding birds like grouse and pheasants. Turkeys, like other farm birds, were domesticated for meat and egg consumption and that process of domestication means that wild turkeys and domestic turkeys don’t share too much in common. Wild turkeys, for example, are smaller, quieter birds with darker, firmer meat that has a more intense flavor. The domesticate turkeys that exist today are often louder and bigger.

Unless explicitly labeled otherwise, most store-bought turkeys are broad-breasted, a type of turkey that the modern agricultural turkey industry has spent a significant amount of time developing to grow as large as possible in a short amount of time. Broad-breasted turkeys are either white or bronze/brown and depending on what their feed and how long they’re kept alive, these birds can have a weight of 7-50 pounds. The name ‘broad-breasted’ comes from the fact that these turkeys carry more than 70% of their weight in their breasts.

The other type of domestic turkey is a heritage turkey; these birds are much less common than their larger counterparts and are also more expensive per pound. There are several criteria that a turkey must meet to be considered a heritage turkey: the result of naturally mating pairs of grandparents and parents, a long and productive lifespan (3-7 years), and a slow to moderate growth rate. Like some other domestic farm birds (think chickens and geese!), heritage turkeys love to forage for food and can make great additions to a natural pest control solution.

This breed is actually a close descendant to the Eastern Wild turkey, the most common subspecies of wild turkey found in the United States. Bronze turkeys are strong, hardy birds that are usually raised for their meat and when fully grown, they weigh 16-25 pounds. They do particularly well with free ranging and have a very friendly temperament, making them great additions to a hobby farm or homestead.

This turkey definitely lives up to its name, as they are white and fairly small for a turkey! Some have even mistaken Midget Whites for chickens due to their size, as these birds usually weigh 10-18 pounds. That may be big for a chicken but small compared to other turkey breeds! Initally developed in Massachusetts in the 1960s, Midget Whites are now considered rare, with one estimate suggesting there are maybe 200 left. Despite that, these birds do actually make great pets because of their friendly disposition. The hens are also naturally broody and will even raise their own young.

Royal Palm turkeys originated from a flock of turkeys in 1920s Florida and was added to the APA’s Standard of Perfection in 1951. This variety isn’t usually used in commercial meat production, as they are too small and are considered an ornamental and exhibition variety. Fully grown, Royal Palm turkeys weigh 12-20 pounds, making them slightly bigger than Midget Whites. While they may not be great for large commercial farm, these beautiful birds can be great additions to a homestead. In addition to being relatively friendly, they are particularly great for insect control and can lay roughly 100 eggs in a year.

There are plenty of other turkey breeds that currently exist and each one has their own traits and needs. While plenty of these birds have a wonderful personality and can make great additions to a small homestead, they aren’t for everyone so anyone considering getting a turkey should do plenty of research before bringing them home. Turkeys can, for example, be a bit more curious than chickens and can sometimes get stuck in a tight spot while investigating something! Ultimately, turkeys are an investment like any other animal and should be treated with kindness. The decision to get a turkey or two (or more!) is definitely one that should be done impulsively.

Have you ever had turkeys before? Or even met one in person? Let me know in the comments!

0 comments on “Behind the Breed: Domestic Turkey Breeds”