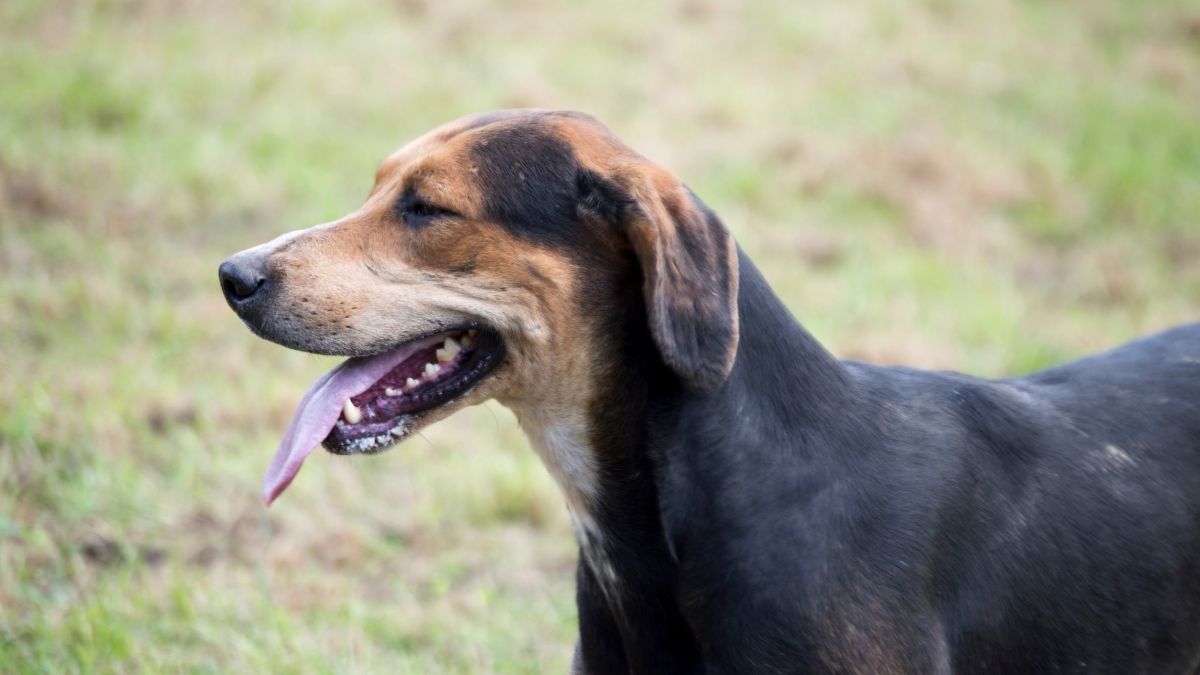 English Foxhounds are a fairly rare breed nowadays, ranking near the bottom of the American Kennel Club’s popular breed list (188 out of 197!). But despite that, these hounds have a long history as hunting dogs and they’re medium in size, standing 23-27 inches at the shoulder and weighing 55-75 pounds. Because of their history, English Foxhounds definitely need a very active home willing to give them something to do if kept as companion dogs. They’d likely do well in homes with people who are home a lot and that had other dogs, as they love being in a pack and can get destructive if not exercised or entertained enough.

This breed has a fairly long history, with careful pedigrees dating back to the late 18th century. As the name implies, English Foxhounds originate in England as hounds for fox hunts, with the classic English fox hunt involving hounds and men on horseback developing roughly a century before the English Foxhound breed. These dogs are one of four foxhound breeds and are scent hounds, meaning they can follow even the faintest smell to find something and rely on their superior sense of smell to track down foxes and other small game.

English foxhounds aren’t really meant for a relaxed apartment life in the city because like other hounds, they thrive with a job to do or in an active home and can be fairly vocal by barking or baying at various times. As mentioned, they can get destructive if bored and left alone for long periods of time, making them not ideal for people who work long hours. And their baying may annoy neighbors if you live in an apartment complex. But for an active person who can at least partly work from home, these foxhounds do make great running or hiking companions, as they’re often able to run for miles and have plenty of energy to burn. Like any other dog, English Foxhound puppies shouldn’t go on intense, long hikes or runs until fully grown so that their growth plates are able to safely develop. They will also eventually slow down as they get older.

More often than not, these dogs do need to be on a leash while out and about because their high prey drive can make a solid recall difficult. Even with that, English Foxhounds are easy to train in other areas, as they’re smart and eager to work in a team setting. While they’re intelligent and happy to work with others, training these dogs still takes work but positive reinforcement-based training, consistency, and patience can all make a difference.

As far as grooming goes, English Foxhounds have a short, dense, double coat that’s relatively easy to care for. Their coats are often (but not always) tri-colored with white, tan, and black as the main colors. Solid color English Foxhounds do happen and some also have flecks of gray or yellow as well. They do shed a moderate amount but weekly brushing with a mitt or rubber brush can help keep the shedding under control. Occasional baths are fine for this breed. Like any other breed, regular nail trimming, dental care, and ear cleaning are all important for English Foxhounds.

Ultimately, English Foxhounds are friendly, energetic dogs that would love to be a part of an active pack! Those with long work hours or those living in apartments or larger cities might want to reconsider getting an English Foxhound. These dogs would thrive in an active home that has a fully fenced yard, a regular exercise schedule, training, and enrichment activities. Without those things, English Foxhounds tend to get bored and destructive. If you’re looking for a hiking or jogging partner, this breed would be a great option, as they often have the energy to keep up for long periods of time!

Have you ever had an English Foxhound? Let me know about them in the comments!

0 comments on “Behind the Breed: English Foxhound”