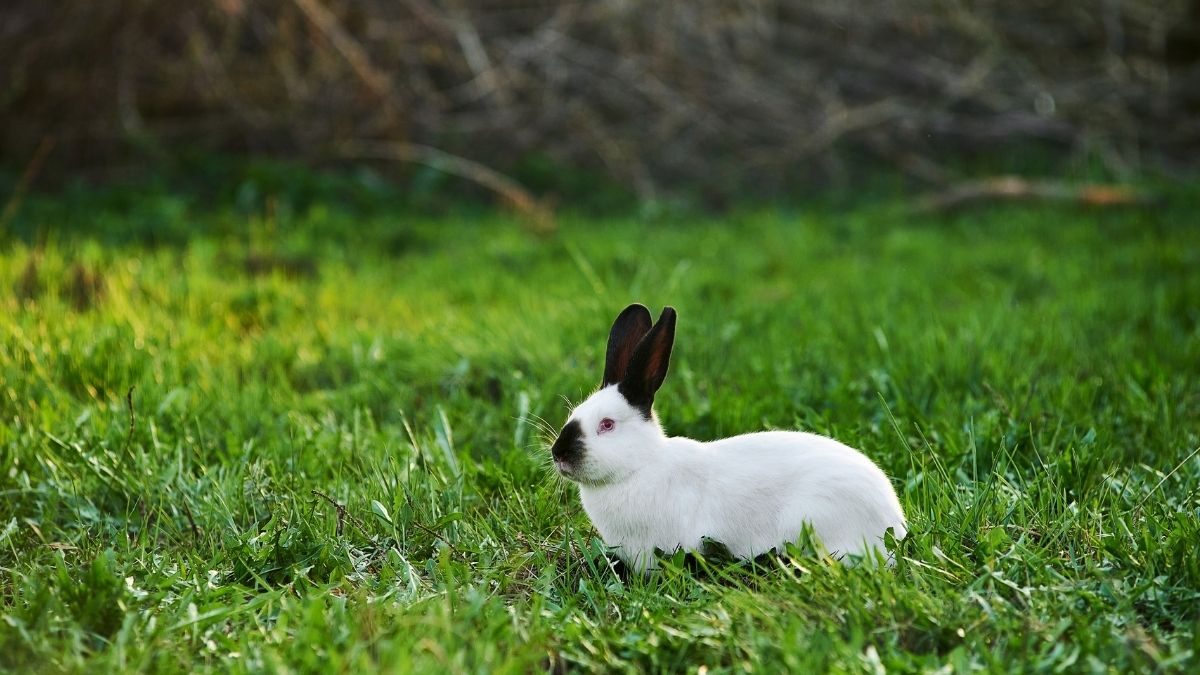 When I was a kid, my family went on road trips all over the Pacific Northwest during spring and summer breaks. There was always one place we’d stop for lunch if we were in the area; talking with my sister and some Googling revealed this place to be The Eatery at Glacier Peak Resort near Marblemount, WA. This place had a ton of rabbits around and I remember being a kid and trying to catch one. As an adult, I realize that it wasn’t great to do that, given how stressful for the rabbits it must have been, and how incredibly unusual it is to have that many all in one area. Some, I’m sure now, were domestic rabbits released into the wild and just stayed in the grassy areas near the restaurant and cabins.

Unfortunately, there are too many stories of pet rabbits being released into the wild. Domestic rabbits are the third most popular pet in the US (after cats and dogs) and they’re also the third most abandoned. Easter is a particularly bad time for domestic rabbits, as the holiday is well associated with the species and too many people get a cute little baby rabbit on an impulse without knowing what it takes to care for a rabbit. And sadly, too many rabbits end up at rescues or abandoned in the wild.

There are both domesticated and wild types of rabbits and while there don’t seem to be any genetic differences between the two, there are plenty of differences that allow wild rabbits to survive better in the wild. Wild and domestic rabbits may be genetically similar but the genetic regulations between the two are very different. Essentially, the breeding of domestic rabbits has changed the way their brain functions and they don’t have the same instincts that their wild counterparts do. Wild rabbits, for example, have a very strong flight response, a vital trait to have when hunted by predators like foxes, coyotes, and others. They also have better coats for living out in the wild, ones that typically allow for better camouflage. Some domestic rabbits have these amazing coats but some aren’t particularly great for hiding from threats out in the wild.

There are, unfortunately, too many stories of uncontrolled rabbit populations in different parts of the Pacific Northwest. San Juan Island, a 55-mile square island off the coast of northwest Washington, once has an estimated 1 million domestic rabbit population after a failed breeding operation released a few thousand rabbits into the wild in 1934. Cannon Beach has also dealt with an uncontrolled feral rabbit population back in 2018 and it seems like a problem that continues, as no state or federal agency has responsibility for these animals (and a cull isn’t particularly good PR for a city that relies heavily on tourism).

The Legality and Ethics of Releasing Domestic Rabbits in the Wild

Releasing a domestic rabbit into the wild is not a good idea nor it is even legal in many places. Many municipalities, counties, and other legal jurisdictions consider releasing a domestic rabbit into the wild an animal cruelty offense and misdemeanor but the exact laws and what someone can be charged with depends on where you live. Unfortunately, animal cruelty laws are often subjective and vague. That combined with the difficulty of actually catching someone in the act can make things difficult for animal control officers.

There’s also the ethical considerations of releasing a domestic rabbit and other pets into the wild. When abandoned in such a way, many pet rabbits aren’t able to fend for themselves and end up suffering before tragically dying. While wild rabbits face the same obstacles (predators, diseases, fatal human conflict) that pet rabbits may face, they are often far better equipped to live in the wild. Domestic rabbits, as previously mentioned, don’t have the right instincts for living out in the wild, making them easy targets for predators or being hit by cars. Their coats can also be the wrong color and aren’t made for extreme weather conditions. In high temperatures with no shelter or access to water (and no idea how to find either), pet rabbits can easily get heat stroke and suffer an agonizing death.

Having an uncontrolled domestic rabbit population out in the wild can also cause problems for people, wild rabbits, and the environment. The large feral population on San Juan Island between 1934-1979, for example, caused some serious problems for the island’s agriculture by eating crops and digging burrows in the fields. Along with other introduced/invasive species, domestic rabbits out in the wild have also been known to survive much to the detriment of native species. This is because released/introduced pets can compete with wild animals for resources and, depending on the species, have been known to eat wildlife (something that isn’t an issue for pet rabbits but is for other animals).

Domestic (both pet and feral) rabbits have also been known to spread diseases among colonies and a prime example of that actually happened here in the Pacific Northwest in the last few years. Several domestic rabbits in Washington and British Columbia tested positive for rabbit hemorrhagic disease (RHD), a highly contagious viral disease that has a high infection and death rate in domestic rabbits, back in 2019. These cases weren’t the first or only time that RHD was a problem for rabbits in the Pacific Northwest. The largest RHD outbreak in North America happened in early 2018 in British Columbia and a large number of feral rabbits in Nanaimo perished from the disease.

There are some truly amazing people and organizations working to provide a better life for all domestic rabbits in the Pacific Northwest by educating the public, operating rescues and adoption centers, and hosting spay and neuter events. The following list is not an exhaustive one but some rescues and shelters that accept rabbits or work with domestic rabbits include:

*Has a focus on elderly or special needs bunnies.

**Not limited to rabbits but will generally accept them.

Ultimately, there are a few possibilities of what could happen to a pet rabbit that’s released into the wild. One, it could suffer a slow, agonizing death related to malnutrition from not being able to forage for its food. It could also be snatched up by a predator, hit by a car, or a number of other fairly terrible demises. Two, even if the pet rabbit survives, there are plenty of ecological damages to having feral rabbits around. They can spread diseases, eat crops and dig burrows in fields, and compete for resources with wild rabbits.

If you decide you want a pet rabbit, that’s wonderful! These animals are wonderful companions and can be so much fun. But they also take time, resources, and money so they definitely shouldn’t be an impulse decision! Situations and circumstances do change and if you find yourself unable to care for a rabbit, do not release it into the wild. Instead, surrender them to a shelter or rescue so the rabbit can be rehomed.

1 comment on “What Happens to Domestic Rabbits That Are Released Into The Wild?”