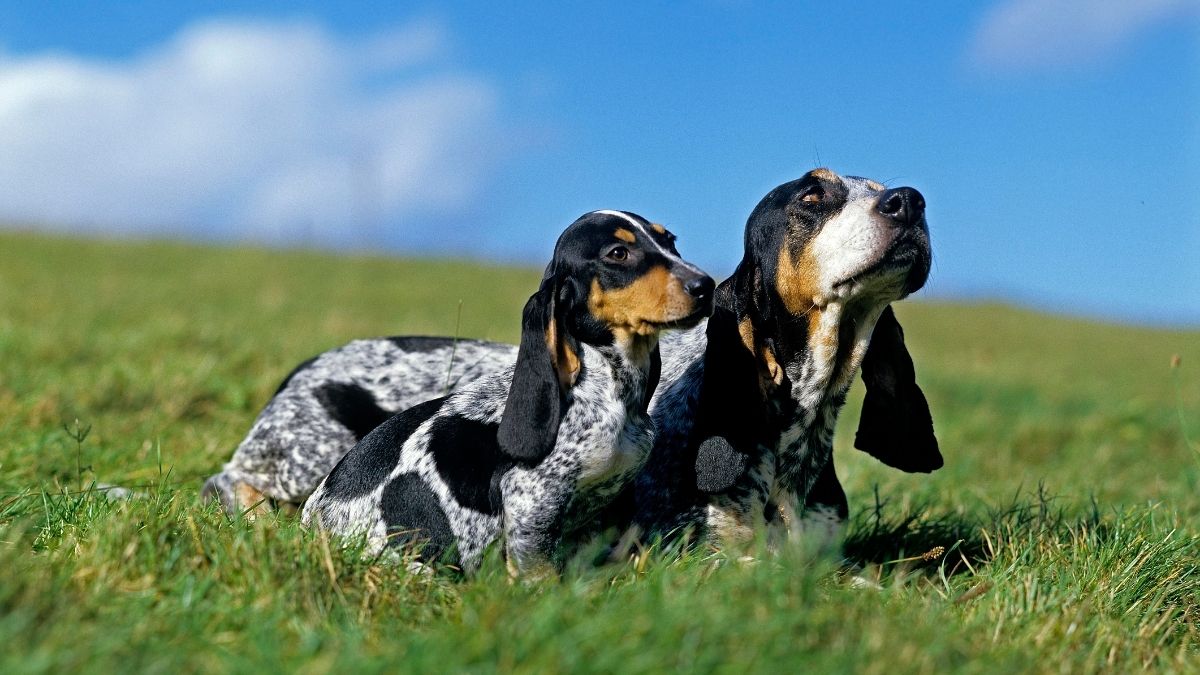 Also known as the Blue Gascony Basset, the Basset Blue de Gascogne is a small scent hound that is rarely seen outside its native France. While recognized by the United Kennel Club in the United States and by the Fédération Cynologique Internationale in Belgium, this breed is not recognized by the American Kennel Club and the fact that there are very few of these dogs in the US might be the cause of that. Despite their rarity, Blue Gasconys can be wonderful companions for those wanting a hound in their lives. They can be independent, loving, loud, eager to please, and so much more!

If you mixed a Basset Hound, a Dachshund, and an Australian Cattle dog altogether, you might get a dog that looks like a Blue Gascony. As a sort of cousin to the Basset Hound (and one of the six types of bassets), this wonderful breed also loves to hunt, has a low-slung body, and bays with a deep baritone. The Blue Gascony dates back to 14th century Gascony, a region in southwest France, and while it looks like a combination of a few different breeds, it was actually bred down from the Grand Bleu de Gascogne. Unlike some hounds that were bred to help hunters on horseback, the Blue Gascony was bred to help hunters that were on foot.

Because of that history of being a hunting companion, Blue Gasconys do need a surprising amount of exercise every day and an hour of activity can help burn off some of their energy. Like other hounds, they’re fun, eager to please, and love to be around their people. But that same hound personality that makes them so wonderful also means they’re fairly independent and love to follow their noses, which can make training a bit difficult but still doable. Blue Gasconys also have that hound deep bay vocalization that they love to use and can get destructive if left alone for long periods of time. Because of that, they’re not great apartment dogs or for people who work long hours.

This breed’s name refers to both the region in France where it’s from, its dense coat, and its body type. The Blue Gascony is slightly taller than other assets at 13-15 inches tall but they still sit fairly low to the ground with short, thick legs and a very long back. They have a short, hardy coat that appears slate blue in color thanks to a black and white mottled pattern. Grooming is relatively easy and weekly brushing with a slicker brush can help. While easy, grooming is still important and baths may be more common than other breeds (at most, once or twice a month), as Blue Gasconys can get a bit stinky because of their skin’s high oil production. With their long, floppy ears, regular ear cleaning is also important to prevent infections from setting in.

There are a few health issues that these dogs can be prone to, like arthritis, gastric dilatation, intervertebral disc disease, otitis external (ear infections), and patellar luxation. Like any dog with a long body and swayed back and short legs, care should be taken to prevent Blue Gasconys from spending too much time jumping up or doing activities that might result in back or spinal injuries. Back pain in dogs can be the result of many different things, like an injury, arthritis, or intervertebral disc disease. A diagnosis, treatment plan, and possible prevention will depend on the root cause of the issue and severity of the issue but regular vet care and relative caution in some situations can help!

The Basset Bleu de Gascogne is very rare outside its native France, meaning most folks have probably never met one before. Despite its rarity, the breed is recognized by both the United Kennel Club in the United States and by the Fédération Cynologique Internationale in Belgium. Blue Gasconys are incredible dogs but like many other hounds, they are not for everybody!

Have you ever met a Basset Bleu de Gascogne before? Let me know in the comments!

0 comments on “Behind the Breed: Basset Bleu de Gascogne”