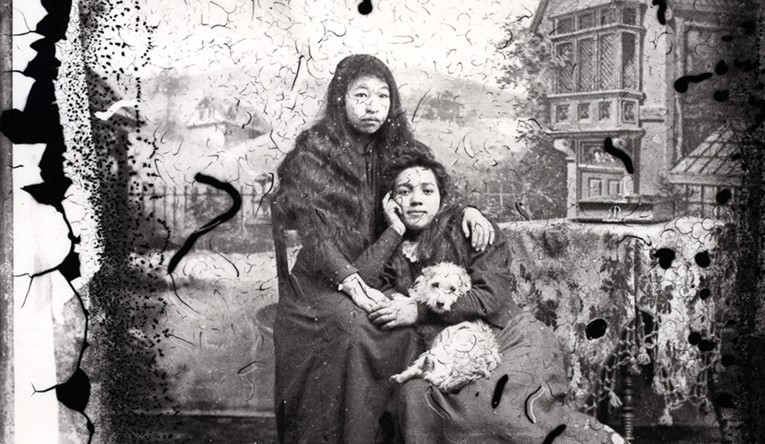 In the ‘Behind the Breed’ for Labrador Retrievers, I mentioned that labs came from a now extinct St. Johns Dog. The St. Johns Dog isn’t the first nor is it the only dog breed to go extinct. Over time, breeds of dogs have shifted and changed, which has meant that there have been more than a few breeds to go extinct. One such breed that lived in the northwest was the Salish Wool Dog!

History of the Salish Wool Dog

These dogs lived with Coast Salish Nations in what is now Washington and British Columbia and were an important part of daily life in the area. They were described as small, long-haired dogs with a thick, usually white coat, ears that stood up, curled tail, and fox-like face. The Salish Wool Dog was developed and lived along indigenous peoples for thousands of years before European contact; the oldest remains were from 4,000 years ago and were found in the Puget Sound and Strait of Georgia.

Salish Wool Dogs were kept separate from other dog breeds so that Coast Salish peoples could maintain the breed and keep the strong coats. Many of these dogs would live in packs of 20-30 and were fed a diet of fish (particularly salmon) and elk tallow. In order to keep these dogs separate from others, they often lived on relatively isolated islands in the San Juans and around Vancouver Island or in gated caverns.

At least once a year (and maybe even three times a year!), Salish Wool Dogs were sheared by Coast Salish peoples, much like sheep have and continue to be sheared today. Coast Salish people often used sharp stones or knives made of mussel shells to shear the dogs. The explorer Captain George Vancouver once reported that the coat from Salish Wool Dogs was so thick once sheared that you could pick up a corner and the whole fleece would hold together!

These dogs and their fleece were highly prized within the Coast Salish communities, as there aren’t any native sheep and gathering the fleece from wild mountain goats in the Northern Cascades is a rather treacherous but not impossible endeavor. Because mountain goats were never really domesticated in the area, gathering wool from these animals was difficult and never amounted to enough for a full blanket.

However, the Salish Wool Dogs allowed for the Coast Salish Peoples to have easily accessible wool for textiles and blankets before sheep (and sheep wool) were imported by European settlers around 1862. Many people would mix in other fibers (like fleece from mountain goats and plant fibers) to make the wool from the dogs last longer.

During the early summer of 2017, it was discovered that a Coast Salish blanket from the late 19th century actually had some wooly dog hair from the Salish Wool Dog. Not much is known about the blanket’s history, as records just refer to it as ‘Coast Salish blanket’.

However, we do know that the blanket was owned by Judge James Wickersham, who lived in Tacoma around the end of the 19th century and collected Native objects. Wickersham eventually moved to Alaska, where he died in 1939. His collection of Native objects were given to a tourist shop in the area but luckily, a customer realized the value of some of the objects. The blanket eventually found its way back to Washington state in 1974 and currently resides at the Burke Museum in Seattle.

There is speculation around why so few blankets made from Salish Wool Dog hair still exist today. Some theorize that the dog hair was so common and thus, used for less important blankets. In turn, those blankets were used more and deteriorated much faster. However, many others indicate that these blankets were actually quite valuable and held in high esteem.

As mentioned, the Salish Wool Dog breed is currently extinct and has been for more than 115 years now,. These dogs were incredibly important and highly valued in Coast Salish societies but because of European contact and colonialism, the indigenous peoples and the breed populations both declined.

Additionally, machine-made blankets spun out of sheep wool started to be traded at fur trading posts in the 19th century and these blankets were inexpensive and easier to make compared to blankets made from the dog hair. Because of all those factors (and more), Salish Wool Dogs eventually started to interbreed with other dogs and over time, the uniqueness of the breed (including their long coats) was lost. The last known descendants of the breed passed away in 1940 but the breed was officially understood to be extinct decades before that.

While the Salish Wool Dog is sadly extinct, there is still so much we can learn about the dog! The history of this breed shines a light on the everyday life of Coast Salish Peoples and its extinction is a reminder of how our actions (particularly those with the most power in society) can have an impact on the animals and ecosystems around us.

4 comments on “Behind the Breed: Salish Wool Dog”