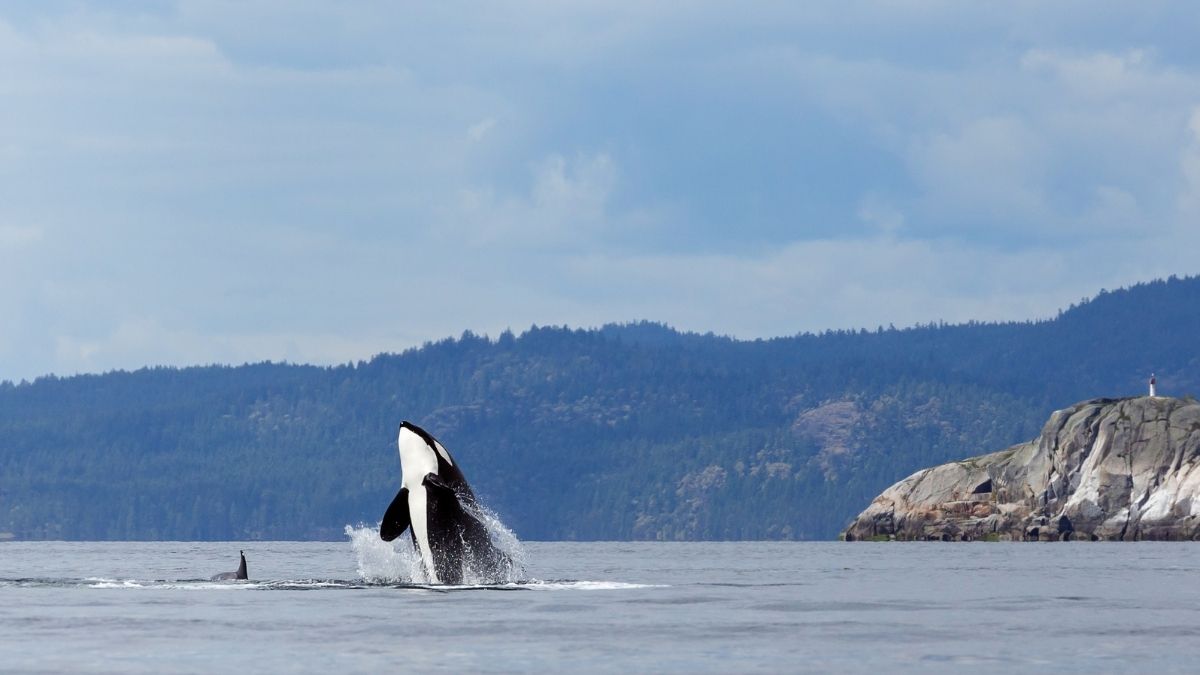 Orcas, also known as killer whales, are an iconic marine mammal, particularly in the Pacific Northwest. In addition to having complex social structures, deep emotional connections, and incredible intelligence, these mammals are predators that feed on a variety of fish and other marine mammals. There are ten recognized ecotypes of killer whales that all have different diets and habitats and each specific population even has their own language and culture. Three of these ecotypes are found in the waters off of the Pacific Northwest.

While they are called killer whales at times, orcas are actually the largest animal of the Delphinidae (dolphin) family. There are 38 different species in this family and members include Pacific white-sided dolphins, pilot whales, and the bottlenose dolphins. Those in the Delphinidae family use echolocation to find their prey or communicate, have cone shaped teeth, and can be found in a range of ocean habitats.

Orcas In the Pacific Northwest

These orcas are named residents because they typically have a small home range that are focused on areas with large fish populations, as their diet is primarily made up of fish. On both sides of the North Pacific, there are two communities of resident orcas, the Southern and Northern orcas. Southern Residents almost exclusively eat salmon and those off the coasts of Russia and Japan tend to prefer salmon and mackerel. But residents in Alaska have been known to eat multiple fish species like salmon, halibut, and cod.

If you’ve lived in western Washington in the last few decades, you probably know of the Southern Resident Killer Whales (SRKW), as they spend several months out of the year in Washington’s Puget Sound. These orcas were listed as endangered under the Endangered Species Act back in 2005 and nowadays, their population has been in the 70s for the past few years. These orcas unfortunately faced a huge blow to their population in the 1970s, when it was common for people to capture some of these mammals for marine parks. This practice of capturing and then removing orcas from their pod and habitat was extremely stressful for all the southern residents, as these animals are highly social and emotional. They also spend their entire lives with their families so to break those families apart is particularly traumatic.

Due to a variety of threats, resident orcas have some declining populations. This is particularly true for the Southern Resident Killer Whales in the Salish Sea, as the declining salmon population in the area means these orcas are losing their primary food source. The SRKW population also never recovered from events like the Penn Cove Captures in August 1970. In addition to talking about the ethical ramifications of keeping captive orcas in marine parks, the film ‘Blackfish’ talks about the history of capturing orcas for parks off the coast of Washington.

Sound disturbance is another threat to killer whales because like other members of the Delphinidae family, these predators use echolocation to hunt and communicate. With the loud sounds of boats, ferries, and ships, it can be difficult for the orcas to hear. Ship strikes are also concerning for orcas for rather obvious reasons.

Bigg’s Orcas, also known as transient orcas, are another orca ecotype in the North Pacific. Unlike residents, these orcas frequently travel over long distances, usually from southern California to the Aleutian Islands of Alaska, and have a diet primarily made up of other mammals. They’ve been known to eat harbor seals, minke whales, stellar sea lions, and Pacific white sided dolphins. There’s even anecdotal evidence suggesting they occasionally eat moose and deer.

These orcas also differ from resident orcas in pod size, hunting styles, and vocalizations. They tend to live in smaller but still matriarchal pods and don’t vocalize as much while hunting, as their prey can actually hear them. In order to sneak up on prey, Brigg’s orcas are rather stealthy hunters. Because of the Marine Mammal Protection Act of 1972, the main staples of the Brigg’s Orca diet have thrived, which has allowed for the transient orcas to also thrive.

The last ecotype are offshore orcas, which are often found 15+ miles off shore. Not much is actually known about these orcas, as those in the North Pacific weren’t even discovered until 1979. But it’s believed that their diet consists of sharks and large schooling fish and are usually seen in groups of 20+. Offshore orcas are thought to be more closely related to resident orcas, as they look more similar to residents and vocalize frequently too. Studies have also concluded that these orcas are also more genetically similar to residents.

These orca ecotypes are iconic marine mammals and while they might seem the same, there are some drastic differences, particularly their vocalizations, dorsal fins, diet, habitat, and pod size. Despite their differences, orcas are protected under the Marine Mammal Protection Act of 1972. But while transient orcas have thrived since the act was signed, resident orcas, especially southern residents, have had their populations decline over the decades.

Organizations and communities all over the Pacific Northwest have worked to protect these animals and the Salish Sea and are great resources if you’d like to learn more. Up in Canada, the Georgia Strait Alliance and the North Coast Cetacean Society are two organizations dedicated to working with communities on orca research, awareness, and conservation. As mentioned, The Whale Trail is a series of sites from California to British Columbia that allow folks to try and see marine life from land! And in Washington, the Orca Network, Orca Conservancy, and the Center for Whale Research also work on outreach and research.

Have you seen an orca out in the wild? Let me know in the comments!

6 comments on “The Different Types of Orcas”