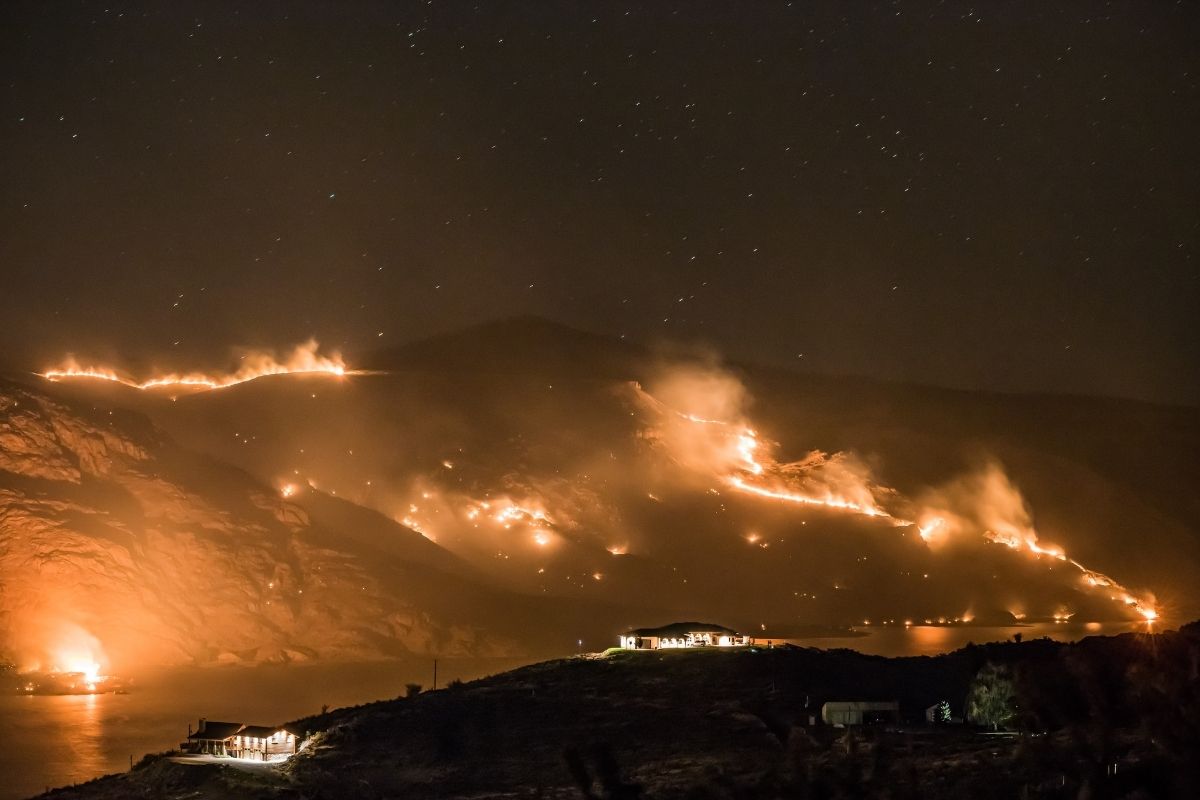 For the past few years, wildfires along the west coast of the US and Canada have been burning hotter, faster, and longer during the summer months. The National Interagency Fire Center, self-described as the country’s support center for wildland firefighting, has a map that shows just how many wildfires there are in the American West. And across the border, British Columbia is currently battling nearly 300 wildfires. While there have been evolutionary adaptions and surprising benefits to fires, the current wildfires and related trends are having severely negative impacts on people, animals, and ecosystems.

Wild animals have a long relationship with fires, as both are natural parts of different landscapes. At the beginning of a fire, animals won’t just wait to perish, as many have naturally learned to flee or hide. Birds fly off, mammals run, and amphibians and some small creatures have been known to burrow in the ground or take cover under rocks. Larger animals like elk can also take refuge in streams or lakes.

However, some animals are just unable to outrun the fires or their previous ability to survive a fire isn’t a match for the hotter and larger fires we’ve been facing the past few years. Hotter fires mean that even animals that burrowed to escaped flames may perish because of high heat. In addition to the obvious deadliness of flames and heat, smoke pollution can cause serious health issues or even death to all sorts of living creatures. Wildfire smoke can contain thousands of individual compounds and the exact combination is based on factors like what’s being burned, the temperature, the fire producing it, and the distance from the fire. One study on the 2018 Camp Fire even found dangerous levels of lead in smoke being blown downwind of Paradise.

Historically, fires aren’t necessarily a good or bad thing for some ecosystems and plants. Some species, for example, require fire or have adapted to a fire regime. Heat can help some fungi release spores while some tree species need fire to help release and germinate seeds covered in a tough coating. Plus, ecosystems that have been burned, for example, become entirely new habitats after fires and that reset can help an old forest be born again. Wood-boring beetles go out of their way (sometimes even traveling 40+ miles) to find recently burned forests and there is a cascading domino effect of other species that follow them.

While there can be ecological benefits and species adaptions to wildfires, large and uncontrolled fires can have an incredibly damaging effect on the people, animals, and ecosystems nearby. For the ecosystems that are burned, some negative effects include high levels of soil erosion, biodiversity loss, air and water pollution, and an increased vulnerability to other natural disasters. Without trees, shrubs, and other vegetation to slow runoff and help soak up excess water, floods can be more frequent and can cause more damage.

The current rate at which wildfires are growing in size and intensity are true signs that the climate crisis is here and now. Over the last several decades, climate change has brought increased drought, rising global temperatures, smaller snowpacks on mountains, and varying weather patterns. These changes have allowed for ‘a perfect storm’ for the larger and more devastating fires we’re currently facing.

Now that wildfires are getting larger and lasting longer, it’s getting harder for people, animals, and ecosystems to survive. These larger and longer fires are also faster and hotter, which means that even species that have adapted to or thrived after fires are struggling. If that wasn’t enough, wildfire smoke can and has traveled far and wide, often bringing toxic compounds and pollution with it.

It can be easy to be pessimistic and just accept that this might be our new reality and it’s only going to get worse. But during these times, it’s important to remember that there are still plenty of ways to make a difference. Organizations like Intersectional Environmentalist and The Sunrise Movement are fighting against climate change through an intersectional lens and can often use support. Individual changes in lifestyles can be helpful, like composting, going zero waste, or planting pollinator-friendly gardens.

There’s also the fight against fossil fuels and similar projects (like Line 3), as large corporations are the world’s biggest polluters. Fossil fuel production, mining projects, agribusiness, and other corporate activities have been responsible for disasters like oil spills, toxic contamination of water and land, and even massive wildfires. In order to make a difference in the fight against climate change, corporations, politicians, and governments all need to be held accountable for the damage they inflict on the world and severe lack of action.

While much of the west coast is currently covered in smoke, it’s important to remember that anger and hope can coexist. Be angry that the climate crisis is here and threatening the planet but be hopeful that things can change. Use how you’re feeling to propel you into action! Support environmental justice organizations and mutual aid groups. Call and write to your elected officials (on every level!). Talk with friends about the issues and how they’re involved in the fight.

How are you surviving this wildfire season?

4 comments on “The Effects Of Wildfires”

The Climate Crisis and the Green New Deal.