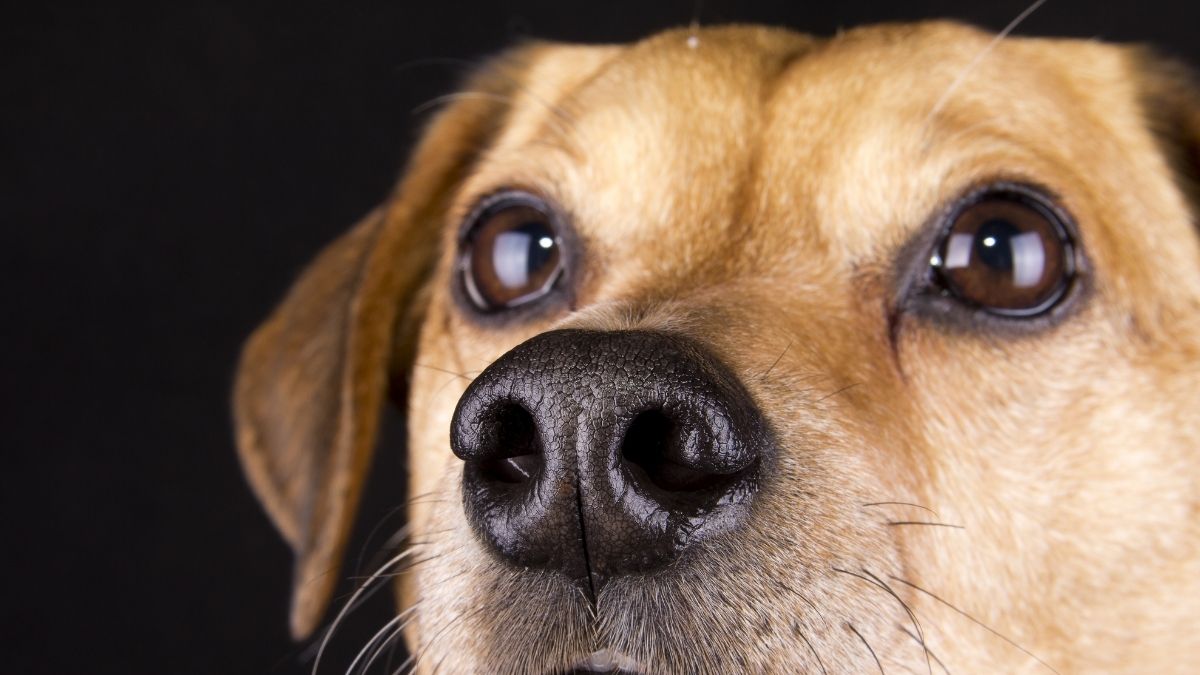 There are many amazing things about dogs and their impressive sense of smell is definitely one of them. With up to 300 million olfactory receptors in their noses (50 times more receptors than humans!), dogs can actually smell some odors in parts per trillion and can even detect a teaspoon of sugar in a million gallons of water. Some breeds have an even better nose than others and have worked in search and rescue, hunting, drug or bomb detection, and more!

There are so many interesting facts about a dog’s nose. Dogs, for example, can both smell in 3-D and can smell the passage of time. Their noses are designed to allow dogs to separately smell with each nostril, which allows their brains to use those different odor profiles from each side to allow the dogs to form a 3-D olfactory image. They can also detect minuscule reductions in odor molecules that happen over time, which allows them to quickly figure out which direction to follow.

The anatomy of a dog’s nose is incredibly interesting. A dog’s nasal cavity is divided into two separate chambers that open into their two nostrils. Scent particles and compounds are trapped both on their nose and in the mucous of the nasal cavity to further help dogs process them. Dogs also have an olfactory recess at the back of their noses that’s filled with delicate bones covered in mucus membranes and olfactory neurons.

There is so much to learn about the canine snout that a Norwegian professor wrote an entire book about it! ‘Secrets of the Snout: The Dog’s Incredible Nose’ by Frank Rosell (and translated by Diane Oatley) takes a look at the evolution of the canine’s unique nose and how dogs are able to detect different odors.

If you’ve ever had a dog, there’s a chance you’ve been surprised by your dog’s wet nose poking you to get your attention. While an effective attention grabber, their signature wet noses are a big reason dogs have an impressive sense of smell. A dog’s nose often has a thin layer of mucus and saliva that helps to draw in and trap tiny scent particles. Thanks to the additional olfactory organ called Jacobson’s organ, dogs can simultaneously smell and taste scents so by licking their noses, they’re able to further investigate different smells.

Despite the old wives’ tale, it’s perfectly normal for a dog’s nose to be dry at times. If they’ve been sleeping for a long period, for example, their nose will be dry because they haven’t been regularly licking it. Some breeds, particularly brachycephalics, tend to have slightly drier noses and the same goes for senior dogs too. However, a dry nose starts to be concerning if it goes on for a prolonged period of time or if there are any lumps, bumps, cracks, or nosebleeds.

Some Breeds Have Better Noses (And Often Use It For Good!)

Breeds like beagles and German Shepherds will often have a better than average sense of smell compared to other dog breeds. Bloodhounds actually have one of the highest numbers of scent receptors compared to other breeds and other physical traits, like loose/wrinkled skin, drooping ears, and lock neck, all help the breed with its scent tracking ability. While not every individual dog of a specific breed will be good at scent-related jobs, other breeds that are generally good at scent work include Border Collies, American Pit Bull Terriers, English Springer Spaniels, and Nova Scotia Duck Tolling Retrievers.

For breeds with plenty of energy, desire to work, and a strong sense of smell, scent work can be a great activity you and your dog can do together! While scent work can be a great hobby for dogs that are kept as pets, there are plenty of dogs that make sniffing out things into a profession. There are dogs that work as mushroom hunters and help sniff out truffles, a special and expensive kind of mushroom that grows underground. Other dogs also help track endangered species, which allows scientists and conservationists to follow and better study difficult-to-find species. Tucker the lab is a great example of this kind of working dog and helps sniff out the poop of orcas off the coast of Washington! Tucker is a part of Conservation Canines, a program developed by UW’s Center for Conservation of Washington.

But sniffing out truffles or following endangered species aren’t the only jobs for dogs with a great sense of smell. Detection dogs can actually work in a variety of settings and have been known to sniff out substances like drugs and explosives. But it doesn’t stop there! Dogs have also been trained to detect medical issues like high or low blood sugar levels for diabetics and even some types of cancer.

Search and rescue teams in a variety of environments have been known to use dogs to help find people and there are actually dogs trained for specific purposes. Tracking and trailing dogs try to find a particular lost person through the person’s unique odor and work in a variety of terrains with different distractions and distances. Similarly, wilderness dogs are trained to locate the exact source of human odor over an expansive area of wild terrain. Disaster/urban search dogs are used to locate people buried after natural disasters or building collapses. Frida the rescue dog became a symbol of hope because of her work finding people after the deadly earthquake that hit Mexico in 2017. Lastly, there are Human Remains Detection dogs, also known as cadaver dogs, that are trained to find any sort of human remains, from an entire deceased body to any tiny part of a decomposing body.

While there are some dogs with noses bred specifically for scent work, there are other breeds with significantly shorter snouts. Brachycephalic dogs, a term that means ‘short-headed’, often appear to be flat-faced because of how small their noses are. These dogs and other short nose dogs are prone to health issues like elongated soft palates, brachycephalic airway syndrome, hypoplastic trachea, and difficulty breathing or cooling off. Those conditions are why some consider the trend of continuing to breed dogs to have extremely flat faces to be unethical.

Breathing can be difficult for short nose dogs, which often leads to loud snoring or heat exhaustion. Summertime can be difficult for brachycephalic dogs, as their short snouts and flat faces make panting hard. For dogs, flat faces have drastically changed their bone structure and created a tight maze for air to navigate. Compared to dogs with long noses, brachycephalic dogs end up with less air making it to their lungs every breath. If you have an English Bulldog, pug, or another brachycephalic breed, there are some ways you can help keep them cool in the summer, like always having cool water available, using a harness, and not leaving them outside in hot weather for long periods of time.

A dog’s nose is powerful and complex, an evolutionary powerhouse that has allowed them to build 3D images out of odors and detect how much time has passed. There are some breeds with a better ability to smell, thanks in part to artificial selection, while other breeds have been bred to have shorter snouts and flat faces. The development of brachycephalic breeds has resulted in many dogs having difficulty breathing and there are some that are calling for an end to the breeding of brachycephalic breeds with extremely short noses for health and wellness reasons.

But some dogs have such an incredible sense of smell and a certain level of training that they are able to help locate missing people, people buried under buildings or debris, or even detect medical issues like hypoglycemia in diabetics. Even dogs that wouldn’t be good at scent-related jobs could benefit from scent-related games, as these games allow for dogs to use one of their most powerful senses!

Ultimately, dogs have been bettering our world for thousands of years, one scent at a time.

0 comments on “La Vie En Nose: What You May Not Know About Your Dog’s Nose”